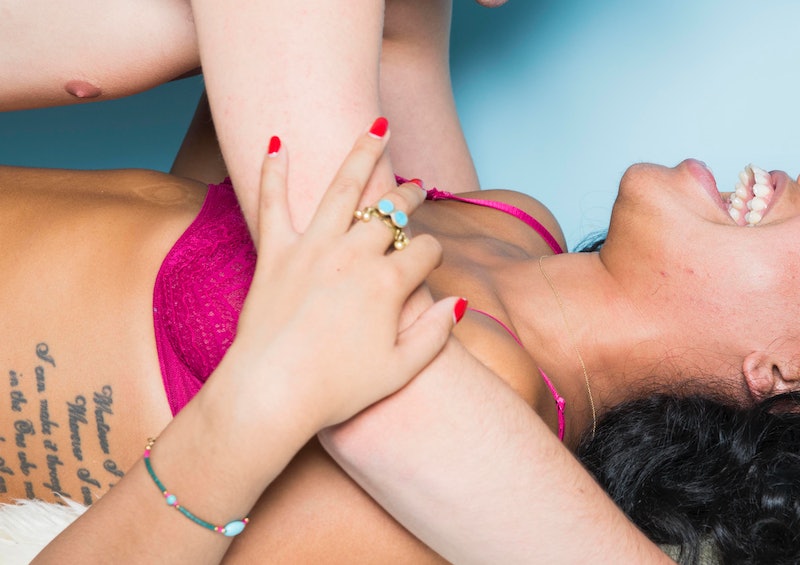 Have you thought about your nipples lately? Aside from recent ventures into the news for the Free The Nipple campaign, people often don't pay much attention to these highly sensitive parts of their body. They're one of our erogenous zones, and are part of the same set of arousal signals to the brain as the cervix, vagina, and clitoris. (If your sex partner is neglecting your nipples, you're likely missing out.) Nipples get a lot of attention in pregnancy, largely because your nipples get more sensitive, but they deserve a bit of love the rest of the time too — because our nipples can actually tell us about our health.

Nipples aren't the window to the soul, but they can be pretty good signals of particular health conditions and changes to the breasts and hormones. And no, there's no need for concern if yours are droopy, pronounced, small, big, hairy, whatever. The real reason for you to sit up and pay attention to your nipples is if they suddenly change in any way: if your breasts are tender, if your nipples produce something different, look a new shape, suddenly invert, hurt, or your nipples become sore or itchy.

Sensitive nipples are nothing to ignore. Dr. Nancy Elliott, MD, FACS, and founder of the Montclair Breast Center, tells Bustle, "Get to know what your normal nipple looks and feels like. Pay attention. Stay connected to your body because what you are looking for is a change." Next time your nipples feel sore, or otherwise do something inexplicable, don't panic, and talk to your doctor about what might be going on.

If your are experiencing sensitive nipples, read on for what it could mean for your health.

Soreness in the nipple area is one of the clearest folk medicine signs that you're pregnant. But, crucially, it won't just be the nipples that get sore: it will be the whole tissue of both breasts. The tissue in this part of your body is very sensitive to hormonal shifts, and pregnancy is one of the biggest upheavals your body's hormonal system will ever have. Breasts become heavier because pregnancy hormones increase your blood volume. That said, you may just be menstruating or about to get your period. So, no, these changes do not guarantee that you're pregnant. Pee on a stick for certainty in that area.

Yes, you can get thrush of the nipples — and it can hurt like the blazes. Nipple infections are more common than you think, particularly if the skin on your nipples is already cracked or vulnerable because of eczema or jogger's nipple. It's most commonly seen during breastfeeding (babies have dirty mouths), but itchy or sore nipples in people who aren't pregnant are a possible sign that the nipple may be infected, with thrush or some other kind of bacteria, and you may require antibiotics.

"Itchy nipples are not cause for concern if none of the above are present, but it’s a reminder to make sure you have had a recent mammogram and ultrasound," Dr. Elliott says.

3. "We Shouldn't Be Bleeding Unless You're Breastfeeding"

Of all the several types of discharge we'll get to in a minute, the one that may cause you most concern is bloody discharge. It's a sign that something's gone a bit wrong, but the scale of the problem can vary pretty widely. Bloody discharge is pretty common in people who are chestfeeding, and is, hilariously, called "rusty pipe syndrome" — but it usually goes away pretty quickly.

Other possible causes can be a bit more serious. One is mastitis, an infection of the breast tissue. Another could be an intraductal papilloma, a small, benign tumor of the breast that forms inside the milk ducts that lead to the nipple. Both are easy to resolve (though you need to see a doctor and likely have surgery for the second one). It may also, however, be caused by a carcinoma in some part of the breast — in other words, cancer. "Fluid or bloody discharge [that] comes out when you’re not squeezing," says Dr Elliott, means you should go to the doctor.

This sounds kind of gross, but it's actually not all that worrisome. Mammary duct ectasia, which is most common in women over 45, happens when a milk duct in your breast widens and gets clogged. It's painful and a bit startling, but it's not a sign of cancer.

Ectasia may turn into mastitis, infection of the breast, which isn't surprising considering that a key part of the fluid circulation of the breast is being clogged. But it does mean other symptoms: pain, swelling, and itching, plus a possible inversion of the nipple. It'll likely go away with antibiotics, though if it's really stubborn, the blocked duct may have to be surgically removed. It's not very common, and, like many of these nipple-related problems, will clear up with a visit to your GP or gynecologist.

If the only sign you've ever had of changing color in your nipples was when you first developed breasts in puberty, this might freak you out — but it's not terrible news, generally speaking. "Nipple darkening over time is not a concern," Dr. Elliott tells Bustle. Darker nipples are related to hormonal fluctuation in your body. They tend to be associated with pregnancy, and, interestingly, aren't just confined to the nipple: skin changes related hormonal fluctuation can happen all over your body.

Essentially, the hormone that causes the body's pigment to darken — the melanin-concentrating hormones — can be triggered by changes in the rest of the hormone cycle. Your nipples will get darker, as will your freckles, moles, and other areas that are already darker than anywhere else. So don't freak out.

6. Nipples That Are Suddenly Inverted Are A Cause For Concern

If you've had an inverted nipple since birth, it's no biggie. But a nipple that has suddenly inverted — i.e., suddenly turned inward as opposed to poking outward — may be associated with the development of breast cancer, and you need to get it checked out.

There are exceptions. An inverted nipple is caused by the breast tissue being contracted and pulling it inward, which can be caused by a variety of things, like genetics, a blow to the breast, or pregnancy. If it's suddenly happened, though, the rule is to go get it checked. It may be Paget's disease of the nipple, a kind of breast cancer.

"Is your nipple now inverted when wasn’t last month? Does it point to one side where it was straight in the past? Is it red and/or seems to have a crusty rash that doesn’t go away after 2 weeks? These are all cause for concern," says Dr. Elliott, as they can be symptoms of cancer. If inversion happens, see a doctor as soon as you can.

Nipples are also quite sensitive things, so soreness may be because of irritation or the lovely condition known as "jogger's nipple." Friction against the nipple while you're exercising can cause it to get sore, red and itchy, or have its skin flake off. Recommended fixes include better sports bras, non-chafing balms like Vaseline, and covers applied to the nipple area before you exercise.

It may, however, also be a sign of what's called "contact dermatitis," or extremely sensitive skin inflamed by some particular substance. If you've got hurting, itchy nipples, think back: did you recently change your shampoo, body lotion, soap, bath oils, laundry detergent, or anything else that could come into contact with your nipples? If so, stop it and see if the situation resolves itself.

8. Medications Can Also Cause Nipple Changes

Interestingly, some psychological medications are known to cause nipple reactions. Various antidepressants, from SSRIs to MAOIs, have been linked to nipple discharge, as have standard anti-psychotics, some anti-histamines, amphetamines, hormones, and some varieties of the Pill.

Herbal remedies have also been shown to produce harmless breast discharge in some women, from fenugreek (which was, historically, used to promote milk flow and help digestive problems) to anise and fennel. So if you suddenly discover a soaked part in your bra, think back to whatever herbal fixes you've been taking recently, and always check side effects before you nab something at the market.

Many adult women will, when they squeeze their nipples, see some kind of discharge. It's normal; these are milk-making machines, and even if you're not pregnant, you'll likely have a bit of fluid in there anyway. But discharge that's unprompted can actually be a pretty good way of signaling other problems in the body.

"Nipple discharge is common in women. We often see [it] during mammogram when women’s breasts are compressed," says Dr. Elliott. "But discharge should not come out spontaneously without squeezing. This can mean there is a problem. Breast cancer can present as spontaneous nipple discharge, but it's uncommon."

There are seven different types of discharge that the breast can create, and the causes depend heavily on which one's happening to you. They are: milky, sticky, pus, watery, yellow, pinkish, or bloody. (Not as fun as the Seven Dwarves, I know.)

The milky discharge of anybody who's not pregnant (pregnancy is, for obvious reasons, associated with new milk production) can be a sign that you've developed hyperthyroidism, a condition of the thyroid where it over-produces thyroid hormones. There are a lot of other symptoms for that, though, so milk on its own isn't a clear sign. In a tiny proportion of people, it may also mean a tiny pituitary gland tumor, inside the gland in the brain that controls human growth and development. But in most people, this is benign, and a visit to the doctor will clear it up.

"Nipple discharge, whatever color, that keeps on coming and stains your nightgown or bra needs to be evaluated. It could be as simple as a polyp in the duct (called a papilloma). Again, seek advice from a breast specialist," says Dr. Elliott.

If you do notice any sudden changes in your nipples and can't find an explanation, it's important to get them checked out — and, as Dr. Elliott tells Bustle, a mammogram is essential, particularly when you're over 40. "Early detection is so important, and it happens only if you go every year for a mammogram." Keep all your health checks up to date and know what your normal nipples look like, and you'll be able to nip any issues in the bud. Pun intended.

This article was originally published on November 2, 2015