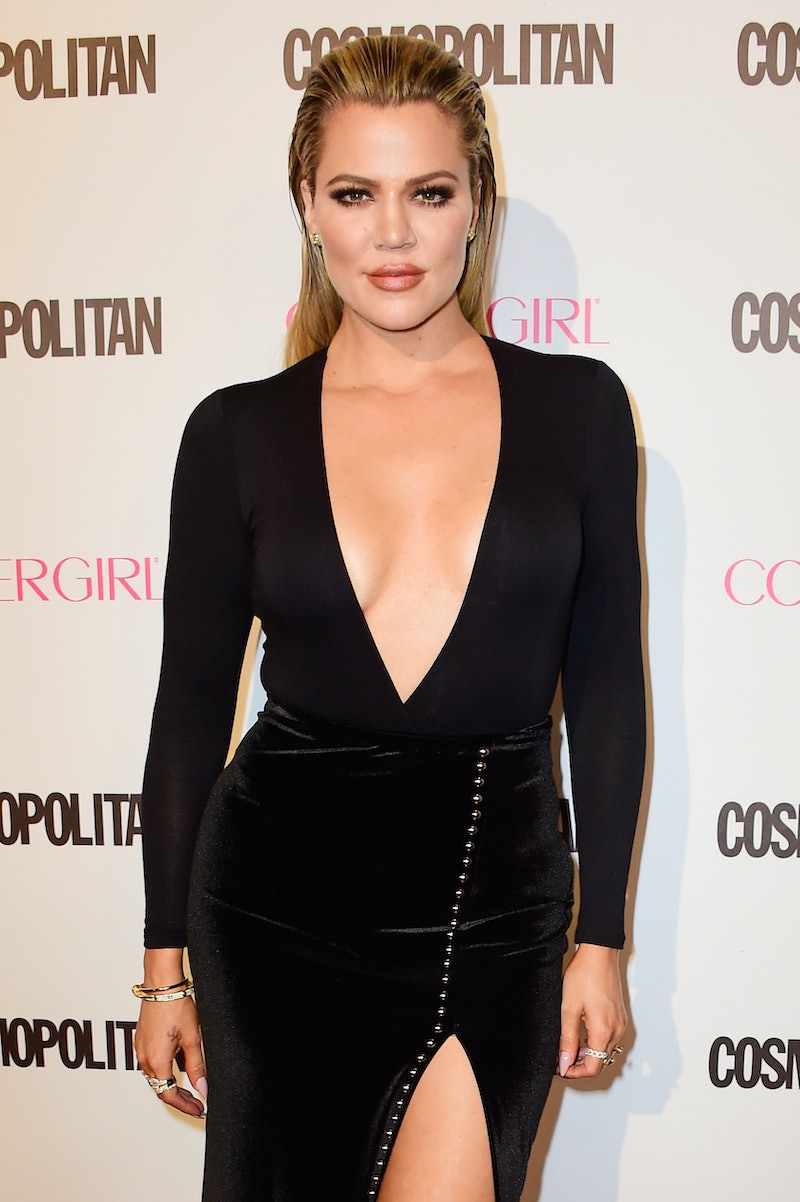 It's official: If you're ever in a crisis, Khloé Kardashian is the person you want on your side. Since Lamar Odom was found unconscious at a Nevada brothel on Oct. 13, the 31-year-old reality star has been at his side through his recovery, regardless of their currently complicated relationship status. And being there for someone you care about sometimes means making sacrifices, even when those sacrifices include changing up the way you celebrate a holiday. This year, Kardashian spent Halloween in the hospital with Odom, trading in parties and costumes for a low-key night in.

On Saturday, Kardashian tweeted a photo from the hospital where Odom is recovering to wish her followers a happy Halloween. There was still a pumpkin and still candy (including Twizzlers, which are the best), but from the background of the photo, it's easy to see the hospital setting.

Later, Kardashian filled in a Twitter follower about her Halloween plans, and even though she did give up dressing up this year, it sounds like she was fine with it.

Shortly after Odom was found, he and Kardashian called off their pending divorce — but not because they're romantically involved. As Kardashian put it in an interview with People, for now, they're just each other's "support system," and if they decide to get back together, that's something they're going to deal with later.

Odom's rep, Eve Sarkisyan, released a statement to Us Weekly after he was hospitalized, which reads, "Family and friends are extremely concerned for Lamar. Please don't listen to the false information being circulated unofficially. Please respect the family's privacy during this difficult time."

Kardashian and Odom shared a significant amount of time as a married couple, and it's awesome that they're able to put aside whatever differences they had to focus on Odom's healthy now. By all reports, it sounds like the NBA star is in for a long recovery, and whether they're together romantically or not, Kardashian's friendship could be key in keeping Odom going.

Not all sort-of-former-married-couples could make a situation like this work, but Odom and Kardashian are proving that it's possible. It's so sweet that she was able to be there for him so he wouldn't have to spend a holiday alone. Khloé has always been my favorite Kardashian, but this is earning her even more awesome points in my book.

More like this
Kim Kardashian Father’s Day Tribute To Kanye West Called Him “The Best Dad”
By Stephanie Topacio Long
Dan Levy’s Father’s Day Pic Of Dad Eugene Spoofs The ‘Schitt’s Creek’ Vet’s Past
By Grace Wehniainen
Prince William & His Kids Are Adorable In A Smiley New Photo For Father’s Day
By Stephanie Topacio Long
Selena Gomez Is Fine Being Single, But She Still Manifested Romance On 'SNL'
By Martha Sorren, Jake Viswanath and Jack Irvin
Get Even More From Bustle — Sign Up For The Newsletter