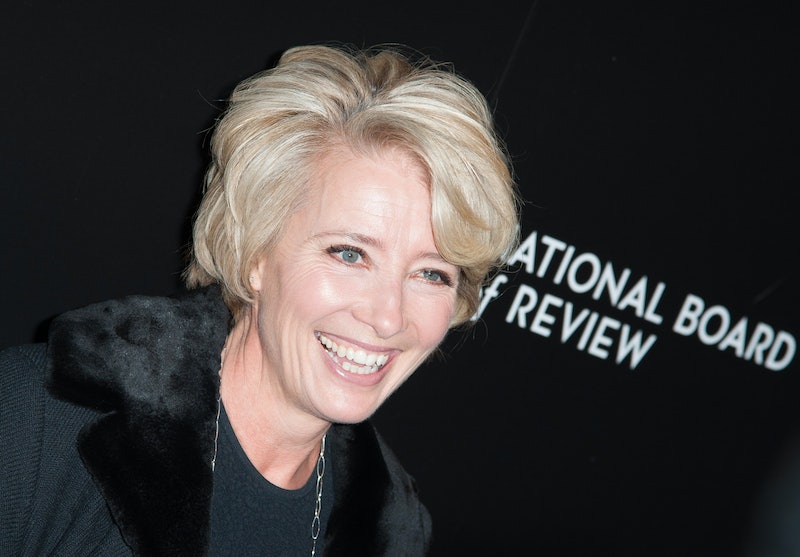 Actress Emma Thompson wants to shake things up a bit in the acting world. Speaking to the Telegraph, the Saving Mr. Banks star says that she wants gender blind casting to be what follows the theater community's embrace of color-blind casting. And while it sounds lovely, Thompson's idea is slightly flawed.

Of course, Thompson isn't just flying off the cuff — her statements were inspired by last year's all-female staging of Julius Caesar in London — and as such, she's focused on the malleability of the classics. "Is the heroic role unisex? ... Or does it mean there is an area of life which remains unexplored, which contains stories which remain untold?" It's an interesting question, surely, but one that seems primed for experimentation rather than common practice.

Yes, classic heroic roles are almost 100 percent male, which brings about a natural curiosity — would the story remain the same if a woman were the hero instead of a man? The slight issue is that by slating women in roles written for men and men in roles written for women is that it can only be a means of exploration, not equality.

And that's because casting women in traditionally male roles — gender blind, as Thompson suggests — means that the role will already be determined before the actor or actress is cast. Thus, in the case of Thompson's desire to play Sherlock Holmes someday, Thompson would be taking on a masculine role, which isn't necessarily promoting equality. Instead, it's promoting the idea that in order to level the eons of play writing that favored men, women should assume a male-centric role, when it's more likely that equality would come out of creating more heroic roles that celebrate women without asking them to crawl into the box male heroes have drawn for them.

It seems likely that Thompson meant her suggestion in a more exploratory sense — after all, she asks if the heroic role is unisex — but she does touch on the equality issue as well. "I would love to play a character like [Sherlock Holmes], but that’s a problem if you’re a female. I’m always likely to be overlooked for not being male," she says.

Thompson's frustration with the lack of roles (like Holmes) available to women is certainly understandable — with so many incredible male roles throughout literary history, the imbalance is almost painful. And relating to a character, regardless of that character's gender, is the result of good writing and as such, isn't uncommon at all. However, it hardly seems constructive to simply have women play these roles meant for men when literally rewriting (for stage, screen, and the page) the idea of what it means to be a hero is is so much more powerful.

We're seeing changes in the definition of a heroic role on the big screen with characters like The Hunger Games' Katniss Everdeen, who defies the stereotypically flat "bad ass lady hero" roles and instead occupies a space that is decidedly that of a woman and that of a commanding hero — and she's done so in mainstream film, a seemingly rigid realm.

Thompson is a smart, incredible actress, so it's not that her suggestions should be dismissed. Casting the classics without regard for gender is a surefire way to refresh texts and plays that have been tread over again and again for hundreds of years. But if Thompson wants to play a role like Sherlock Holmes without being discriminated against for being a woman, perhaps she and her audience would be better served by her using her infinite smarts to create a character that satisfies that heroic curiosity bottled up inside of her, and explores the notion that a Holmes or Julius Caesar really could have been a woman.

More like this
At 28, Emma Thompson Was Already A Star — But Unhappy In Love, Actually
By Olivia-Anne Cleary
Netflix Settles With Mo'Nique After She Sued For Racial & Gender Discrimination
By Jake Viswanath
Daryl McCormack On His Unusual First Audition With Emma Thompson
By Olivia-Anne Cleary
Everything To Know About 'Scream 6'
By Jack Irvin and Jake Viswanath
Get Even More From Bustle — Sign Up For The Newsletter