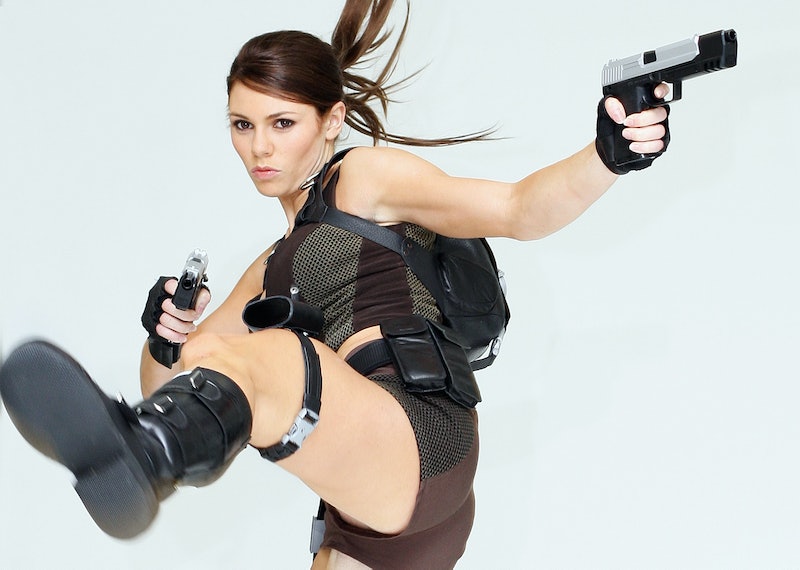 With the upcoming PS4 and Xbox One release of Tomb Raider: Definitive Edition, chatter about Lara Croft, the long-running video game series' heroine is back. The PlayStation blog has some new images to add fuel to the fire and in the new game, the heroine once criticized for her impractical clothing and unattainable body image is returned to her youth with an athletic body actually pulled from nature, rather than the unstable Barbie testing facility that spit out her original teenage-boy approved shape.

Croft also has more practical garb (below), opting for long pants (like her fellow heroine Wonder Woman) over the skin-tight booty shorts she's sported since her first game outing in 1996. But the most notable change for pop culture fiends like ourselves might just be the uncanny resemblance the rebooted character shares with The Hunger Games heroine Katniss Everdeen.

While development for Tomb Raider: Definitive Edition began as early as 2010, thus eliminating the notion that developers simply copied the popular movie franchise character for the new game, the resemblance is undeniable. Croft obviously has to keep her signature tank top for die-hard fans, but from the bow and arrow slung across her back to her makeupless, dirt-smeared visage, and of course her long side ponytail resembling Katniss' side braid, she looks as if she could slide into the Capitol and fight alongside Jennifer Lawrence's beloved character. Resemblance aside, the new and improved Tomb Raider signals a shift that's been a long time coming in the larger entertainment bubble, not just in film: a heroine that women can truly get behind.

While Katniss stands out as one of the shining beacons of feminist characters in 2013, she represents a relatively new character in the mainstream film landscape: from the audience standpoint, she's a heroine prized purely for her strength, agility, and wisdom rather than her sex appeal or likability that the people of The Capitol demand. Her appeal stems from the ways in which she defies superficial expectations and while the new Tomb Raider hasn't completely shed her vixen image, she enjoys a similar push towards empowerment over image.

Of course, the problem with original Lara Croft wasn't that she was necessarily anti-feminist — the character was marked by her fierce independence, fearlessness, dedication to her career, and extensive education that served as a foundation for her badassery. The issue was that physically, she was clearly created as a sexual object and even while she was solving the great mysteries of the universe, climbing impossible objects, and fighting actual tigers, she was still mainly "hot."

With the genesis of the new Croft, the focus is on her athleticism and her dedication to survival. Unlike previous games, which put Croft in contact with few women, Tomb Raider: Definitive Edition even passes the feminist-leaning Bechdel test, according to Forbes writer Carol Pinchefsky who reviewed the early PC version of the game in March. Croft even rescues a woman who's technically a princess, turning the age-old hero's tale on its head.

A change of this magnitude for a character who's existed for almost two decades is a symptom of a much larger shift under the pop culture umbrella because it's one that took time. Even when we consider only The Hunger Games and Tomb Raider, their feminist-friendly characters were actually conceived long before the hive mind decided they were the new norm. The Hunger Games books, after all, were published back in 2008 and, again, the new Tomb Raider game began development in 2010, meaning the ideas about what a heroine should be were shifting long before Jennifer Lawrence became the beloved face of the movement.

Sure, Lawrence is the reason this image of a woman in action is plastered on lunchboxes and backpacks, serving as a refreshing pop culture alternative to the Barbies and Bella Swans of the world for young girls, but the idea that the world needed heroines like Katniss and the new Lara Croft had to have been percolating — in very separate segments of pop culture (film, gaming, and literature) — for years.

And while the emergence of The Katniss era is not everything — film is still lacking gender balance, gaming stubbornly remains somewhat of a man's world, and 2013 media was still rife with obstacles for women — it simply shows that the seemingly small blips on our feminist pop culture radar might just have a ripple effect we can't yet fathom. Change is not instantaneous, but these franchises prove then when it comes to empowered women, it's not just a one-off either.