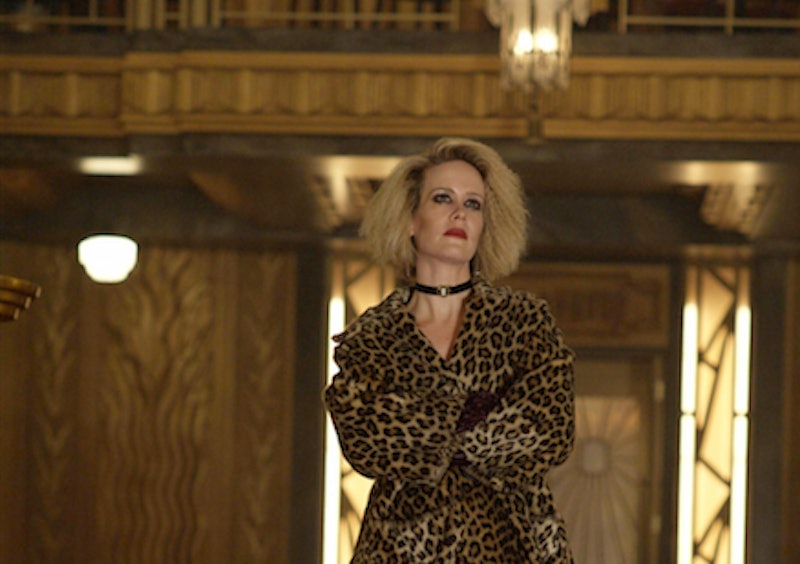 There's a lot of weird stuff going on in American Horror Story: Hotel , but the weirdest of all may be the relationship between the undead Hypodermic Sally and Detective John Lowe. John, the most recent new tenant in the hotel, has had a few encounters with Sally and each of them has featured an odd kinship between the two. When John Lowe wakes up after seemingly imagining a serial killer dinner party, Sally tends to his needs and tells him "I am your protector" and one episode earlier Sally was making some weird comments regarding the 10 Commandments and aggressively attempting to seduce the soon-to-be divorced detective, almost relinquishing him to the addiction demon — All the while saying "You and I were meant to be" before vanishing. So, what is going on?

Everyone in the Hotel Cortez seems to be a kindred spirit, either in personal history or through similar addictions like heroin or murder. While John Lowe has yet to partake in any of the events that are closely associated with life at the Hotel Cortez, he has an inexplicable draw to Hypodermic Sally. I have a few outlandish theories as to how they are connected, but "outlandish" is par for the course In the Hotel Cortez.

She's Training Him To Be The 10 Commandments Killer

There's already a theory that Sally is the 10 Commandments Killer, but this theory doesn't hold a lot of weight. However, there are some hints that Sally could be trying to turn John Lowe into the 10 Commandments Killer to finish the work that former murderers who have committed commandment-based crimes have started. It seems that Sally may have been collaborating with James March on this one, as she took care of him after the serial killer dinner party where March explained that he has taught the craft of killing to every "great" serial killer in history.

John Lowe's An Alcoholic & Sally Gives Him To The Addiction Demon

The Addiction Demon made a big impression in the pilot episode, and has since been lurking in the background of the series without doing much aside from making occasional ominous appearences. Sally has, so far, been the cause of death for at least three tenants in the hotel (Gabriel, Donovan, and Iris) by helping them succumb to their drug of choice. While John seems to have no interest in needle-based narcotics, he does have an affinity for alcohol. Perhaps Sally is getting close to him with the intent of "feeding" him to her demon friend.

Alright, this idea is kind of crazy but so is everything else that happens in AHS: Hotel. Firstly, the subject of mother-son relationships comes up a lot in the series from Iris and Donovan's estranged relationship, to Alex Lowe's greif over her missing son, to Hazel Evers' tragic loss of her son. Even the Countess has a motherly hold on all of her subjects. With the theme of mother-son relationships gone wrong so rampant throughout the season, how much more "wrong" could a mother-son relationship get than to pull the classic Oedipus trick? American Horror Story hasn't shied away from incest before, and it would give that "I am your protector" line a whole lot more meaning.

Nothing is as it seems in the Hotel Cortez, so there's no guarantee that any of these theories will come true. However, we can likely expect something frighteningly absurd to happen between Sally and John at some point — and I can't wait.