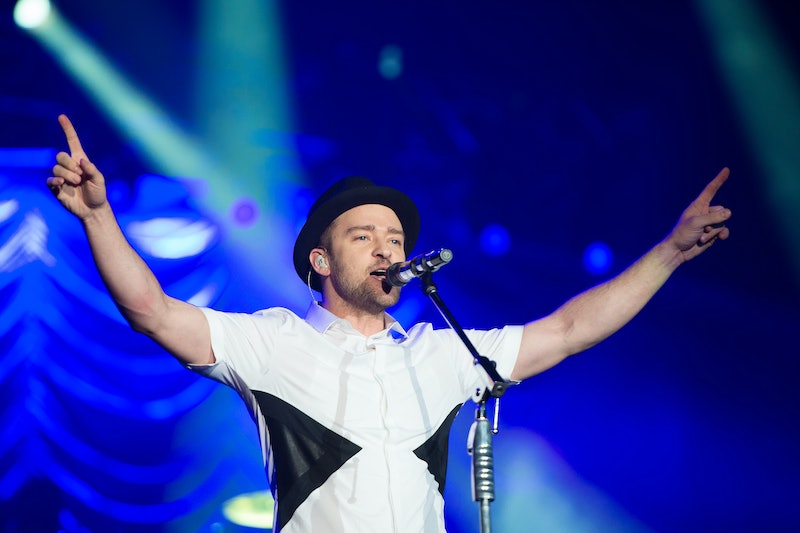 It's time to trade in your suit and tie for a pair of cowboy boots and a 10-gallon hat. Justin Timberlake will make a special appearance during Wednesday night's broadcast of the 49th Annual CMA Awards to perform with country singer Chris Stapleton. Whether you like country or not, I bet you're now Googling "how to stream the CMA Awards," aren't you?

That is, of course, because no single living thing on this Earth — and let's be real, in this galaxy — can resist Timberlake's charm. But still, you have to wonder why the Country Music Association would ask a singer who cut his teeth on pop and has since verged into more soulful territory to appear on what has been dubbed "Country Music's Biggest Night."

However, when you think about it, this billing makes a lot of sense. For one thing, Timberlake's hometown is Memphis, Tenn., which has served as the birthplace for many a country music star. And really, watching Timberlake's Star Search performance from when he was just a wee lad is all the proof you need that country music is in his DNA — and that he would eventually be a big star someday, of course.

But if you watch the CMA Awards Wednesday night at 8/7c on ABC, you'll get even more than Timberlake out of the deal, if you can believe it. Carrie Underwood and Brad Paisley will again serve as hosts for the ceremony. Basically every contemporary country music star will be performing or presenting or both, from Kacey Musgraves to Miranda Lambert to Luke Bryan. And some artists are even going to walk away from the night with awards.

Do you want to find out who? Then be sure to either watch the telecast live on that thing called a TV set, or live stream it one of these ways below.

Stream The Show Before The Show

Every awards show worth its weight in gold has a red carpet broadcast, and the CMA Awards is no exception. AT&T will be streaming the CMA Awards red carpet before the show starting at 6 p.m. EST through a special website dedicated to the event. Though it won't be the same as live streaming the actual awards ceremony, this special won't just be about who your favorite stars are wearing. Don't worry. Those interviews will still be present, but the show will feature performances by Hunter Hayes and Jana Kramer, as well as give viewers a chance to earn prizes by predicting the night's winners through an online ballot. If you're not able to stream the awards show, that would definitely make up for what you missed out on.

Streaming Is As Easy As ABC (But Not Really)

As far as the actual CMA Awards ceremony goes, one of your only options is to live stream the show through ABC's website or the Watch ABC mobile app. However, there are many drawbacks to these two options. For one, live-streaming ABC is only available in certain cities. For another, you have to have log-in credentials for a participating TV provider in order to live stream the network's programming. What all of this means is you basically have to get ABC through your cable plan, and if that's the case, why would you need to live stream the CMA Awards, anyway? But it's there in case you need it.

Watch Cable Through Your Computer

Many cable providers also offer live streaming with your subscription. If yours does and includes live streaming of ABC, all you have to do is log-in on Wednesday night at 8/7c and get your country music on. Again, if you don't already subscribe to cable, you're kind of SOL, and if you do, why would you be live streaming the big show on your tiny smartphone screen. But at the end of the day, this is all about finding the best way to view "Country Music's Biggest Night" for you.

It's what Timberlake would want. I'm guessing.

More like this
Harry Styles' 'X Factor' Audition Didn’t Start Off As Well As You Thought
By Jake Viswanath
'RHOBH' Star Diana Jenkins’ Fiancé Asher Monroe Once Shared A Stage With Kelly Clarkson
By Brad Witter
What’s New On Netflix: 'Never Have I Ever' & 'Indian Matchmaking' Return
By Arya Roshanian
Everything To Know About The HBO Max & Discovery+ Streaming Service Merger
By Brad Witter
Get Even More From Bustle — Sign Up For The Newsletter