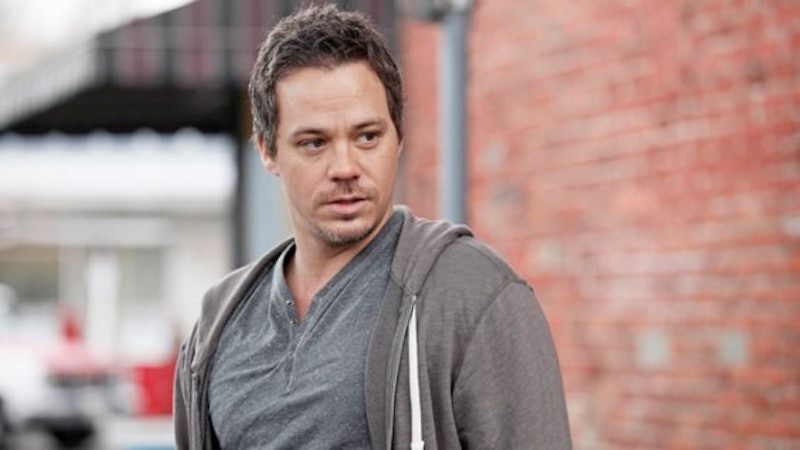 I watch Once Upon A Time every single week. But, friends, saviors, and Dark Ones, there's a big Neal Cassidy shaped hole in my heart. I watch a lot of TV, but for odd and magical reason, Neal's death back in OUAT Season 3 has had the most effect on me. Every episode, I tune in and can't help but think, "is this the episode where Neal comes back to life?" Tell me that same thought hasn't crossed your mind once — or, a half a dozen times — over the last two seasons. And even though all signs continue to point to "NO," I'm still thoroughly convinced that Neal could return to OUAT, even though he is 100 percent dead. Hey, stranger things have happened in Storybrooke, you guys.

Neal's return has been on my mind for a while. OK, it's actually been on my mind since the moment he died. But, I never thought that there was an actual chance he'd return until Episode 17, "Heart of Gold" in Season 4. This is the episode where Robin Hood and Marian (aka Zelena) leave Storybrooke and head to NYC. Coincidentally, Neal's apartment is free and they move in there. I don't live in NYC, but I know for a fact that apartments are kind of tight there, so yes, it is weird that this vacant apartment has been just sitting there for an entire Frozen-storyline.

Anyway. From that episode on, Neal started getting name dropped a lot. Not just a vague reference to him here or there every three episodes or so. No. He was brought up a lot. In Season 5 Episode 5, "Dreamcatcher," there were SIX references to Neal. He was called by name, he was called Baelfire, and Rumple called him, "my son." OUAT is not beating around any magical bush here; there's clearly some Neal chatter going on.

So, since I consider myself a (self proclaimed) Neal Cassidy historian, here's some light evidence suggesting he's coming back to Storybrooke.

Resurrecting Neal Was Henry's First Thought As The Author

When Henry gets his magical pen to write stories, he asks a few general questions, and then cuts right to the chase: Can he bring his dad back?

The answer is, sadly, no. Because, according to The Apprentice, dead means dead in Storybrooke. Except for all those other times dead has not meant dead in Storybrooke, but that's neither here nor there. But, just because Henry can't bring Neal back with the pen, doesn't mean he can't figure out how to use his mighty pen in another way and bring him back.

And, yes, I know Henry broke the Author's pen, but he is still ~technically~ the Author.

Weird That Emma Used Dreamcatchers To Erase Everyone's Memory, No?

Mid-way through Season 5, there's still no telling what Emma is up to with her evil Dark One plans. It appears as if she erased everyone's memory via dreamcatcher. Yes, that's weird. Also, why the heck are there dreamcatchers in Camelot?

Regardless of that, dreamcatchers are important to her because a dreamcatcher meant that her and Neal were home. He even kept their dreamcatcher from being on-the-run in his NYC apartment, something Emma later found. Emma could have chosen any sort of horcrux (or whatever the dreamcatchers really are) to erase everyone's memory, but instead she chose this talisman. Oddly specific choice.

Hook Is NOT Father Material

Emma and Hook are an item (even though they're on the rocks right now). Listen, I love Hook just as much as everyone else, but I do not love him as a father figure to Henry. Hook has done a lot of bad stuff in his life. Sure, he's slowly reforming himself now, but he's still got the weight of all those burdens, and Emma knows that. So does Regina.

In "Dreamcatcher," when it's revealed that Henry's got a crush on Violet, Hook immediately steps in to offer up advice about girls, and Regina shuts. him. down. He is not going to give any sort of dating advice to her son. The fact that Regina flat out refused to let Hook father Henry in any way suggests that there's still no one around to fill that father void. Yes, David steps in from time to time, but he's "gramps" and has his own baby (named Neal) to care for.

Season 5 of OUAT is being plagued by this song. Sorry the tune is now stuck in your head again. It's a totally random song choice, and didn't make any sense. That is, until Emma and Henry had a heart to heart, and it was revealed that this was one of Neal's favorite songs, and his go-to for wooing the ladies (I thought this was his go-to, but, *shrug*). Maybe this is like a Beetlejuice thing where if it's played three times, Neal comes back? Also, isn't it a little bit weird that we continue to learn details about Neal, postmortem?

Other Characters With Neal Connections Are Coming Back

OUAT is stacking up the guest stars for its 100th episode in the spring. Cora is set to return, Sydney is going to come back, and AHEM, so is Peter Pan, who — in case you've forgotten — is Neal's grandfather. The 100th episode would be a prime time for him to return.

Or, August might come back into play. Five seasons in, and we still don't exactly know how August and Neal knew one another. The folks behind OUAT have suggested they'd love to bring August back to explore this story, and heck, at this point I'd be fine with a few quick Neal flashbacks showing what happened to both of them in the Land Without Magic.

Listen, I'm not a betting woman. However, the odds are in Neal's favor right now. If simply for the fact that he keeps being referenced, multiple times, during each episode. It appears as if it's a trend that's not going to die down anytime soon. It's cruel to toy with my emotions if the payoff isn't going to be Neal in the end.

And no, I have no idea how/why he could come back to life, but that's not even the point right now. Something's brewing for him in Storybrooke. So, when it finally happens, any audible scream you hear will be me.