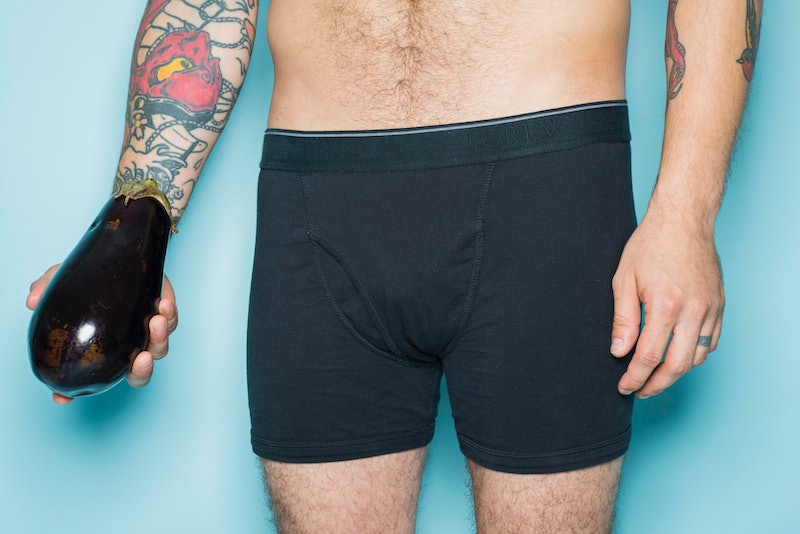 The penis hasn't exactly had the roughest of rides through history. It's actually dominated far more than it probably should; in ancient Greece, for example, prominent doctors like Galen thought that the female sexual organs were just inverted penises, because all of humanity was obviously just a variation on a dude. And the worship of the phallus has been part of many cultures for thousands of years. If you ever go to the annual Japanese Penis Festival in Kawasaki, complete with giant sacred phalluses hauled by hundreds of worshippers, you'll only be experiencing one modern incarnation of a seriously old worldwide practice.

Like most really important objects in cultures, penises have gathered myths, legends, and seriously misguided ideas about their health and welfare for thousands of years. And superstitions about the penis continue to collect around the world. For example, the linga, the emblem of the god Shiva, is now thought to be an ancient phallic symbol, derived from a myth where Shiva's penis was cursed and set on fire (yeesh). And there's a genuine psychological condition called koro, most commonly found in Indonesia, Japan, and India, where the sufferer is pathologically convinced that his penis is shrinking and retracting into his body, and understandably goes into hysterics about it.

Is a penis ever just a penis? Not if it's collected by witches, covered in the fluid from an eel's gall bladder, or being punished by God, it isn't. Here are four widespread myths about the penis from history. Hey, at least "size does matter" wasn't one of them. (Although, yes, there were also many different ideas about what the ideal penis looked like throughout history.)

According to David M. Friedman's A Cultural History Of The Penis , one of the biggest worries in medieval Europe about the powers of magical women was their control over male potency and the member itself. And apparently the most magically-inclined ladies could wreak sincere havoc on penises by spiriting them completely away from their owners.

Friedman records that in the famous German witch-hunter's manual of 1486, the Malleus Maleficarum (or Hammer Of Witches), one witch apparently gathered a whole bunch of penises from different men and kept them in a nest in a tree. The book says:

“And what, then is to be thought of those witches who in this way sometimes collect male organs in great numbers, as many as twenty or thirty members together, and put them in a bird’s nest, or shut them up in a box, where they move themselves like living members, and eat oats and corn, as has been seen by many and is a matter of common report?"

Apparently, if so inclined, they could restore members to people who'd lost them, out of these penis-stocks. It gives a whole new meaning to the word "hoarder".

If you go to the Roman section of the British Museum in London, your eye might be caught by a particularly bizarre section of wind chimes that seem entirely NSFW. They're Roman tintinnabula, wind chimes designed to warn away bad luck and the evil eye, and many of them are gloriously phallic: my favorite one, pictured, was excavated from the remains of the city of Pompeii, and shows a flying phallus with a penis-tail. If that won't deter bad vibes, what will?

Penises were widely seen as good luck in the ancient Roman empire, but the Greeks had their own way of doing things. If you were traveling in Greece and wanted to avoid trouble, you could just look out for a herma — a roadside or public sculpture of a head and male genitals. They were everywhere in ancient Greece and the most prominent ones were revered, worshipped, and regularly rubbed down with oil. Get your mind out of the gutter.

The ancient Egyptians devote an entire myth to the reconstruction of the god Osiris's penis, which had been dismembered with the rest of Osiris's body by the god Set. Apparently this is the reason that the famous King Tutankhamun's mummy was embalmed with an erect penis; it was meant to mimic Osiris, the most powerful god in Egyptian mythology.

But it's in their magic spells that the ancient Egyptians really came into their own when it came to the lore of the penis. There's one particularly spectacular example where a woman's fidelity to her partner can be assured if he combines a crow's egg and the gall of an eel in a potion and rubs it on his penis. (If it was meant to be an aphrodisiac, I'm pretty sure it wasn't going to work.)

Funnily enough, one possible ancient Egyptian practice — the consumption of white and blue lotus flowers, which were sacred — may actually be of medical worth: it's increasingly being shown to help with male erectile dysfunction.

Myth #4: God Can Punish You By Getting Your Penis Stuck Inside Your Partner

The phenomenon of penis captivus — where a male member gets literally trapped inside a woman after or during intercourse — is very rare and not very well understood (physicians think it might be a combination of too much blood flow to the penis and tightened muscles in the vagina), but it does sometimes happen. But a BBC investigation into the idea in 2014 uncovered a particularly spectacular medieval myth where getting stuck wasn't physiological: it was a divine judgement.

According to French nobleman Geoffrey de La Tour-Landry's Book Of the Knight of the Tower , which, bewilderingly, he apparently put together to instruct his daughters on courtly manners, a gentleman named Pers Lenard "dealt nicely with a woman in a church on an altar" one night. Insulted, God "tied them fast together that night" and the following day, "like a dogge and biche togedre". The poor couple were only unbound from their coital knot when the whole town had seen their predicament and prayed over them. And you thought your mother finding your stash of pictures of Zac Efron was embarrassing.