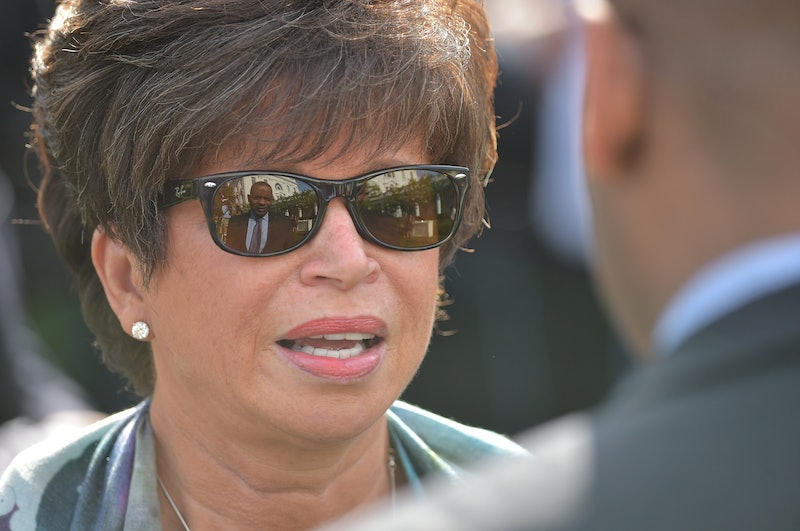 In this Tuesday's edition of Lenny, the twice-weekly feminist culture newsletter from Lena Dunham and Jenni Konner, Valerie Jarrett wrote a thoughtful essay about the problems our society faces as a result of inadequate restrictions on gun ownership. Jarrett, who is Senior Advisor to President Barack Obama and the Chair of the White House Council on Women and Girls, focused her essay on the ways that lax gun laws in the U.S. can have fatal consequences for women who experience domestic violence.

Besides highlighting the dangers women face as a result of our current gun laws, Jarrett's essay, "We Need To Keep Guns Away From Domestic Abusers," also noted the meaningful progress women and certain states have been making in recent years in order to create positive change. Because women are more likely to be the victims of domestic violence than men, the issue of gun violence becomes an important one for women's rights. Jarrett's essay shows that gun laws in the U.S. are a women's rights issue, and one that warrants a greater deal of attention and action.

The essay is as personal and moving as it is highly informative. Jarrett shared her own experience working with women who have suffered gun violence at the hands of their partners, and cited frightening figures which reveal just how much our country needs stricter gun laws for domestic abusers. Here are some of the most alarming takeaways related to guns and domestic violence. They show just how important stricter gun laws are for women's rights.

The Number Of Women Who Experience Domestic Violence

Jarrett stated that approximately one in four women in the U.S. has been the victim of violence in the home by a husband, boyfriend, or ex. Her source is the National Domestic Violence Hotline, which went on to say that the figure refers only to "severe" physical violence.

Jarrett wrote about how hundreds of women are killed with guns each year by partners who had already abused them at home. In fact, women who are already the victims of domestic violence who are murdered by their partners are more likely to be killed with a gun than all the other means combined.

Federal Law Does Not Take Guns From Convicted Abusers

There are laws that can be passed on the state level that take guns away from those convicted of domestic violence crimes. But on the federal level, legislation only dictates that domestic abusers cannot purchase guns after their conviction. This means that many women are left vulnerable to partners or exes who had guns prior to their conviction.

A 2014 study by the Center for American Progress found that states which implement universal background checks for gun purchases see 46 percent fewer partner-related gun homicides. Jarrett noted that the power of the gun lobby has made it extremely difficult for Congress to fund further research or to take action that would prevent guns from being sold to abusive individuals.

It's Not Just A Gun Safety Issue

Jarrett wrote in her essay that we need to reframe the conversation around gun laws in the U.S., and focus on the repercussions for women who are the victims of domestic violence, rather than exclusively on gun safety as the answer to the violence problem. Jarrett encouraged readers to help shift the conversation to one in which we find ways to keep guns out of the hands of domestic abusers.

States Are Beginning To Take Action