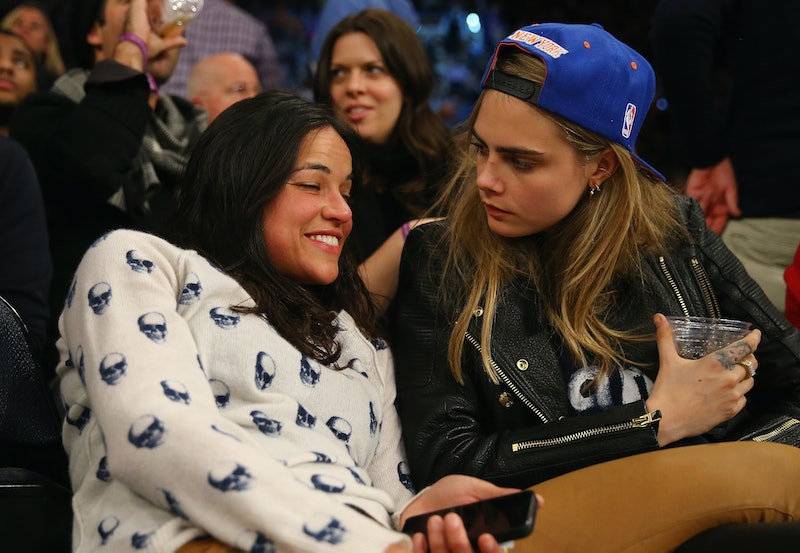 Cara Delevingne has become quite the basketball fan and Michelle Rodriguez has become quite the fan of ye olde whiskey. Cara Delevingne and Michelle Rodriguez attended a New York Knicks basketball game last night and made out courtside. Or at least they kissed. Maybe. They definitely got drunk, particularly Rodriguez who was photographed slouching down in her seat, throwing all of her hair in front of her face, and wearing two hats. But all of these things are harmless compared to smoking an e-cigarette while sitting courtside which they also did and which is pretty obnoxious.

While multiple sources have claimed that Rodriguez and Delevingne "made out," none of the photos released from the event show this. It wouldn't be that surprising if they kissed. Delevingne, who attended her first basketball game with Rihanna a couple days ago, has been pretty generous with her kissin' recently.

The photos do show that both Rodriguez and Delevingne smoked e-cigarettes and attempted to blow smoke rings. Rodriguez can be seen slouched very low in her seat with her head hanging back puffing smoke (or steam?) into the air and the faces of the people behind her. Maybe this would fly in the nosebleed section, but to do this in the front row is just plain annoying. It's distracting to fans and disrespectful to the players. I'm confident that basketball players are able to remain fully focused on what they're doing, but to act like this literally right in front of them is just plain rude. It would be like smoking an e-cigarette and drunkenly fidgeting in the front row of a play. You just wouldn't do it.

Obviously, the women have a right to smoke e-cigarettes and get drunk and goof off, but sitting in the front row is a pretty big deal. Courtside seats at Madison Square Garden are over a thousand dollars, so to sit there and do distracting things rather than pay attention is pretty offensive. It makes it look like they went just because they could afford it since they could smoke and get drunk anywhere they want. I know, I know. They can do what they want with their money, but why be rude? Why want to be rude? There's no reason!

Rodriguez's drunk face and Delevingne's looks of is-this-really-happening are actually quite entertaining, so ladies, keep that up if you must, but please don't smoke e-cigarettes courtside next time.

More like this
Rihanna Is A Mom Now After Giving Birth To Her First Baby With A$AP Rocky
By Ananya Panchal and Jake Viswanath
Are Tom Daley & Louis Theroux Bound For 'Strictly'?
By El Hunt
Marcus Rashford Took Inspo From Kravis For His Adorable Proposal To Girlfriend Lucia Loi
By Frances Stewart
Ryan Reynolds Brought Some Famous Friends To Wrexham A.F.C's Last Game Of The Season
By El Hunt
Get Even More From Bustle — Sign Up For The Newsletter