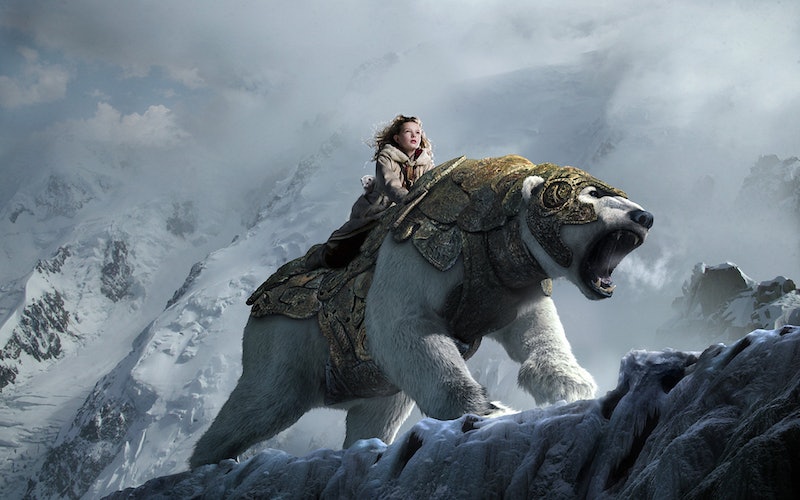 For fans of one YA fantasy series, the ultimate book nerd dream has come true. There's a His Dark Materials TV show in the works from BBC One, according to a Tuesday announcement from the U.K. network. Somewhere, a Bustle writer is cheering, "I called it! I called it!"

Don't go dashing off just yet, because I haven't even gotten to the best part. The BBC has commissioned the His Dark Materials series from — drum roll please — Bad Wolf and New Line Cinema. That's right: the producers behind Dr. Who and The Lord of the Rings will be the ones bringing Philip Pullman's intense fantasy world to life. Even better: Bad Wolf signed a first-look deal with HBO, which means there's a good chance you'll see Lyra and Will on the same channel as Jon Snow and Daenerys Targaryen.

Pullman's His Dark Materials books were wildly popular in the late '90s and early '00s. The Golden Compass, the first book in the series, was made into a big-budget movie flop in 2006 by New Line. Some fans may be disappointed to hear of the U.S. production company's involvement with the BBC project, but I'm keeping my hopes up. It's in New Line's best interest to ensure its TV adaption doesn't turn out to be a brilliant, CG failure.

Because His Dark Materials marks New Line's first foray into British television. Not screwing this up means more lucrative across-the-pond partnerships in their future, giving the studio the opportunity to make Blade 4 and maybe even — dare I dream it? — an Inkheart reboot.

For his part, Pullman seems enthused about the possibility of seeing his work on the small screen, saying:

In recent years we’ve seen the way that long stories on television, whether adaptations (Game Of Thrones) or original (The Sopranos, The Wire), can reach depths of characterisation and heights of suspense by taking the time for events to make their proper impact and for consequences to unravel.

The series is expected to air in five, eight-part installments, but there's no word yet on when we'll be able to catch the new series on TV. In the meantime, I'm now taking bets on which we'll see first: a His Dark Materials TV show or The Winds of Winter.