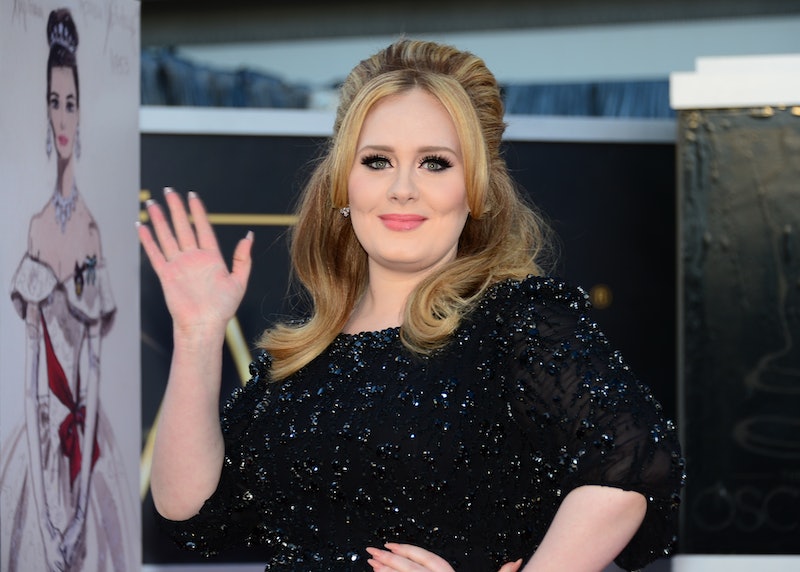 The Adele takeover is in full swing and I am ready for it. On Monday, news came out that the 27-year-old's single, "Hello" debuted at number one on the Billboard Hot 100. Not only that, she set a record for selling over 1 million downloads in a week. Not bad for so little promo, eh? The fact that she is even back on the scene was reason enough to celebrate, and according to Adele's December Rolling Stone cover and interview, her son Angelo was the one who inspired her return to music after an overwhelming few years in the spotlight.

The Rolling Stone interview gives a candid look at Adele, who is sassy, smart, humble, and still insists that she's "some random girl from London." Before opening up about her past few years out of the spotlight and the changes in her personal life, Adele admits that she tries to not take it all so seriously. She says things like: "My career's not my life... It's my hobby." Adele always makes it look easy.

But she does get honest about how drastically her life changed when she met her long-term boyfriend Simon Konecki and what happened after she got pregnant — timing she says was actually the best for her career.

When 21 was in the midst of its massive success, Adele herself was struggling to find herself within it all. In November 2011, she had had to undergo a vocal chord surgery that would put a halt to the rest of that year's performances, and she could not properly promote the album as she wished. She told Rolling Stone, "I felt like I'd lost control of my life at one point... The bigger that your career gets, the smaller your life gets." She then shared that after she won her six Grammys in February 2012, her voice was on the mend and she was planning a move to New York City... when she found out she was pregnant. She explained,

All my plans went through... It was like, "For good measure, let's see if I can cope with all of this and then having a baby." But I think actually the pregnancy was perfect timing in the end. It might've seemed like the most ridiculous time to have a baby, but I was starting to get a bit afraid of everything.

And what took away her fear? Her baby son, Angelo. She continued,

When I had him, it made everything all right, and I trusted everything because the world had given me this miracle, you know, so I became a bit of a hippie, an Earth mother. I don't know if I would've come back had I not had my kid.

D'awww! On behalf of everyone on Earth, thank you, Angelo, for inspiring your incredible momma to share her amazing talents with us, just once more. In fact, Adele is quite candid about her life as a mother in the interview, which is a different side of her than we have ever seen. She is no longer just a lovelorn girl wishing for her ex to come back, but a young mother who is confident and happy where she is. She explained,

I left, and I was like, "I don't want to wait until my kid is 16 to show him who I am." I'm very proud of what I achieved. And I wasn't, before I had Angelo. I didn't understand, actually, what I had achieved and how far I had come. Because everyone wants to do something with their life, and we don't all get the opportunity because sh*t gets in the way. So I feel f*cking so fortunate that the stars just aligned for me and allowed me to have the most ridiculous ride ever.

I don't think Adele has to worry about impressing Angelo with the incredible things she has already accomplished as a singer-songwriter. I think we will be loving his momma for a very long time to come.

More like this
Beyoncé & Madonna’s “Break My Soul” Remix Honors A Group Of Black Icons
By Stephanie Topacio Long
Lauv Is No Stranger To Taylor Swift, Drake, Ed Sheeran, & Fame
By Alyssa Lapid
Beyoncé Sent Flowers To “Masterpiece Genius” Madonna After The “BREAK MY SOUL” Remix
By Grace Wehniainen
Who Is Camila Cabello Dating? She's Getting Cozy With Lox Club CEO Austin Kevitch
By Radhika Menon
Get Even More From Bustle — Sign Up For The Newsletter