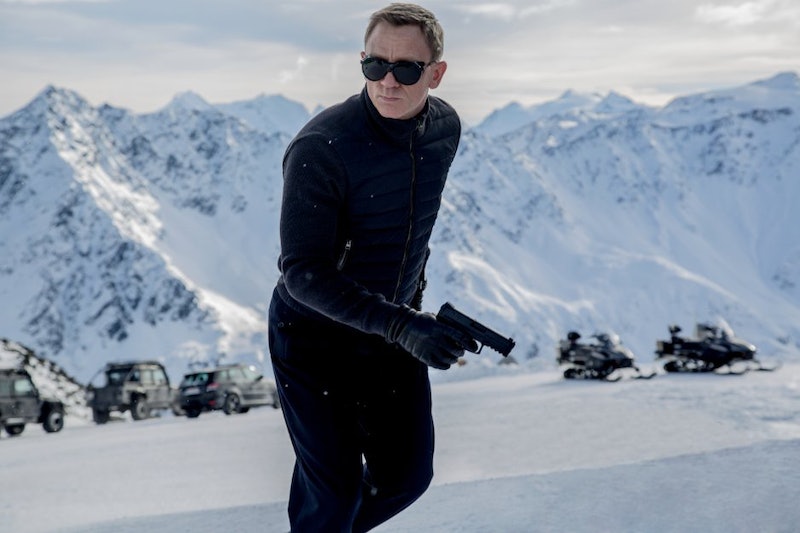 Daniel Craig is probably quite accustomed to stopping traffic. Metaphorically, as in he's a gorgeous human, and literally, in the capacity of renegade spy James Bond, who has broken a few windows and toppled a few buildings. Yet little of the thrill of Casino Royale, Quantum of Solace, or Skyfall could prepare for the grandeur of a pair of helicopter-based action scenes in the new film Spectre . The first takes place above Zocalo Square, deep in Mexico City, as a Day of the Dead parade files past below, while the second circles around London's landmark tower Big Ben. The scenes are sufficiently death-defying even without the huge populations swirling below the helicopters; add thousands of civilians to the mix, and the result terrifies and thrills. So how were the helicopter scenes in Spectre done?

As well as being the first scene in the movie, the Zocalo Square scene is the first in a series of daring stunts. Bond's modus operandi dictates he wreak as much havoc as possible while he stops in a city on the hunt for a baddie, and the action in Spectre is no exception. In addition to the helicopter scenes, Spectre also includes an Alpen plane crash, car chases and car crashes, and a fast-paced motorboat ride skimming over the Thames. The helicopter scenes, though, still divert most of the attention — there's a barrel roll. That helicopter flies upside down.

According to a behind-the-scenes video by Yahoo Movies, over 1500 extras were recruited for the Mexico City scene. The final product resulted from knitting together seven months of different shoots, director Sam Mendes told Den of Geek in an interview. Much of the actual stunt work was imposed on a CGI rendering of Mexico City after-the-fact, though not, as might be expected, because of concerns about the people milling about below.

Rather, Mexico City is 7500 feet above sea level, so the air is too thin at flight altitude for the helicopter pilot to perform many of the stunts. Filmmakers instead constructed the stunt scenes at lower altitudes, stitching in the Mexico City backdrop after the fact. According to the Radio Times, the fight scene (performed by body doubles, not Daniel Craig) was shot just 30 feet above the crowd of extras. 30 feet above the extras, and at a hair-raising proximity to another helicopter not shown on screen — the helicopter on which the camera was mounted to shoot the scene. The two machines were engaged in a swirling dance, with the second required "to sense where the stunt pilot is going to fly," Mendes told Den of Geek in the same interview.

Yet the struggle wasn't over even when Spectre had a shoot location for the Mexico City scenes. Even with proper air quality, there's only one type of helicopter — the Red Bull helicopter, the Radio Times reported — that can fly in the dizzying formations required for the scene. And that helicopter broke down the first day of filming, Mendes explained to Den of Geek. (The crew was able to resuscitate it in time, but it was a close call.) The result of months of preparation is an opening scene that defies gravity and has spawned incredulous headlines examining whether these scenes are even possible. In short, yes.

Not to be outdone, a later London-based helicopter scene finds Bond piloting a motorboat in pursuit of a helicopter down the Thames. It didn't garner quite the crowds of the Mexico City scene, but it did shut down the surrounding neighborhood from 7 p.m. May 17 through 5 a.m. May 18. Traffic and pedestrians were barred from the Lambeth Bridge for that period, according to the Mirror. The scene was shot between the Lambeth and Vauxhall bridges, and the pedestrians who couldn't cross the former congregated on the latter to watch the proceedings, according to the Evening Standard.

Part of the fun of a massive, CGI-assisted scene like those in Spectre is figuring out how the illusion coheres. Where does the real filming end and computer rendering begin? But there's also a certain measure of suspended disbelief inherent in watching a helicopter barrel-roll while two stunt-men in prosthetics cling to its exterior. Spectre won't show its whole hand, but has allowed just enough behind-the-scenes access to maintain healthy curiosity — and maintain a little of that cinematic magic.

More like this
Why The '365 Days' Sex Scenes Are Good, Even If The Movies Aren’t
By Arya Roshanian
Lisa Marie Presley Reviewed Baz Luhrmann’s ‘Elvis’ Movie On Twitter
By Grace Wehniainen
'Doctor Strange 2' Star Benedict Cumberbatch’s Net Worth Is Not An Illusion
By Hugh McIntyre
What Does Doctor Strange’s Third Eye Mean?
By Arya Roshanian
Get Even More From Bustle — Sign Up For The Newsletter