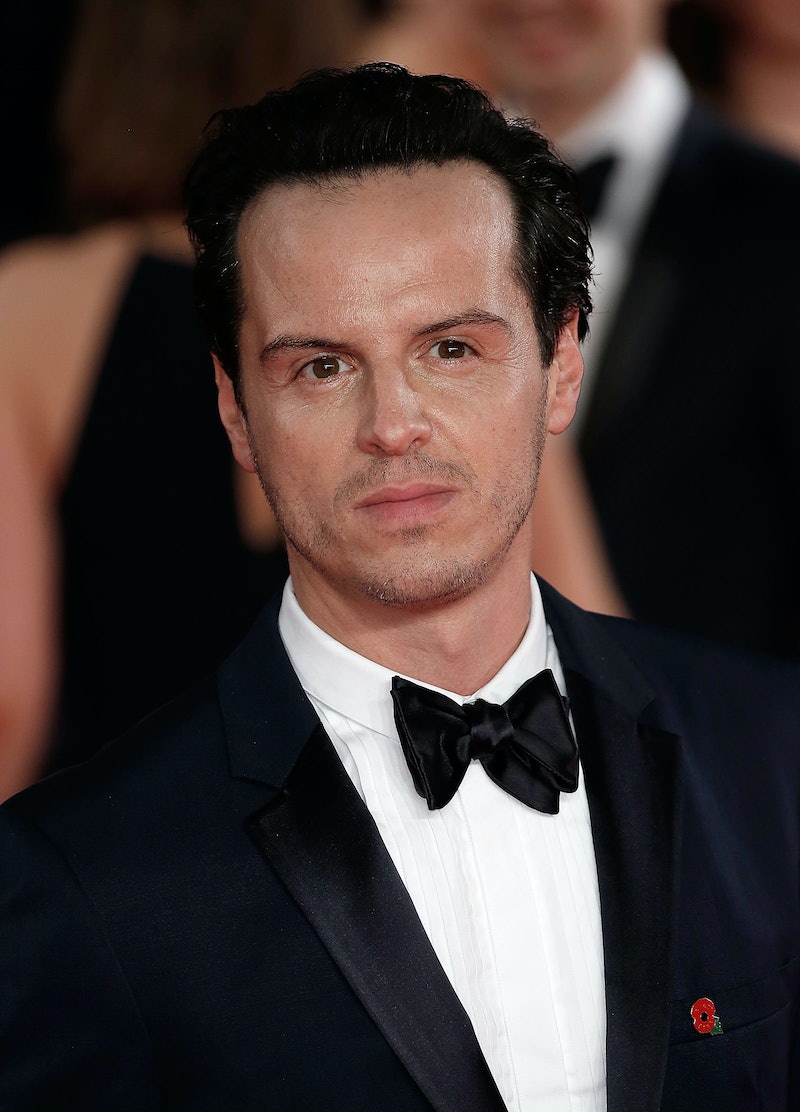 It is a widely known fact that a James Bond movie is only as good as its villain. The newest Bond movie, Spectre, has one hell of a villain in Oberhauser, played by Christoph Waltz. But, there's another character, seen only briefly in the previews, whose allegiances are in question: Max Denbigh. Max, also known as C, is either one of Bond's spy colleagues (aka, a good guy) or a potential villain, depending on who you ask. The nature of his character might be up for grabs, but regardless, Max Denbigh is certain to catch your eye when you see Spectre on the big screen. And, trust me, you're going to want to pay attention when I tell you who plays Max/C in Spectre .

Actor Andrew Scott is already considered a heartthrob by audiences across the world thanks to his breakout role as Jim Moriarty in BBC's Sherlock . For those of you not in the know, Moriarty is Sherlock's main villain, and boy, is he good at being bad. Scott has been steadily working as an actor since the '90s with roles in various movies and television shows, as well as an award-winning career on the stage — he even played "Soldier on the Beach" in Saving Private Ryan (1998). But now, as Scott prepares to launch a career as an international movie star with Spectre, the actor is about to become even bigger. Here's what's next for Andrew Scott.

Alice Through The Looking Glass

Scott will make the jump from 007 to the Mad Hatter in Disney's Alice Through The Looking Glass, the sequel to Tim Burton's live-action hit Alice in Wonderland. Scott joins returning stars Johnny Depp, Mia Wasikowska and Anne Hathaway to play Addison Bennett, a mysterious new character. Unfortunately, fans will have to wait until May 2016 to see his big Disney debut.

Scott also has a few more low-key movies on the horizon in 2016. Aside from Alice Through the Looking Glass, he will star in Swallows and Amazons, Handsome Devil, and appear opposite Downton Abbey's Jessica Brown Findlay and Tom Wilkinson in This Beautiful Fantastic.

As for the fate of his iconic Moriarty in Sherlock, there's no telling whether or not Scott will return to the BBC series in the upcoming Christmas special or fourth season. Scott returned briefly at the end of Season 3 — presumably bringing Moriarty back from the dead — but is not currently credited as playing a role in the Christmas special. Sherlock co-creator Mark Gatiss teased in an interview with Radio Times that Moriarty's return would be fully explained in the special, but refused to comment on the actor's role in the episode, saying, "Well, it's very hard to put a lid on Andrew Scott..."

Whether or not Scott returns to Sherlock, it's clear that Scott has more than enough projects up his sleeves.