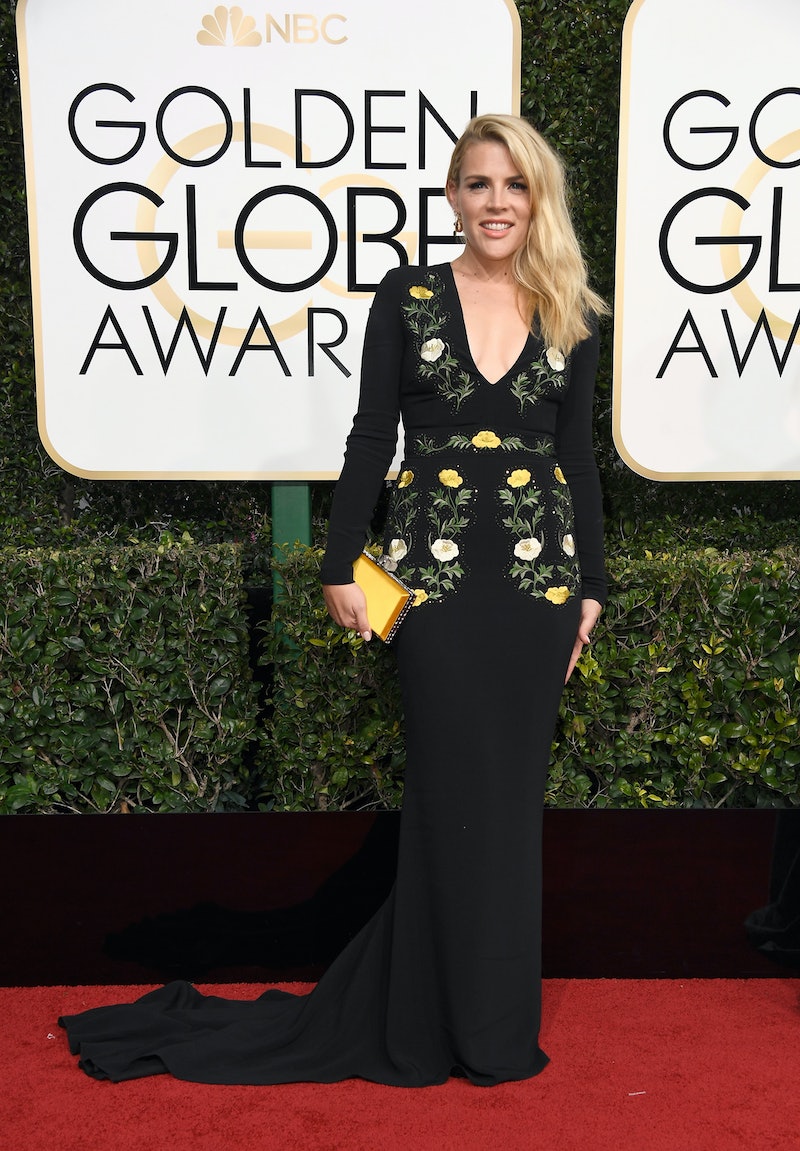 Cougar Town is five seasons in, and yet each year, fans of the low-rated show are still forced to list the reasons why the rest of the world should be tuning in every Tuesday night. It's funny, we argue. It's smart. It stars a former Friend. It encourages drinking. And still, too many people refuse to take a chance on the TBS sitcom, saying that the title sounds stupid (rebuff: so does Mad Men) and that it probably isn't even funny (rebuff: you're wrong.) Yet, over the years, as a diehard fan of Cougar Town , I've found that even the most hesitant viewers are convinced to watch by the mention of one aspect of the show: the presence of Busy Philipps.

For the uninitiated, Philipps, who co-stars as Laurie on Cougar Town, is kind of a national treasure. Over the course of her career, she's starred on all your favorite shows, befriended all your favorite celebrities, and become known as the kind of witty, likable, badass person we all wish we could be. Basically, Busy Philipps is the collective spirit animal of all who (wish to) know her. Five reasons why:

1. She's Been on Every Show Your Teenage Self Loved

Freaks and Geeks? Check. Dawson's Creek? Check. Undeclared? Check. During the late '90s and early '00s, Philipps was a key player on some of the biggest TV shows for teens. Her role as the bully-with-a-heart-of-gold Kim Kelly on Freaks and Geeks is her most memorable, but her turns on Dawson's Creek and Undeclared are just as loved by fans, years after both shows went off the air. In the last decade, Philipps has starred in Love, Inc, ER, and, of course, Cougar Town, but it's the roles she played as a teenager that she'll be forever known and idolized for.

2. And She Plays the Best Characters

Two words: Kim Kelly. As the tough, angry teenage girl on whose attitude hid a dysfunctional family life, Philipps made Kim Kelly a cultural icon and one of the best parts of Freaks and Geeks — and that's saying a lot when the show's considered one of the most beloved in TV history. Kim was a complex, frustrating character who, along with Linda Cardellini's Lindsay Weir, transcended the typical limitations for teenage girls on TV. She was funny, she was bold, and she was the kind of girl we all secretly wished we were. No post-Freaks roles Philipps has played have been quite as cool as Kim, but some have gotten pretty close; the loud, unpredictable Audrey was the best part of Dawson's Creek later seasons, and Cougar Town's Laurie is the craziest, most fun character in a show featuring people who drink wine all day and forget they have jobs. There's no argument: Philipps' characters are the best.

Philipps's film career may not have caught Oscar's attention just yet (sorry, White Chicks), but that doesn't mean she's not a frequent presence at award shows. Why? Michelle Williams, Academy-Award winning actress and Philipps' longtime best friend, who takes the Cougar Town star as her date to many of the biggest events in Hollywood. Williams and Philipps met on Dawson's Creek, and in the years since, they've given female friendships a damn good name. Williams is far from Philipps only awesome friend, though; Masters of Sex star Lizzy Caplan is Philipps' daughter's godmother, and Philipps is on a first-name basis with Seth Rogen and James Franco. Feeling jealous yet?

Philipps is one of those celebrities, like Alyson Hannigan or Violet Affleck, that always seems to be happy. She smiles in every photo, tweets gorgeous vacation views, and takes criticism in stride (on backlash to naming her daughter Cricket: "It's weird people think my kids will be in therapy because of their names. Guys, my kids will be therapy for LOTS of reasons"). One prime example of Philipps' enthusiasm? Her intensely intricate, weeks-long Christmas celebration, in which she positioned tiny elves in unique situations around her house to her daughters' delight. The elves' mischief, which Philipps documented on Twitter and Instagram, included everything from ziplining to snowman-building. And we all did was get a tree.

During an appearance on Chelsea Lately, Philipps revealed that she once auditioned for Glee, a week after giving birth, and wasn't surprised when they rejected her for her size. On Twitter, she posts things like "90 percent of the time when I am burping my baby, I end up burping before she does." In interviews, she reveals that she auditions "for everything, for all the shit" and that she DVRs herself on Cougar Town . Philipps is always hilariously, refreshingly honest, and it's just one more reason to love her.