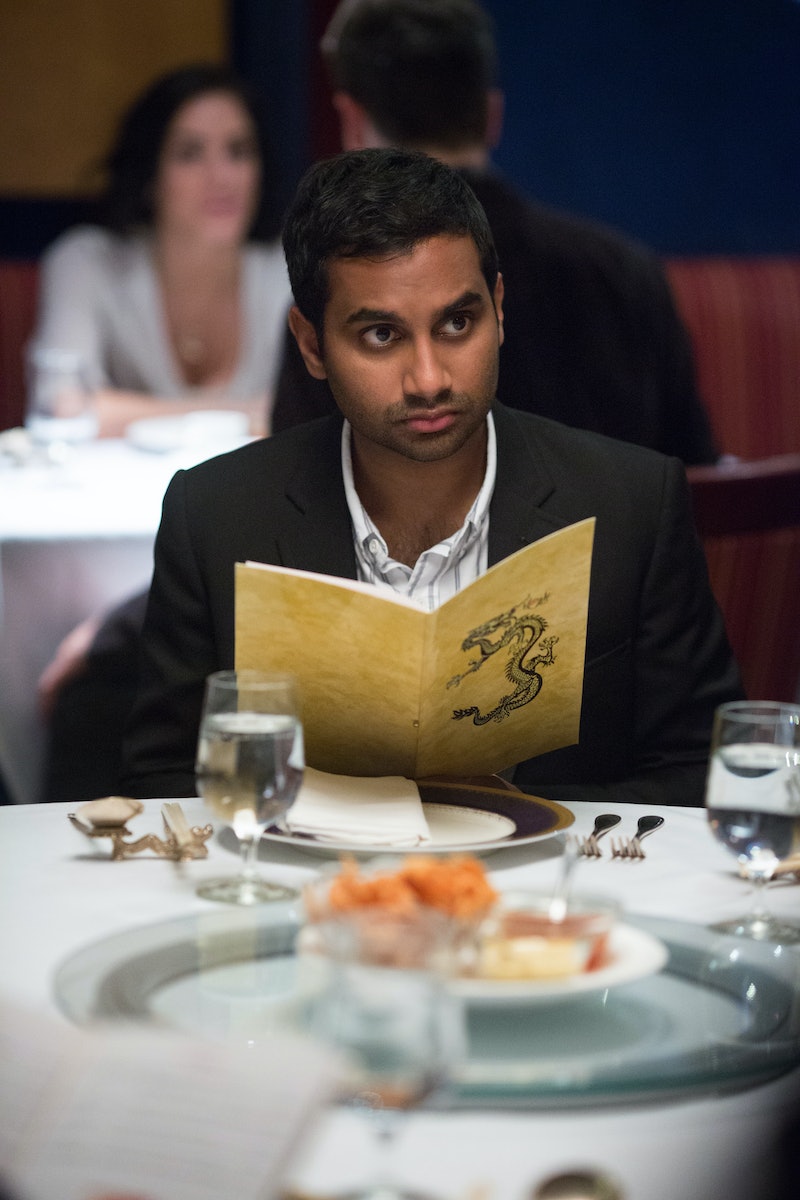 I know I'm not the only one who's excited to have comedian Aziz Ansari back on my TV screen. The Parks and Rec alum stars, writes, and directs a new Netflix comedy, which drops 10 episodes on Nov. 6. In Master of None , Ansari's real parents play his character Dev's parents and, if the comedian's best quotes about his parents are any indication, Shoukath and Fatima Ansari could be the breakout stars of this new show.

But, according to People, it wasn't that easy to get the Ansaris — who work in the medical field in North Carolina — to agree to act in Master of None . "[Executive producer Mike Schur] pulled me aside one day when we were shooting and said, 'Hey, we have this thing for your parents. Do you think your dad and mom would want to do it?'" Ansari said. "And my mom was just, like, 'No. I would never do it.' And my dad was, like, 'I'm in.'" It seems Ansari's mom eventually changed her mind and agreed to give acting a shot, while his dad is likely thrilled to already be getting rave reviews. Variety's review of the show says the doctor "steals more than one scene out from under his son," and The A.V. Club calls his performance "quite delightful."

But what else has Aziz said about his parents? Check out the quotes below before you watch Shoukath and Fatima steal scenes on Master of None.

"Whenever I would leave the room, my dad would pull Alan [Yang] aside and be, like, 'Hey, what about writing, like an old, Indian gastroenterologist into the world of Parks [And Recreation]."

Ansari said this to People , showing that his dad has always had an interest in performing. Perhaps comedy and acting both run in the family.

"Then he met my mom. He quickly deduced that she was the appropriate height (finally!), and they talked for about 30 minutes. They decided it would work. A week later, they were married."

Ansari wrote this in Time about the arranged marriage and first meeting of his parents.

"[My mom] said, 'It was one of those moments where I had to be brave and figure it out. You ever have moments like that, Aziz?'...And I was like, 'No! My life is super easy, because you did all the struggling.'"

In his Netflix standup special Aziz Ansari: Live At Madison Square Garden, Ansari recalled this conversation with his mother about her first days living in South Carolina.

"The Ansaris and the Carters at Yeezus last weekend. When my mom asked for this photo, Beyonce said 'It would be an honor.'"

Yup, you read that right. Ansari wrote this as the caption to an Instagram photo of his parents with Jay-Z and Beyonce. How awesome is this?

"My mom said I should be in touch more so I started texting her Drake GIFs all day."

I legit LOL'd at this Instagram caption, because 1. Drake GIFs from "Hotling Bling" are amazing and 2. My mom has the same reaction to Drake GIFs and emojis. Parents just don't understand.

"Parents in town. No matter what 'fun NY activities' we plan, we just end up napping. #GotNapsonNapsonNaps"

Ansari posted this on Facebook a few years ago and it's so true.

"Hugging my parents on stage at MSG. Happiest I've ever been."

How sweet is this? Ansari tweeted this photo from his stand-up show at Madison Square Garden in 2014. Now he'll get to share his bond with his parents with even more people when Master of None premieres on Nov. 6.

More like this
'Love Is Blind' Stars SK & Raven Break Up Amid Cheating Allegations
By Karen Fratti and Grace Wehniainen
In 'The White Lotus,' Leo Woodall Gets His Moment
By Gabrielle Bondi
The First Trailer For 'That '90s Show' Includes So Many Nods To The Original Series
By Jack Irvin, Alyssa Lapid and Grace Wehniainen
Elizabeth Debicki On Her Approach To The Most Debated Scene From 'The Crown'
By Grace Wehniainen
Get Even More From Bustle — Sign Up For The Newsletter