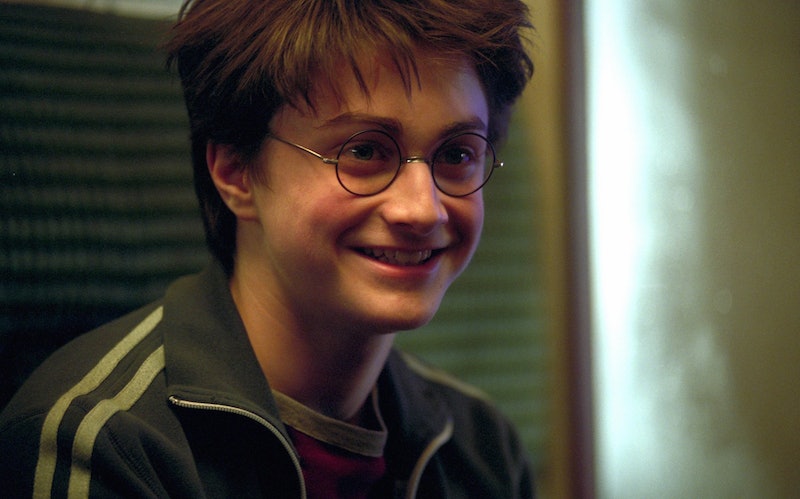 While we've had more than enough casting news to keep us occupied and happy in the time that we're spending waiting for Fantastic Beasts and Where to Find Them to finally hit theaters, casting news is no substitute for actual photos and images from the upcoming film. But, finally, we have our first look at Fantastic Beasts and Where to Find Them in the form of a title card, and it perfectly captures the magic of the Harry Potter series.

When you think back on the films, you probably don't reflect fondly on the title cards announcing which one of the eight movies it is that you're watching, but, when you're waiting for absolutely anything from an upcoming film, the title card is a lot. And this one has enough amazing detail to give us a hint of the film to come, and to reassure anyone who might be wary about more Harry Potter media that this is still the same old Harry Potter world — even if the film takes place largely in America.

The title card features the words "From J.K. Rowling's Wizarding World" before the title of the film, but the best part is the fact that the letters making up the title are styled to look like knives and monsters. The letters are in silver, looking not unlike the blade of a knife, and contain jagged edges that look like fans. In fact, the S in beasts looks like a big old snake, which already has me hoping that Newt Scamander has to face down a basilisk at some point. We obviously didn't get enough of those in Harry Potter and the Chamber of Secrets, OK?

It's an amazing way of marking this movie as part of the Harry Potter world — in Harry's own movies, his title cards featured the P in his name stylized like his lightning bolt scar, not unlike the snake-shaped S here — while also standing apart as its own thing. Excuse me while I stare at this title card like it holds all the secrets to the movie's plot. No one disturb me until the movie is finally in theaters, and I can watch all the amazing footage that will come before and after this spooky-cool opening.