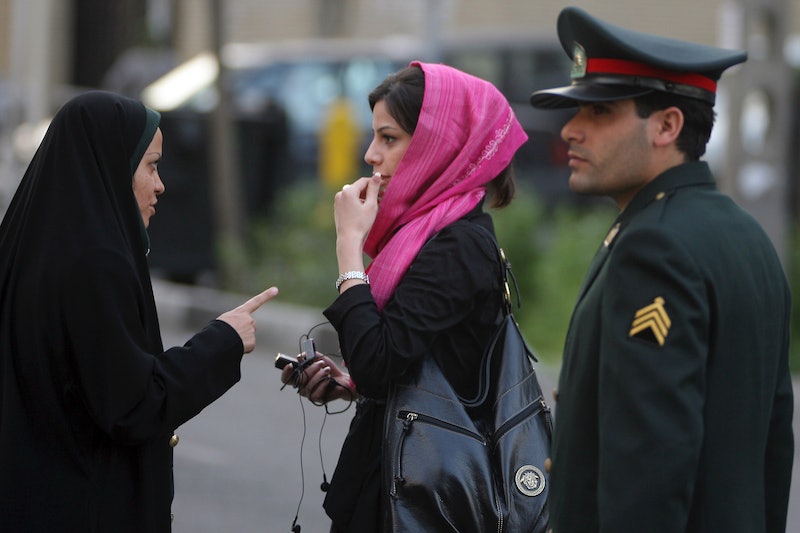 The Western world has a tendency to view the Middle East like a blob, grouping together the values of the entire region instead of looking at each country's individual perspectives — even down to how people's clothing. But the views of each country differ — sometimes drastically — when it comes to how women should dress in Muslim countries, according to the Pew Research Center. The majority of countries, however, seem to agree on this point: women should be frocked in a hijab to cover their hair, but showing one's face in public is perfectly fine.

Pew cites a study from the University of Michigan's Institute for Social Research, which surveyed people in Tunisia, Egypt, Iraq, Lebanon, Pakistan, Saudi Arabia, and Turkey. Researchers gave participants six different cards of women and asked them to identify which they thought was most proper in public. The first woman is covered in a full burqa; the second has a niqab that only allows for an eye slot; the third depicts a heavily veiled woman; the fourth shows a woman wearing a white hijab covering her whole head; the fifth also shows a hijab but with a tuft of hair poking through; and the sixth features an uncovered woman.

An average of 44 percent of respondents said they think it is most appropriate for women to wear the white hijab that only shows their faces. But in Saudi Arabia, 63 percent voted the eye-slit niqab as best for women. Turkey and Lebanon were the only countries with a sizable response in favor of the bare-headed woman.

The survey does not indicate the percentages of male and female respondents.

When asked if women should be able to choose their own clothing, a surprising 47 percent in Saudi Arabia agreed. Fifty-six percent of Tunisians answered in the affirmative, compared to only 14 percent of Egyptians.

The survey also inquired people in the seven countries about marriage: Only seven percent of respondents in Pakistan thought love was the most important basis for marriage, while 69 percent of those in Lebanon cited love as a vital factor.

More like this
How To See The Lunar Eclipse On May 15-16, 2022
By Kaitlyn Wylde
Starbucks' Summer Menu Includes A New Chocolate Cream Cold Brew
By Emma Garza
Kourtney Kardashian Got Married In A Heart-Stamped Mini Dress
By Allie Fasanella
Rebekah Vardy & Coleen Rooney’s Trial Has Officially Begun
By Bustle UK
Get Even More From Bustle — Sign Up For The Newsletter