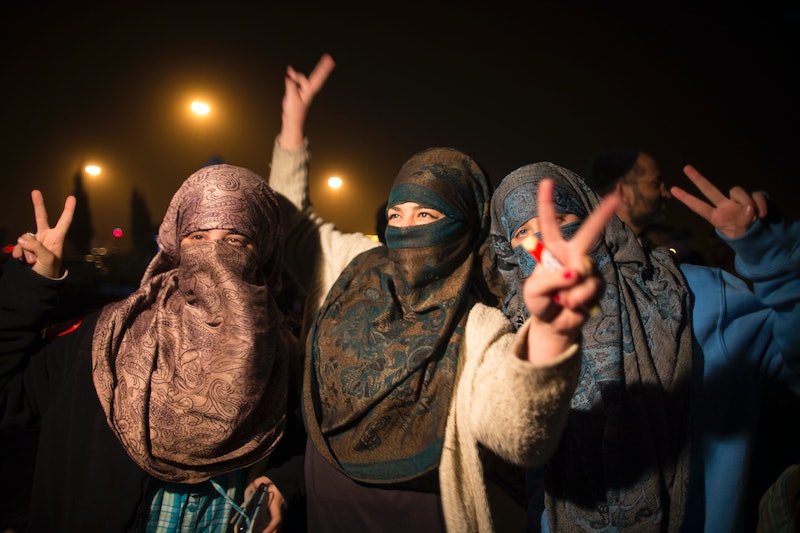 As an Arab woman, I tend to feel antagonized when Westerners lament the plight of the "Arab woman." Just look at Texas, I want to say. It's not all peaches and cream here, either. Reading the headlines can often become an exercise in pointing out still-rampant colonialist attitudes, and don't even get me started on burka laws. That being said, a recent survey has revealed what many of us in the Middle East suspect, see, or have dealt with personally: that much of the Arab world is a very difficult place to be a woman. According to the Thompson Reuters survey, Egypt — a country that, it was hoped, would become more liberal after the Arab Spring — is the worst country for Arab women.

The figures paint a depressing picture. According to the online survey conducted by the Thomson Reuters Foundation — which included answers from experts from U.N. Women, UNICEF and the World Bank — 99.3 percent of women and girls are subjected to sexual harassment in Egypt. Female genital mutilation is abhorrently common: 27.2 million Egyptian females — 91 percent — are subjected to genital cutting. Since the Arab Spring, female representation in parliament has fallen from 12 percent — an already low number — to a measly two percent. In general, the Middle East has closed only 59 percent of its gender gap.

This is all in spite of the fact that female activists were integral to the Egyptian revolution. Contributing to Egypt's position as the worst of all 22 Arab states was a sharp increase in female trafficking.

"There are whole villages on the outskirts of Cairo and elsewhere where the bulk of economic activity is based on trafficking in women and forced marriages," said Zahra Radwan of US-based rights group Global Fund for Women.

The figures are bad within Palestine as well, which ranked 15th on the list. According to 2011 survey, nearly 90 percent of married women in the West Bank say they have been sexually assaulted

by their husbands, with a horrifying 78.6 percent saying they have been physically abused by them as well. In the first nine months of 2013, 25 honor killings were recorded in the West Bank. And that's all excluding the political difficulties faced by Palestinian women — the same Thomson Reuters Foundation study suggests that "Israeli restrictions on movement have severe consequences for Palestinian women," including the 17 percent employment rate despite a literacy rate of 93 percent.So are the survey's results a shock for those who live in the Arab world? Unfortunately, no."It's not surprising that the Middle East is the worst region to live for women; the level of systemic sexual harassment faced by women daily is unacceptable but sadly the vast majority of women will attest to being subjected to it," Palestinian-Belgian journalist Soraya Bauwens, who has spent considerable time in Egypt, told Bustle. "Arab governments must move to ensure women's rights are upheld rather than turn a blind eye."

"We removed the Mubarak from our presidential palace but we still have to remove the Mubarak who lives in our minds and in our bedrooms," Egyptian columnist Mona Eltahawy said. "As the miserable poll results show, we women need a double revolution, one against the various dictators who've ruined our countries and the other against a toxic mix of culture and religion that ruin our lives as women."

In spite of this, there are those who manage to find positives in the rampant patriarchy of the Middle East.

"Maybe other women don't feel like me, but I feel like here [in the Arab world] it's an advantage to be a woman because people help you. I used to go to Irbid [a city in Jordan] to visit a friend a lot and I always got the best seat because I'm a woman, and a woman shouldn't be squashed in the back with the men."

The top ranked county in the Arab world was the island nation of Comoros, where 35 percent of adult women are employed and 20 per cent of ministerial positions are held by females. Second on the list was Oman, then came Kuwait, Jordan and Qatar. Saudi Arabia, where women have recently been making headlines by taking the wheel in protest of the country's ban on women driving, came third on the list.

As an Arab woman, these figures aren't a shock to me. I know that when I go home to the Middle East, I will likely have to adjust the way I dress, I will deal with vulgarities thrown at me by men who will assume — because I'm pale, and I'm blonde — that I don't understand the language. And I can only imagine the difficulties faced by women who live in Egypt, in Saudi Arabia, in Yemen.

But this isn't an "Arab" problem: this is a socio-economic problem, it's a political problem. It's a problem that arises when a society is unstable, because people take advantage of the vulnerable in situations of instability. It's a problem that women face in the military, and on U.S. college campuses. We, as women, are often victims, yes. But we shouldn't let ourselves be victimized. The "Arab woman" doesn't let herself be victimized.

More like this
How To Fight For Reproductive Rights, Based On How Much Time You Have
By Courtney Young
Juneteenth Is Now A Federal Holiday — Here's What That Means
By Lani Seelinger and Syeda Khaula Saad
The Families Of Grenfell Tower Are Still Waiting For Justice, Five Years On
By Bustle UK
Windrush Victims Are Still Waiting For Compensation
By Sam Ramsden
Get Even More From Bustle — Sign Up For The Newsletter