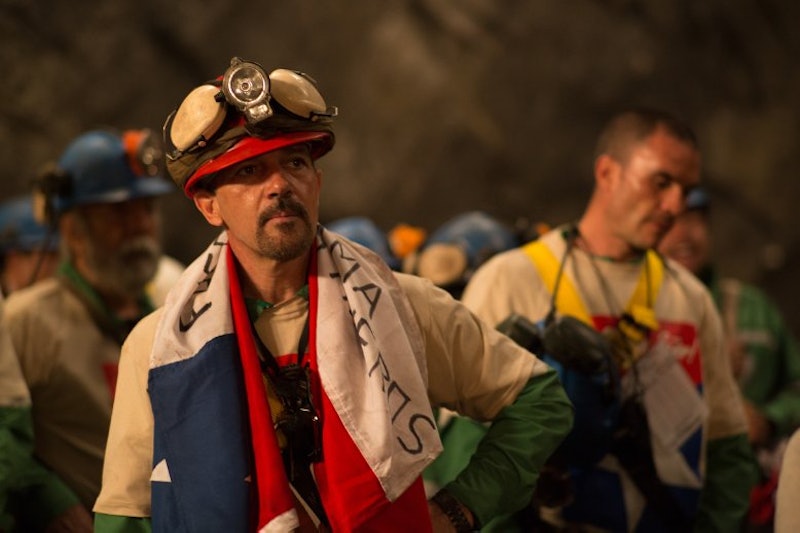 Five years ago, a mine collapsed just outside Copiapo, Chile, trapping 33 men in its dark underbelly. They remained there for just over two months, families and friends having all but abandoned hope, before they were rescued in October 2010. Every single miner survived the accident. The story has all the trappings of dramatic structure — exposition, complication, climax, resolution — so it's no surprise it's being adapted into a new film with Antonio Banderas and Juliette Binoche, entitled The 33. As for what the Chilean miners think of The 33 , well, that's a bit more complicated.

Five years later, it appears their trials aren't over yet. Nine miners have sued their lawyers, Remberto Rodrigo Valdés and Fernando Garcia, for what they perceive to be an unfair deal on the Hollywood adaptation, according to The Guardian. One of the miners, a man named Luis Urzúa, claimed to courthouse reporters that the compensation for each of the deals was not quite the sum the lawyers had led them to believe. Their lawyers brokered the various book, television, and film deals that arose in the wake of the incredible rescue, and the miners have now claimed, according to the BBC, that they were "badly advised" and "conned... into signing away their rights." Bustle reached out to Valdés and Garcia for comment, but hasn't heard back at this time.

This lawsuit is not a claim against the film itself, but rather their compensation for its use of their stories. The movie actually appears to be a quite accurate and collaborative depiction of those two months in 2010. Director Patricia Riggen told the Indy Star , "I flew to Chile, met with the miners, their wives, their children, with the government, with the rescuers, with the engineers and just collected all the experiences and the emotions that they went through." The result is "90 percent" faithful to the miners' lived experiences, Riggen said.

Yet the suit still has the potential to cast a shadow over the film. During their entrapment, and in its immediate aftermath, these 33 miners captivated the media's attention. But, as it invariably does, this attention eventually wavered, leaving the miners to return to their lives still suffering from the aftershock of the accident. CNN reported earlier this year that many of the miners now subsist on government pensions, unable to return to the mines for mental health reasons, yet making less money than they had underground. The New York Times wrote in 2011 that the numerous public appearances thrust upon the miners proved destabilizing for the already traumatized men; accustomed to private lives, they were reportedly unprepared for the trappings of accidental fame. At least one, Edison Peña, revealed that he turned to drugs; others reportedly suffer from post-traumatic stress disorder.

These outcomes are not tangential to the lawsuit some of the miners have brought; they're now speaking out against their perceived exploitation at the hands of their lawyers. "They feel like they have been treated with a lack of respect," writer Hector Tobar, whose account of the 33 miners entitled Deep Down Dark was the basis for the film adaptation, told Reuters. "That people sort of see them as these ordinary guys who accidentally got buried underground and hoped to get rich and famous off of it." And their hope with the movie, then, was that it might subvert some of those misconceptions. The miners did get famous, briefly, but certainly not rich.

The BBC also reported that the lawsuit has divided the miners — only nine have filed suit, though in hopes that the remaining 24 will eventually be "convinced of the validity of the plaintiffs' claim." They created a joint company intending that this would allow them to better manage their profits from the movie, but not all of the miners have entered the fray.

According to The Guardian, several of the miners acted as consultants on the film, which premiered earlier this year in Chile and will arrive in the United States on Nov. 13. The Guardian's report did not indicate whether they were among the men who had filed claims against the group's legal representatives. Regardless, it's clear that this is a controversial story, and hopefully, the movie will give the miners' tale the accurate and respectful treatment it deserves.