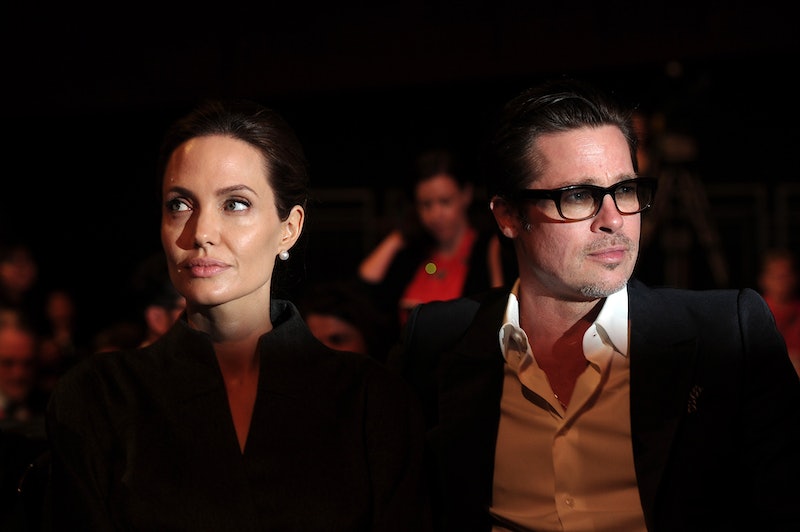 Hey, wanna hear a sentence that will simultaneously shock you and be completely and depressingly unsurprising? Angelina Jolie Pitt is the first female director Brad Pitt has ever worked with. Nooooo! Come on, dude. According to what a little bird named IMDb told me, Pitt's first credit is all the way back in 1964, with his work beginning in earnest in 1987, meaning he's worked steadily in Hollywood for almost three full decades without ever crossing paths with anyone sans a Y chromosome in the director's chair. That is truly incredible, and, to some extent, predictable. Since the group of women directors is so small, and the group of those who have joined it and achieved success even smaller, many have spoken out about the sexist odds in Hollywood they had to overcome to get there.

And nowhere is that more evident than the fact that one of our most A-List actors, Brad Pitt, has never even worked with a member of that group until she was his own wife. How? Pitt has starred in everything from critically-acclaimed blockbusters like World War Z, animated features like Megamind, star-studded pieces like the Oceans franchise, gritty cult classics like Fight Club, action-romances like Mr. And Mrs. Smith, and a whole mess of other projects. And yet, at no point during that time, or within that huge group of varied projects, did he encounter a female director. How. Can. That Be. Well, it can be because, according to a recent study, women account for only 1.9 percent of directors over the top 100 movies for any given year. That'll do it!

But I can't blame this all on the dearth of female directors; at some point, Brad Pitt does bear some responsibility to look at his career and be like, "Really? In nearly 30 years in the business, I didn't once stumble across a female director? That sucks." It's honestly mind-boggling to me that Angelina Jolie Pitt, his wife, had to be the one to end that all-male director's streak with By The Sea in 2015. It's beyond me. Luckily, it isn't beyond Jolie Pitt herself to discuss, as she's broken the silence that she's maintained in the past about how it feels to be a member of the minority group that is female directors in an interview with The New York Times:

Yup. Word. And, even if it's not the way I would handle the situation myself, if I were in Jolie Pitt's place, I have to respect her choice to deal with the inequality in the film industry by trying to take gender out of the conversation and make it just about skill level. I personally don't quite feel like we're at a point where that is an effective method — although I wish we were! — but I do appreciate Jolie Pitt opening up about what's going through her brain.

Sexism is part of every industry and must be addressed. But I try not to focus on the negative but the positive side of what we can bring. I want to support other women because of the opportunities I’ve had — and I’ve had a lot of opportunities. What I try as a female director is to do the best job I can and in the meantime bring attention to as many other female directors and writers as I can.