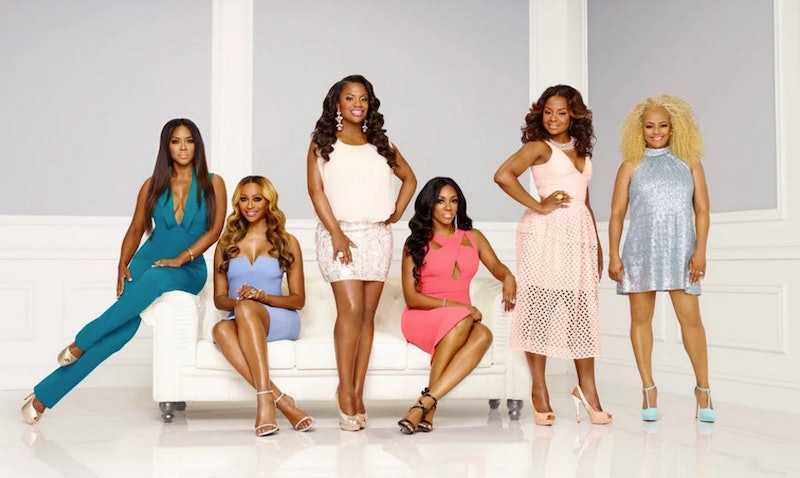 On Sunday, Nov. 8, the Real Housewives of Atlanta return for Season 8 on Bravo. With NeNe Leakes’ exit, and the addition of former Facts of Life star Kim Fields, this series shakeup has fans excited to tune in all over again. While a juicy trailer for Season 8 has been released and we got a sneak peek at this year's signature taglines, the anticipation of seeing all those mansions, cocktail-throwing, and lavish lifestyles is almost too much to handle. It also has me wondering, what is the net worth of the Real Housewives of Atlanta ? After all, it must cost a lot to maintain those mansions, refill those cocktails, and live such a luxe life.

From formidable fashions, to expensive nights in the club, to impressive real estate, to fancy cocktails (both thrown and imbibed), the RHOA ladies bring drama and fun to our screens, but at what cost? When considering the luxury and escapades presented on the reality series, it's important to factor in the net worth of the stars. Though these number have not been confirmed by the Housewives themselves, below are the reported, estimated net worths of each Real Housewives of Atlanta Season 8 cast member, as well as NeNe, because she'll forever be a Housewife.

According to Heavy.com, the Real Housewives and Celebrity Apprentice star weighs in at about $1.5 million.

As an entertainment lawyer and reality star, celebritynetworth.com lists Parks’ annual salary at $300,000 with an overall net worth of $2 million. The site also notes that Parks was a legal analyst for Fox News and NBC, and had some big name clients like Michael Jackson, Bobby Brown, and Ludacris, surely adding to her earnings.

Celebritynetworth.com lists singer, songwriter, record producer, and RHOA star Kandi Burruss’ net worth at $35 million. The site also lists the Grammy-winning songwriter as the woman behind classic songs like TLC’s "No Scrubs," along with Destiny's Child hits that include "Bug a Boo," "Bills, Bills, Bills," and "The Writings on the Wall."

The model and reality star makes $300,000 per season and has an overall net worth of $500,000, according to celebritynetworth.com.

Celebritynetworth.com estimates the net worth of the RHOA star and ex-wife of former NFL player Kordell Stewart as $500,000.

The former child star, best known as Tootie on The Facts of Life, has an estimated net worth of $8 million, according to celebritynetworth.com.

Though NeNe is no longer a RHOA regular, it felt wrong not to include her in a cast round-up. The reality star, actress, and entrepreneur’s salary per season, according to celebritynetworth.com, was $1 million. Now, her overall net worth is reportedly $12 million. Well, those numbers certainly explain how the Real Housewives of Atlanta have maintained those entertaining, luxurious lives for eight seasons.