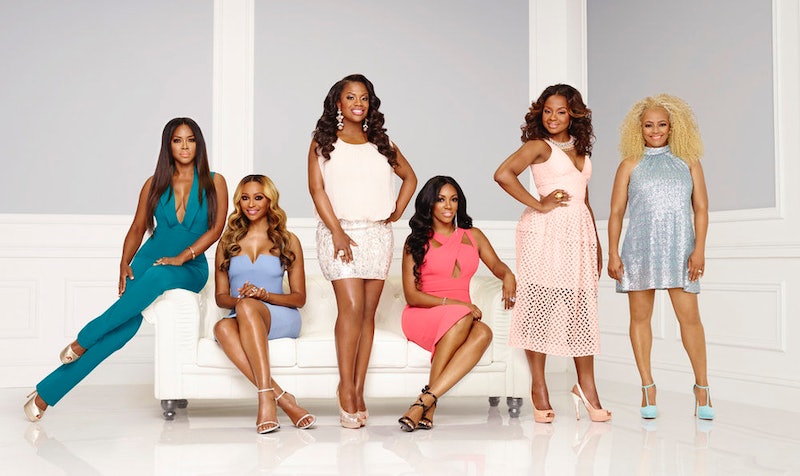 Now that Real Housewives of Orange County Season 10 is officially wrapped, it's time for The Real Housewives of Atlanta Season 8, which premieres Sunday, Nov. 8. With every new season comes fresh faces, more drama, and, of course, brand new taglines. Thanks to BuzzFeed, fans now have a first look at the new RHOA taglines for the upcoming season. If you thought the Season 8 trailer was exciting, just wait until you read their new signature phrases.

As you can see below, each Housewife has come up with a catchy, creative, and fitting tagline for themselves and the season. Each one has its own personality and is even telling of what's to come from new episodes. Basically, expect a lot of drama (duh), Kenya Moore to twirl (of course), Phaedra Parks to keep the faith, Kandi Burruss to continue working hard, Cynthia Bailey to try to stay relevant, Porsha Williams to speak the truth, and newest Housewife Kim Fields to school everyone about the facts of life.

It sounds like the typical season, but without NeNe Leakes as a regular and Kim Fields entering the Bravo reality game, things are bound to get shaken up and hopefully provide even more entertainment. With that said, let's analyze each tagline and see what RHOA Season 8 has in store.

"Don't come for me, unless I twirl for you." —Kenya Moore

Well, it looks like Kenya will continue to twirl this season. What else is new? Also, in typical Kenya fashion, she probably won't be putting up with anyone's drama, lies, and negativity, because she will always stay true to who she is.

"I'm a hit maker and this year I will reveal the best one." —Kandi Burruss

It seems like Kandi is going to keep on being creative and doing what she loves most. Plus, I can't help but think that the "hit maker" she's talking about is her impeding bundle of joy with her husband Todd Tucker.

Based on the trailer, it looks like this season is going to be extra tough for Cynthia and her husband Peter Thomas. Whatever the case, nothing or no one can stop Cynthia in her tracks and she will most definitely keep on fighting the good fight.

"Only God can judge me and he seems quite impressed." —Phaedra Parks

With Apollo Nida in prison and Phaedra's plans to divorce, this season is going to be very different for the reality star/lawyer/funeral director. Despite all of the rumors, struggles, and headlines, it appears that Phaedra isn't worried, because she has her faith.

"I'm about to give you pure life, so stay outta my way." —Porsha Williams

These ladies better watch their backs and get ready for even more honesty from Porsha, because based on her tagline it seems like she isn't holding back this season. I mean, just look at the above gif, which is seemingly about her new co-star Kim Fields.

"Faith, family, and career — those are the facts of my life." —Kim Fields

I hope Kim Fields know what she's in for, because the RHOA's facts of life are very different than her hit show. Whatever the case, it looks like she is staying grounded amidst all of the drama.

Who else is now even more excited for the new season?