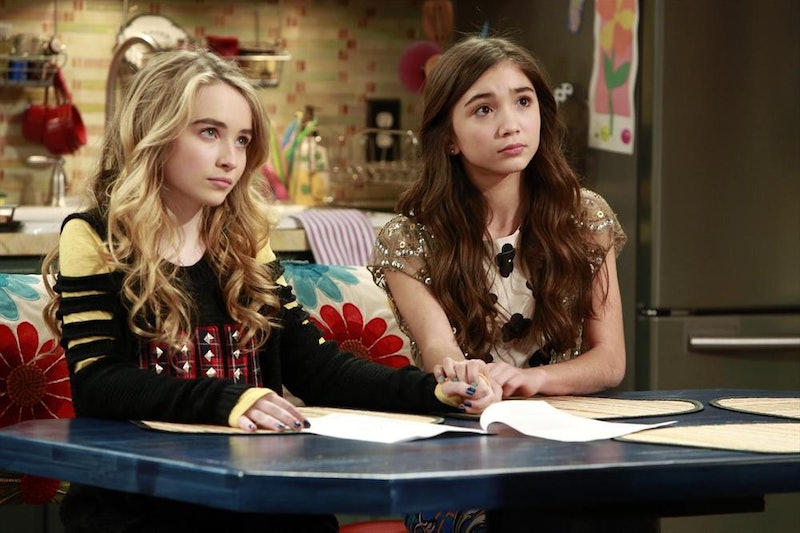 When we think of iconic television friendships, it's impossible not to rank Shawn and Cory from Boy Meets World in the top five. The ride-or-die best friends were there for each other at every possible step of their lives, helping each other get through breakups and bad hair days as well as cheering for one another through life's major milestones. Cory and Topanga may have achieved all the relationship goals one could ever hope for, but it was Cory and Shawn who taught viewers the importance of friendship. Now, it seems that Cory's own daughter on the BMW spin-off Girl Meets World is giving his best friendship a run for its money: Riley and Maya are the greatest OTP that Girl Meets World has to offer, and dare I say, they may also be the greatest friendship OTP on the planet. (And not just because Maya thinks so.)

It's rare to find a television show where the friendship between two girls is essentially the focal point, but perhaps that's because not every TV series knows how to capture a friendship quite as pure as Riley and Maya's. There's a ridiculously amount of love between these two, and no blonde Texan — no matter how cute a cowboy he makes — can come between them. Here's why Riley and Maya are the platonic OTP that I ship the hardest, even though they don't need anyone's support other than each other's.

1. They're Each Other's Favorites

No matter how much Riley thinks Maya is a bad influence, or how much Maya thinks that Riley just needs to live a little, they both know that there's no one else they would rather hang out with.

2. They Fight For Each Other

As Maya puts it, her and Riley are going to be friends for life — and sometimes that means dealing with some issues along the way. But after they're done tossing the ice cream, they're going to work out their problems — because that's how these BFFs are wired to work.

3. They Never Need To Knock

In fact, Maya doesn't even need a key to get into Riley's bedroom. That's how much trust these girls have for one another.

4. They Mastered The Feeny Call Together

Feeny helped Cory and Shawn through plenty of friendship issues, so it bodes well that Maya and Riley now how to call the world's greatest teacher for a few words of wisdom.

And not just because Maya would totally be down with being Riley's aunt.

Yes, even if it's a cafeteria uniform.

7. It's Them Against The World Until They Croak

8. They Will Always Step Back For Each Other

Boys come and go, sure, but both girls would rather let their BFF be happy by going after what they want, even if that person happens to be the guy that they also like. Umm, that's some seriously selfless stuff coming from middle schoolers.

9. They Challenge Each Other In The Best Way

Riley tells Maya to do her homework. Maya pushes Riley into cute boys. Either way, they're a little bit better for having known each other.

Shawn and Cory have some stiff competition with these two. Luckily, just like the BFFs that came before them, Maya and Riley are forever friends — and should be the real Girl Meets World OTP.