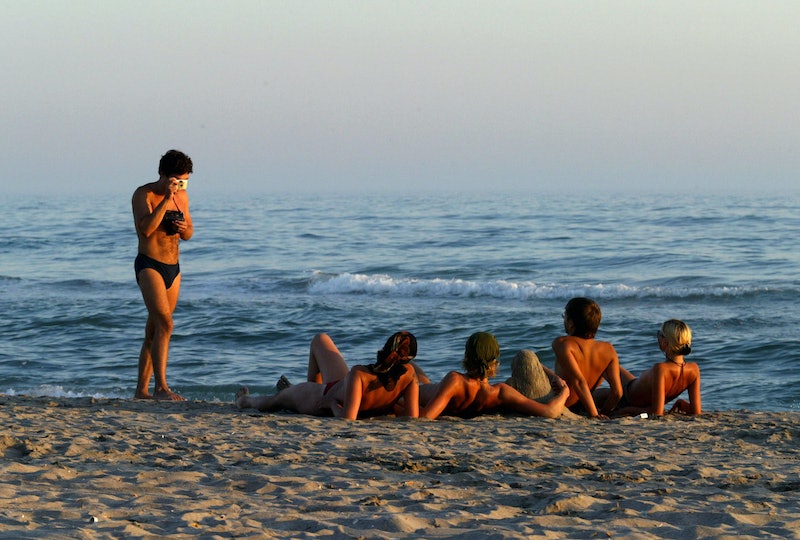 I guess I need to write about something called the bikini bridge now. Sigh. It turns out the thigh gap phenomenon is very 2013 and in this shiny new year we have a shiny new thinspiration trend to contend with. Apparently you've succeeded in achieving this totally arbitrary marker of physical attractiveness when your bikini bottom sits taut over your protruding hip bones and leaves a gap between your suit and your concave stomach. Because concave is what we are going for here, guys.

The Daily News spoke to FatGirlPhD.com fitness blogger Katie Lowe, who says that the term has been around since 2009, mostly on pro-anorexia forums. It is getting recognition this week thanks to what some are calling a "hoax" by the professional Internet trolls/sweethearts over at 4chan, who decided to create and distribute a series of images and tweets promoting the bikini bridge, accompanied by sayings like "If your girlfriend doesn't have a bikini bridge then why are you with her?"

I don't really get what 4chan is all about but I think their intentions are typically nefarious. Maybe they are making some sort of smart social commentary on the absurd and arbitrary nature of our beauty standards! Probably they are just being dicks. Either way, images like these are catnip for the thin-obsessed and no one is going to benefit from the propagation of another beauty bar against which to measure ourselves.

I have to admit that after learning about the bikini bridge, and then groaning and rolling my eyes around in my head for a while, I definitely wondered "Wait, do I have one? Do I have a bikini bridge? Usually the spot between my suit and my stomach is where I store burritos. Do I have a burrito bridge? Should I just start wearing one pieces? Should I have some internal organs removed?" It was a dark place inside my brain for a second. Maybe all of our New Year's resolutions should be to never think of our bodies in these terms again.

More like this
Is TikTok’s “Villain Era” Trend Just An Excuse For Bad Behaviour?
By Chanté Joseph
An Honest Review Of The TikTok-Famous WalkingPad
By Kaitlyn Wylde
TikTok's Favorite Bartender Thinks Mimosas & Bloody Marys Are Out For Brunch
By Alexis Morillo
How To Decorate Your Home Like A Coastal Grandmother
By Emma Garza
Get Even More From Bustle — Sign Up For The Newsletter