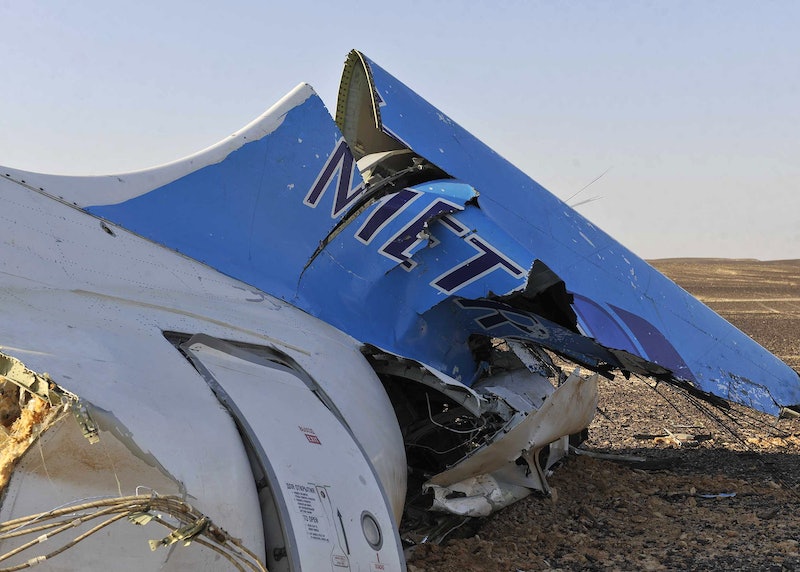 According to CNN, an anonymous U.S. official has made a rather alarming claim — that U.S. intelligence believes an ISIS-planted bomb brought down the Russian flight KGL-9268, which crashed just 23 minutes after taking off from Egypt for St. Petersburg last week. The cause of the crash has remained a mystery since, with ISIS claiming responsibility, prompting denials from Russian and Egyptian officials alike.

It’s always worth exercising a measure of caution regarding stories like these. Needless to say, ISIS blowing up a Russian passenger jet would be a catastrophic act of terrorism, carrying enormous geopolitical implications, and nobody’s been willing to go on the record just yet. According to CNN, their source was careful to stress that “there’s been no formal conclusion reached by the U.S. intelligence community,” which is also a good reason to reserve judgment. The source also reportedly claimed that "there is a definite feeling it was an explosive device planted in luggage or somewhere on the plane," and that "there had been additional activity in Sinai that had caught our attention" prior to the incident.

But in the event that the report is eventually borne out, the impact would undeniably be massive. All 224 people aboard KGL-9268 died in the crash, and confirmed ISIS involvement would surely intensify Russia’s deepening conflict within Syria. On Wednesday afternoon, CNN terrorism analyst Paul Cruickshank characterized it as “the most significant terrorist attack since 9/11.”

This is clearly a possibility that's being taken seriously by other nations as well. As The Guardian detailed, Britain has unilaterally delayed all UK-bound departures out of Sharm el-Sheikh, the Sinai resort that KGL-9268 departed from, and a spokesperson for Prime Minister David Cameron raised the specter of terrorism in explaining why:

While the investigation is still ongoing we cannot say categorically why the Russian jet crashed. But as more information has come to light we have become concerned that the plane may well have been brought down by an explosive device. In light of this and as a precautionary measure we have decided that flights due to leave Sharm for the UK this evening will be delayed. That will allow time for a team of UK aviation experts, currently travelling to Sharm, to make an assessment of the security arrangements in place at the airport and to identify whether any further action is required. We expect this assessment to be completed tonight. In terms of flights from the UK to Sharm, there are no more departures [scheduled] today.

It'll be important to see what response these latest rumors draw from Russia and Egypt, in particular. If it was indeed a terrorist incident in spite of the initial insistence otherwise from both governments, it could end up embroiling even more foreign military power within Syria, which is already racked with a terrorist uprising and a brutal, years-long civil war.