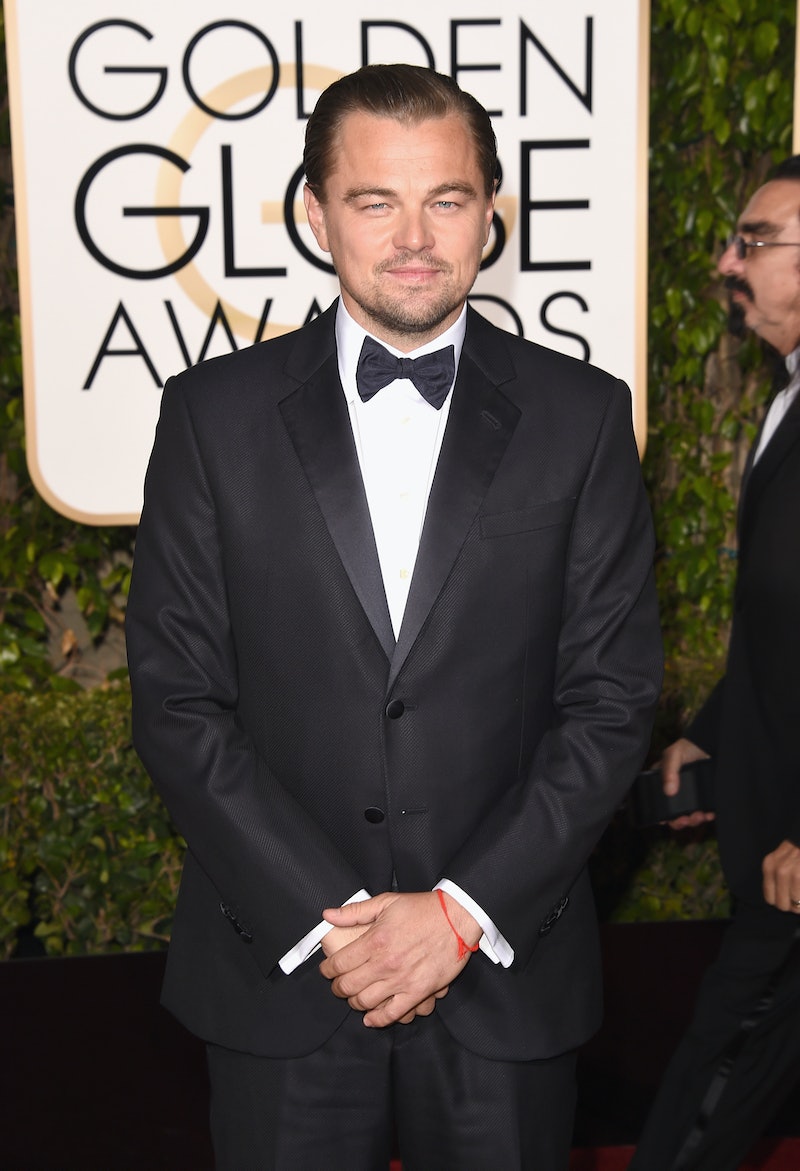 The Golden Globes have been referred to as the Drunk Oscars and while the people who are nominated for awards should probably take it easy on the booze, those of us watching at home can have as much as we want. Well, not so much that we're hungover Monday morning. Leonardo DiCaprio shared his rules of Golden Globe drinking on the red carpet of the National Board of Review award gala Tuesday night.

In an inteview with MTV, DiCaprio described the Golden Globes as "a much more calm atmosphere. Everyone has a drink at their table, we're eating, we're all socializing, we're not sitting in an auditorium." When asked about his recommended number of drinks DiCaprio responded, "You don't want to go above three. Two takes the edge off; three, you're going up onstage and doing something silly."

DiCaprio's drink rules sound like a good policy, but they're not relatable for those of us watching the Golden Globes from home this Sunday. The Golden Globes are three hours long and we need something to keep us going other than the promise of being up on all the water cooler talk the next day. So, with no further ado, here is the Leonardo DiCaprio Golden Globes Drinking Rules Drinking Game. (We'll come up with a better name later.)

-Take a drink whenever someone on stage appears to be on drink three or higher.

-Take a drink whenever someone does something "silly" on stage due to alcohol.

-Take two drinks whenever someone drinks on stage.

-Take a drink whenever a the camera gives a close-up of an attendee drinking.

-Take a drink whenever Leonardo DiCaprio is shown.

-Take two drinks whenever Leonardo DiCaprio is shown with a smug yet sexy look on his face.

-Don't take a drink whenever a person who has co-starred with Leonardo DiCaprio is shown, but think about how drunk you would be if you did.

-Take a drink whenever The Wolf of Wall Street is mentioned.

-Mix up a celebratory margarita when (if) Leonardo Dicaprio wins an award.

There you have it.

Ps. By "drink" I mean tiny, tiny sip, because otherwise you might both hate me and regret your choices very, very quickly.

More like this
Amanda Seyfried Reflects On 'Mean Girls' & "Gross" Remarks That Men Made After It
By Jake Viswanath
Laura Dern Said “Cultural Awareness” Made Her Rethink This 'Jurassic Park' Fact
By Grace Wehniainen
Colin Firth Revealed His Favourite Mr. Darcy (& No, It's Not Himself)
By Sophie McEvoy
Watch The Dramatic First Trailer For Netflix's Jennifer Lopez Documentary
By Alyssa Lapid
Get Even More From Bustle — Sign Up For The Newsletter