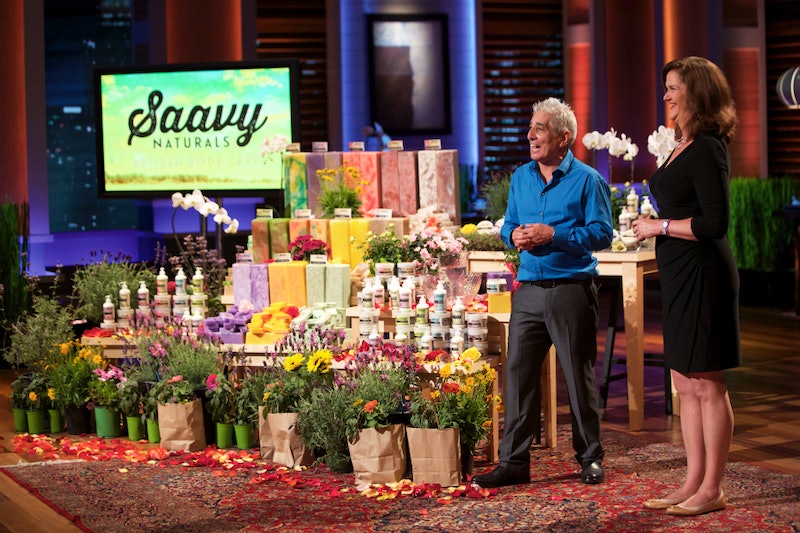 We've seen plenty of food products and beauty products come through those big, scary Shark Tank doors. However, one of the products appearing on Friday night's episode of Shark Tank is a little bit of both. OK, a lot of both. Perhaps Saavy Naturals should have been called Tasty Naturals instead.

That's because Saavy Naturals makes and sells body care products that you can actually eat if you so choose. You know when parents threaten to wash their children's mouths out with soap when they curse? Well, if they did that with Saavy Naturals' products, kids would be dropping F-bombs left and right because of how delish this company's soaps are.

It's hard for me to predict what the Sharks are going to think about Saavy Naturals' offerings. Saavy Naturals seems like it would fit right in on QVC under Lori Greiner's wing. Barbara Corcoran and Kevin O'Leary tend to invest in food companies, although Saavy Naturals really isn't one. And I can never really tell what Mark Cuban is going to do until he does it.

Saavy Naturals may just be crazy enough for all or none of the Sharks to want to test the waters of investing in. Well, it's certainly an interesting company to consider. Just continue reading, and you'll see why.

It's There For When You Get Hungry In The Shower

Because this totally happens. Well, hopefully you've never actually been so hungry that you've resorted to giving your bar of soap a nibble, but if you did that with Saavy Naturals' products, it might not taste half bad. That's because this company makes handcrafted, organic soaps, creams, and shampoos that you can actually eat. Some small, colorful hand soaps do look like candy. Now this just blurs the line between the two even more.

Saavy Naturals only uses 100 percent, food-grade ingredients in its products, which are also vegan and gluten free. You'll see ingredients like virgin coconut oil, organic jojoba oil, kosher vegetable glycerin, sweet almond oil, aloe vera, and vitamin E. The company's whole idea here is that what you put on your body is just as important as what you put in it. Hopefully using products from Saavy Naturals makes your skin look, smell, and feel as yummy as foods with these same ingredients.

You Can Scope Out This Soap Now

If you're digging the dual power of these body care products, you can lather yourself up sooner rather than later. Saavy Naturals products are available in a wide variety of places online, including the company's official web store and on Amazon. You can also find Saavy Naturals at some natural foods retailers mostly in California, such as Whole Foods, Lassens Natural Foods & Vitamins, and Clark's Nutrition. You might not want to completely confuse Saavy Naturals products for food, though. Growing boys and girls still need to eat the real stuff.

First stop, Shark Tank. Next stop, the world! Saavy Naturals held the grand opening of its flagship store Thursday, November 5 in Pacific City, Huntington Beach, California. The fact that the company is expanding is obviously a good thing, and it may even put snagging an investment from at least one Shark during Friday night's episode of Shark Tank into the realm of possibility. But I think the most important part about the opening of this new flagship store is the above photo of the owners of the company in hard hats. I mean, really. How adorable do they look?

So let's get into who the people behind Saavy Naturals are anyway. Saavy Naturals was co-founded by Hugo and Debra Saavedra, who had quite fittingly served as personal chefs and owned and operated restaurants in the past. This husband-and-wife team also previously owned and operated Hugo & Debra Naturals, a company that still seems very similar to Saavy Naturals, but "they are currently no longer associated in any way with any other company but Saavy Naturals," according to the FAQ page on the company's website. Hugo & Debra Naturals reportedly earned $7 million to $9 million in revenue when Hugo Saavedra was still the CEO of the company in 2012, according to an April 2013 Inc. article, so clearly this couple knows what it's doing in the natural body care arena.

They Love Animals As Much As You Do

The beauty industry hasn't always had the best reputation when it comes to its relationship with animals, but Saavy Naturals wants you to know that not only is the company cruelty free, but it is also a big supporter of the Humane Cosmetics Act introduced in Congress in June 2015. If passed, this bill would prohibit the testing of cosmetics on animals in the U.S. Surely, the Sharks would love that.