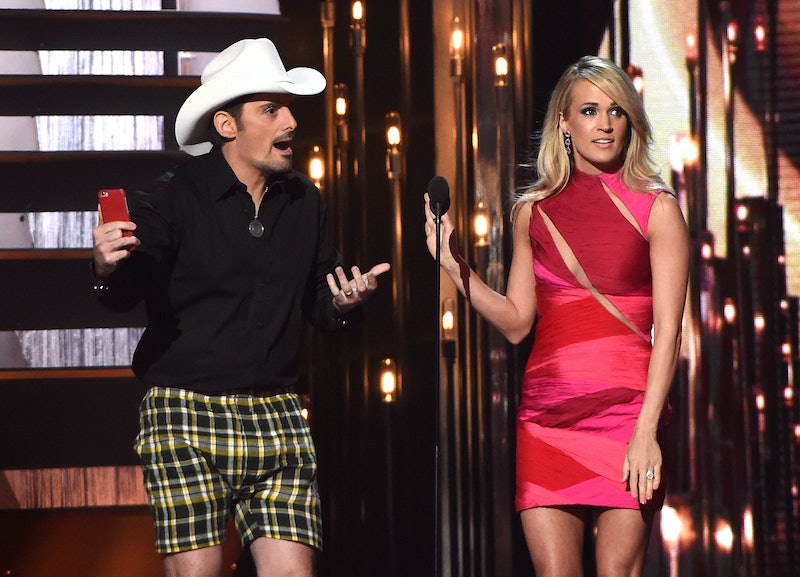 The Country Music Awards are country’s biggest night, and Brad Paisley and Carrie Underwood tend to do a hell of a job as the hosts of the show — a gig they’ve held onto for years. Their opening monologues are usually pretty hilarious, but unfortunately, this year, they did not live up to their own standards. Early in the night at the 2015 CMAs, Brad Paisley made a joke about Caitlyn Jenner that was extremely offensive and definitely should not have been included in the monologue.

The set-up is this — Underwood and Paisley usually sing a little ditty (this year it was sung to Patsy Cline’s “Crazy”) about the year’s events that happened since the last Country Music Awards occurred. It all began fairly normally, with jokes about Ashley Madison, man buns, McDonald’s all-day breakfast, and Donald Trump’s presidential run — but then it went bad fast, with the line, “Bruce Jenner’s a babe now.” Like, really, guys?

I thought by now it’s been thoroughly communicated that Caitlyn Jenner's name is just that, Caitlyn, and a person who has always identified as a woman. It’s offensive and problematic to say, “Bruce Jenner is a babe now.” By referring to her with the wrong name and implying that something about Caitlyn's gender has changed, the joke belittles the struggles — both personal and in the outside world — that transgender people go through every day. There is so much more to coming out as transgender that it’s overly simplistic and demeaning to refer to a public transition as “becoming a babe.”

Country music as a whole has a reputation for not being very inclusive — there are very few artists that are gay or people of color. Still, I had hope that Caitlyn wouldn’t have been the butt of a joke at the CMAs, especially since she has nothing to do with country music, and has spent so much time trying to educate others about the transgender community. On an awards show that’s usually a good time, that "joke" was a sour note.