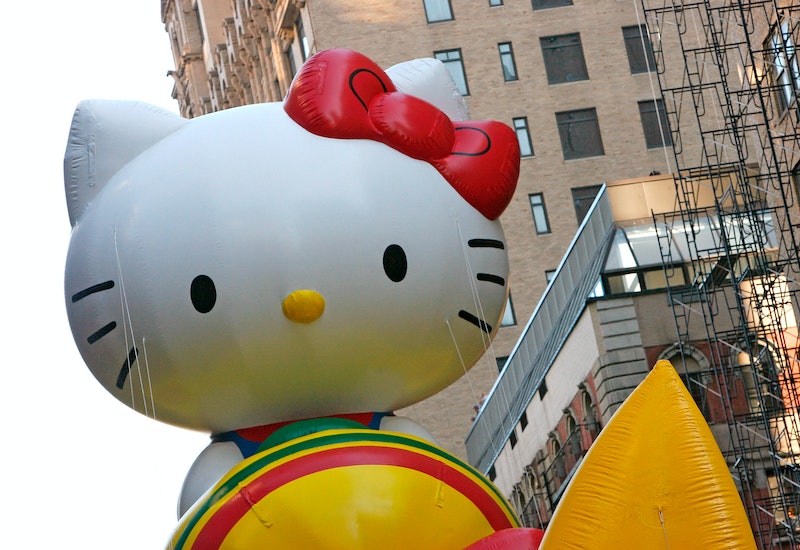 Hello Kitty, and a little girl named Virginia O'Hanlon, whose skepticism about Santa Claus spawned one of the most famous op-eds in history. Those are the only examples of female balloons in the 89th Annual Macy's Thanksgiving Day Parade. Just two. And, while I love Hello Kitty and am happy she'll be floating down the streets of New York City in her little plane this Thanksgiving, knowing that only two out of the 17 character balloons and 24 "novelty/ornament balloons, balloonicles, and trycaloons" are based on female characters is disappointing. Guys, the Macy's Thanksgiving Day Parade needs more female balloons.

It's especially disheartening being that this year's parade boasts four new character balloons, which include the Red Angry Bird, Ice Age's Scrat, and a dinosaur sponsored by Sinclair Oil. Ronald McDonald is even getting his fourth balloon this year, which got a prominent spot on the parade's female-less official poster. Since 1924 — when the parade first debuted — female characters have largely been forgotten. Sure, Mrs. Claus is there, but she's not the main attraction; it's her husband who gets to close out the parade while she gets to smile and wave as he gets all the glory.

Olive Oyl is widely reported to be the "first official female character" to earn a balloon, but historian and author of Macy's Thanksgiving Day Parade, Robert M. Grippo, told Bustle that in his research the first female character was really Mrs. Katzenjammer from the comic strip The Captain and the Kids. But, even still, if Macy's wants to say Olive Oyl was the first, she was introduced 55 years into the parade, and 25 years after Popeye earned his own balloon. And yet, after all that time she waited, Olive Oyl ended up having to share her balloon with Swee'Pea, after they added him to her hip in 1986, as Grippo pointed out in a photo on his Facebook page The Big Parade History Project, which looks to correct some of the misinformation that's been written about the parade's legacy.

On top of that, there have been numerous recreations of classic male characters over the years — Ronald McDonald, Mickey Mouse, Kermit the Frog, Garfield, Barney, Pikachu, Spider-Man, Sonic the Hedgehog and Snoopy, who alone has had seven different balloons. Hello Kitty is the only female character to receive an additional version of her balloon (the "Airplane" version in 2012). She is slated to get an even newer version dubbed "Top Hat Hello Kitty" in 2016.

Female representation certainly isn't a new complaint when it comes to the Macy's Thanksgiving Day Parade. In 2010, the group EVE (Equal Visibility Everywhere) launched a campaign to add more female balloons to the most well-known parade by creating an Amelia Earhart balloon that would be part of their "Great American Heroines" balloon line. Earhart has been up in the air, but hasn't gotten the chance to take the skies over New York on Thanksgiving. Oddly, 2010, the same year EVE launched its female balloon campaign, was the last year that the parade introduced a brand new female character balloon — three to be exact.

There is an easy solution to this though. Next year, Macy's needs to create a female balloon — four new female balloons would be nice, but one is a good start. Then do the same the year after that, and the year after that, and, well, you get where I'm going with this. It's not difficult to find a popular female character to replicate in balloon form. The Internet loves Tina Belcher, that strong, sensual teen from Bob's Burgers, so why not get her up there to represent a new crop of female cartoon characters? Joy from Inside Out would be another good recent choice. Minnie Mouse has never gotten her own balloon, believe it or not. Neither has Miss Piggy, who I'd love to see strutting her stuff down the street in whatever designer outfit she chooses.

These characters are just the tip of the iceberg when it comes to better representing female culture in the air, because female characters haven't gone out of style since 1927. With how many people tune in to the Macy's Thanksgiving Day Parade, especially how many of them are little girls, it would be nice to see more balloons that represent them.