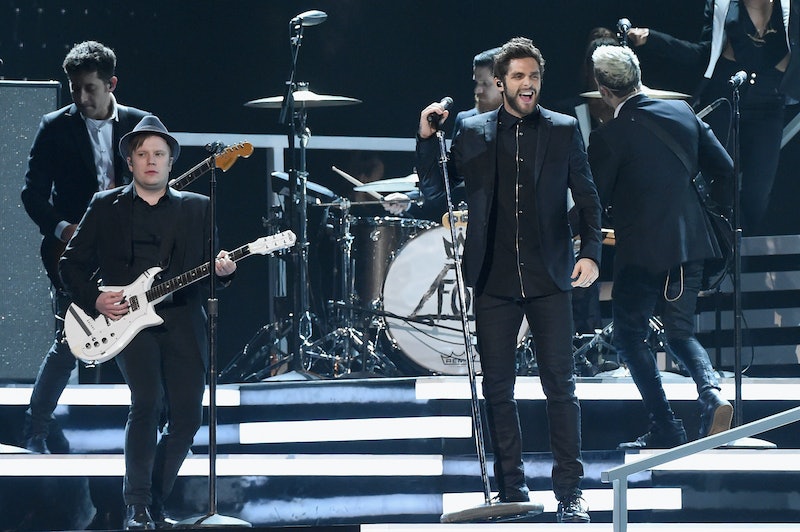 The Country Music Awards, much like the Grammy Awards and the American Music Awards, are really not so much about the trophies than the killer performances. Let’s face it—giving out awards is boring, while rocking out to your favorite artists is not. Fall Out Boy and Thomas Rhett performed at the CMAs together, and they totally made a case for combining two of my favorite genres—country and pop punk.

I know, I know—they don’t seem like they should go together. You know, like pickles and peanut butter. But when you try the unlikely combination, it actually turns out pretty good. This CMA performance opened out on a slick, modern set, all decked out in black and silver and featuring some blazered and high-ponytailed backup dancers. (Are these the first backup dancers at the CMAs? They were at least the only of the night.) Rhett quickly broke into his hit “Crash & Burn,” with Fall Out Boy singer Patrick Stump singing harmonies and choruses. Stump’s wailing cry (and I mean that in the best possible way) blended really nicely with Rhett’s huskier tones. Both singers seemed to be having a ton of fun on that stage, just singing a country song. I do have to admit—besides Patrick Stump, the other guys in Fall Out Boy didn’t even seem to notice they were on stage. I mean, look alive, gentlemen!

Then the groovy guitar riff of “Uma Thurman” started in and bam—those dancers sure came to life, mimicking the swinging swimming dance moves of the 1960s. Rhett may have not known what to do with himself here, but it was fun to watch him ham it up in a way that he probably doesn’t have to for his country music songs. Sometimes an unexpected pairing just works, and I wouldn’t be surprised if Rhett and Fall Out Boy team up again.