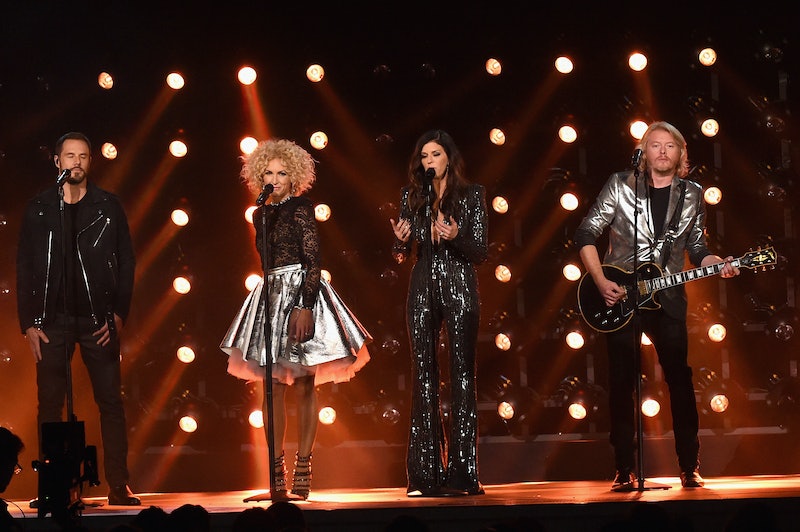 Little Big Town has had quite a year. I mean, they’ve had many successful years (the band’s been together for 17 total), but how inescapable was their single, “Girl Crush” this summer? And the band is certainly reaping the benefits of it now—Little Big Town won three CMA awards, including Single Of The Year and Song Of The Year for “Girl Crush” and Best Vocal Group. How amazing is that? Many artists don’t win one CMA award, let alone three in the same hour.

“Girl Crush” seems like the little single that could, not because it’s not a great song or that it came from a no-name band or had no promotion but because of the outright hostility that radio stations got for playing it. According to the Washington Post, the song—which is about being super jealous of another woman, mind you—was called out for “promoting the gay agenda,” and many radio stations were told to take it off the air lest listeners never tune in again. This controversy probably helped propel the single, as “Girl Crush” racked up plenty of sales on iTunes and in other digital markets. Even if people are talking about you for wrong reasons—the song is not at all about a lesbian relationship—they’re still talking about you, and Little Big Town totally reaped the benefits here. I think I have a girl crush on Little Big Town, to be honest.

So what’s next for the band, which, by the way, has been compromised of the same four members since its inception—Karen Fairchild, Kimberly Schlapman, Jimi Westbrook, and Phillip Sweet? According to their website, they’re touring through the fall on their “Pain Killer” tour. Then, they should take a little bit of a break—this foursome has definitely earned it.

More like this
Cruz Beckham Teased New Music With An Adorable Nod To Mom Victoria Beckham
By Stephanie Topacio Long
"Lavender Haze" Star Laith Ashley Breaks Down Filming With Taylor Swift
By Jake Viswanath
Twitter Wants To Dance With Anne Hathaway At Paris Fashion Week
By Alyssa Lapid
Hailee Kaleem Wright's Topsy-Turvy Path From MTV To Broadway
By Samantha Leach
Get Even More From Bustle — Sign Up For The Newsletter
From hair trends to relationship advice, our daily newsletter has everything you need to sound like a person who’s on TikTok, even if you aren’t.