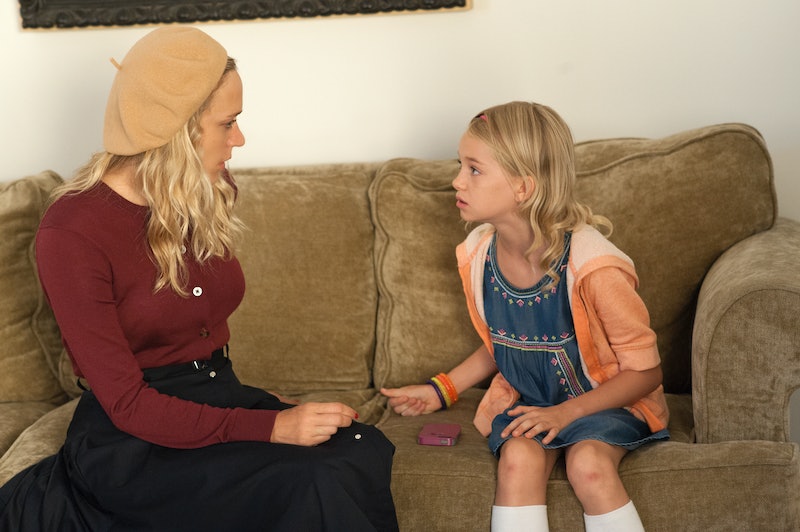 There are a lot of things that freak me out on American Horror Story: Hotel. Like mattresses, for example, which I'll never be able to look at the same way ever again. However, one of the more terrifying aspects of this show is the horrible display of parenting that's going on in regards to John and Alex Lowe's daughter, Scarlett. Throughout the entire episode of "Room Service," Scarlett was nowhere to be found, while her parents were seen either having sex with undead junkie ghosts or accidentally creating a vampire epidemic. (I'll let you guess which was which.) But where was Scarlett amid all of this AHS: Hotel excitement?

You'd think she would've been in school with the rest of the kids, but I guess she decided to take a personal day or something — an idea that maybe Alex should've considered before heading off to work moments after being infected with the vamp virus. In all honesty, though, I can't tell what's more disturbing — the fact that we don't currently know Scarlett's whereabouts or that her parents don't really seem to care. Sure, they have their own personal issues that they're grappling with right now, but still, this is their daughter that we're talking about. Can they really be so cavalier as to forget her altogether?

Heck, Alex doesn't even really like John all that much anymore, but she still mentioned him to The Countess for fear that he'll see her walking around all vamp-like in the hotel. So she's able to think of her soon-to-be ex-husband, but she can't take a moment and consider what's best for the other offspring? If I'm supposed to be any sort of sympathy for Alex in regards to her overwhelming love of Holden, it's getting completely overshadowed by her abandonment of Scarlett. She has done nothing wrong and doesn't deserve this kind of treatment. In fact, if it wasn't for her, Alex probably never would have reconnected with Holden.

Maybe Scarlett did the smart thing and bought one-way ticket out of town. After all, she's quickly turning into the smartest person on this show and if there's any justice in the world, then perhaps she'll be the last one left standing. So, Scarlett, wherever you are, just know I got your back, girl.