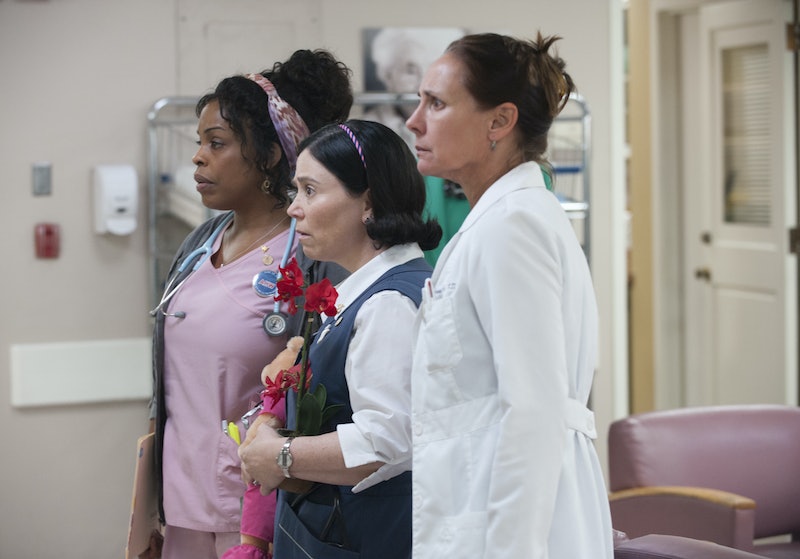 "What is Getting On?" That's a question you may hear if you're a fan of the show extolling its virtues to the general public. For a series that airs on a network as buzzworthy as HBO, this cringeworthy hospital dramedy flies surprisingly under the radar. Based on a British program of the same name, Getting On tracks the lives and careers of three women in an extended care unit: Dr. Jenna James (Laurie Metcalf), the ward's domineering director; head nurse Dawn Forchette (Alex Borstein), a hopeless romantic; and nurse Didi Ortley (Niecy Nash), often the only sane person around. If you haven't been privy to the misadventures of this comedic trio, now is the perfect time to scrub in: the third and final season premieres this Sunday evening. But first, a recap of Getting On Season 2 to get us all up to speed.

The show's freshman year dealt largely with Dr. James' self-important research into stool, Dawn's awkward flirtations with supervising nurse Patsy De La Serda, and Didi's struggle for respect and order amidst the chaos that is the Billy Barnes Extended Care Unit. Season 2 shifted the focus away from Jenna's research towards Billy Barnes' transition into becoming a hospice program — and the manifold complications that ensued. Here's where the three stooges of Mount Palms Memorial Hospital left off in last year's finale, "Doctor Death."

In the Season 2 finale, it was revealed that the hospice program started by Dr. James and corporate representative Suzi Sasso (Jayma Mays) was actually a "death mill" — they were intentionally over-admitting patients in order to receive kick-backs from the government. Suzi severed ties with Jenna, leaving the doctor and her nurses vulnerable to prison time and hefty fines. Dr. James urged Dawn and Didi to destroy all the hospice files, but the files were confiscated by the hospital's legal team before they could be fully disposed of.

After her on-again off-again relationship with her supervisor Patsy fell apart when Dawn suffered a hysterical pregnancy, Dawn rebounded quickly by striking up a flirtation with security guard Dennis Beardman... and promptly marrying him in the season finale. Although Dawn tried to host a subtle engagement party in the gift shop, Patsy found out and he and Dennis almost came to blows over her — which pleased Dawn to no end, naturally.

Although she received a 30-cents-per-hour raise in her new role as hospice-nurse liaison, Didi quickly learned that her promotion should have come with a raise of $10,000-$15,000 per year. Sick and tired of being undervalued, Didi cornered Dr. James and demanded her rightful paycheck — back wages and all. Sadly, the dissolution of the hospice program not only put the kibosh on that raise, but also put Didi's very livelihood at risk.

Jenna, Dawn, and Didi all ended Season 2 in a very precarious position, with Dr. James (jokingly?) offering to jump off the roof of the hospital with them in order to avoid prosecution. But the finale ended on a bittersweet note, with the three women working together to bring back a patient from the brink of death. Following the patient's DNR in letter if not in spirit, the trio massaged and sang and worked together to keep the elderly woman alive.

Will Season 3 end with our bumbling trio of heroes being carted off to prison? Or will Dr. Stickley find a way to sweep the hospice debacle under the rug in order to keep the reputation of Mount Palms Memorial Hospital intact? Tune into the premiere, "This Is About Vomit, People," this Sunday, Nov. 8, at 10 p.m. ET to find out.