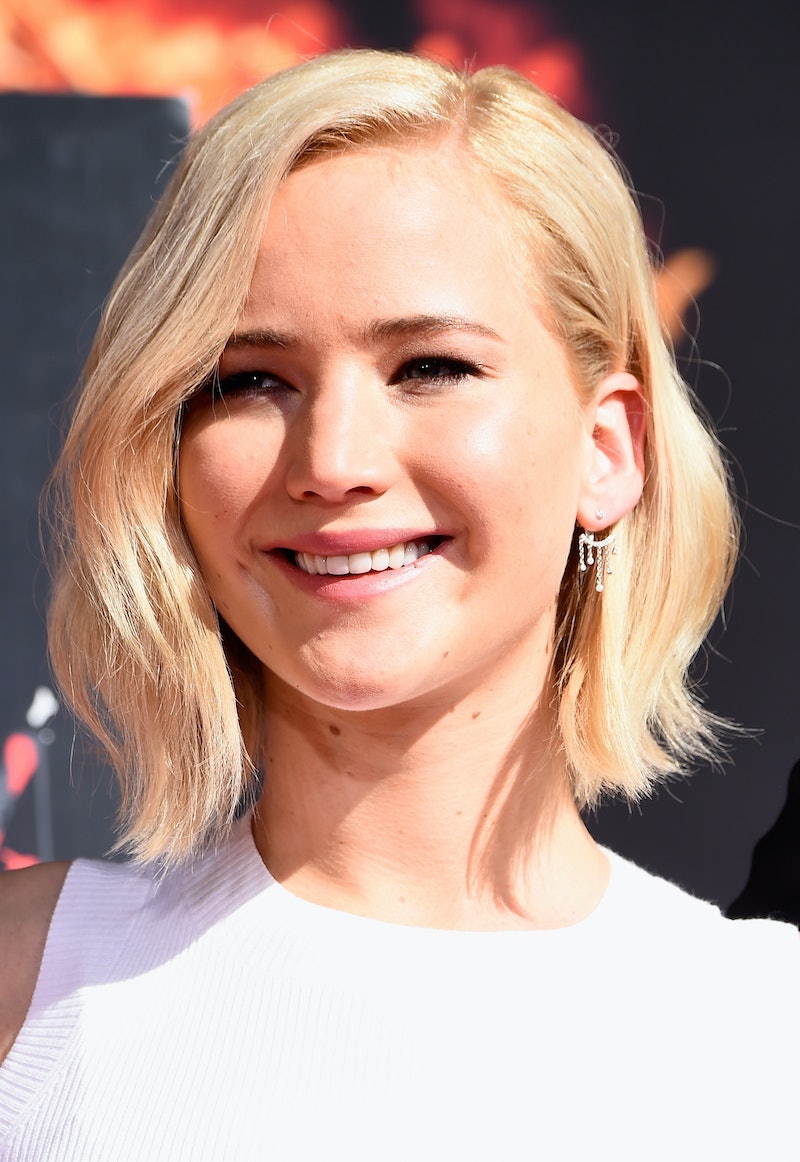 Frankly, I'm kind of annoyed that Jennifer Lawrence and Amy Schumer are playing with our emotions like this. By that I mean, how can they just announce that they're writing a movie together and then not only not tell us what it's about, but not even give a clue as to when they expect it to hit theaters? It just seems like torture. I mean, sure, we know that they'll be playing sisters, and Schumer did describe the project as "dirty," "funny," and "real," just last week, but what are we supposed to do with that? Thankfully, her writing partner has taken a bit more pity on us and Lawrence has offered more details on the movie (though not enough for my liking).

Talking to Entertainment Tonight, J. Law confirmed Schumer's descriptors ("Yep! It's all of those things.") and added a few more hints of her own, revealing that Schumer's character "has it very together." She works at the airport and has had a life-long ambition of becoming a flight attendant. Whether or not the movie will explore that dream and see her achieve it by the end, we'll never know. We do know that Lawrence's character is "a MESS," but that's about it. It's better than nothing though, right?

What's hilarious is that if Lawrence is meant to be the more neurotic/less put together of the sisters, just how bad can things be? After all, Schumer's character's goal of being a flight attendant (which, presumably, she's finding it very difficult to achieve, even at entry level) doesn't seem all that lofty, meaning that Lawrence's character must really be struggling. It's unclear whether or not the sisters will be close or in a constant feuding state, and either one will be great, but I'm so curious to see how this flight attendant plot — which Lawrence clearly felt was important enough to bring up as the first solid detail, unless she was just throwing out something random to stop us from being too nosy — plays out.

Lawrence has the uncanny ability to play these really neurotic characters with myriad issues with such charming relatability that you can't help but love her, even if she has no semblance of how to keep it together (and in fact, it's the inability to do so that often lets her charisma as an actor shine). In other words, the messier her role in this movie, the better.

Either way, one thing is sure: this is going to be an incredible movie that will not only be hilarious but will likely kill it at the box office. After all, Lawrence and Schumer are two of the biggest names in Hollywood, and having a female-written and led comedy doesn't happen often enough. I won't even say that I hope they'll be the next Amy Poehler and Tina Fey (comparisons which have already been made, obviously) because they're totally different people — and equally awesome. Now it just needs to be finished, filmed, and in the theater so I can go see it already.