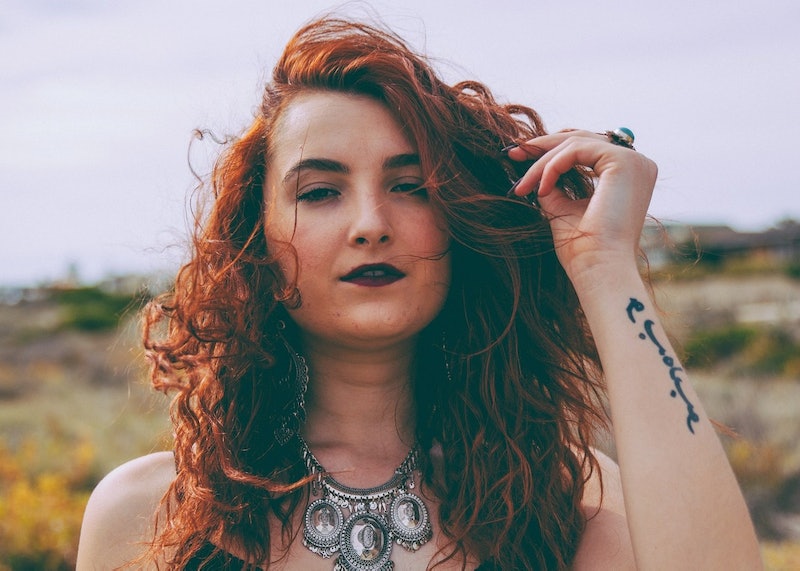 From my experience, a lot of people still like to discourage folks from getting inked when they're young, but there are plenty of solid reasons to get a tattoo before you turn 25. Certain naysayers might suggest you just get a nice temporary tat — one that will put something pretty on your skin and then wash away after your third shower. That should be enough of a fix, right?

The thing is, people usually get tattoos for personal reasons. Maybe they want to prove to themselves that they’re brave or different. Perhaps they want to remember a person they love. Maybe they just want to feel spontaneous. None of that can really be achieved with a stick-on tat.

IMO, you should bite the bullet and get inked before you’re 25 because there’s something special about your early 20s. Chances are you’ll never be quite as wild and full of curiosity again. Right now, you’re learning about yourself, picking up memories, meeting and losing people, and discovering all the crazy/awesome things the world has to offer you. While you’re full of so much life and excitement, you should ride that wave and capture it on something tangible. Like, say, your upper arm. Here are seven reasons why you should get a tattoo before you're 25 — so don’t second guess your need to live out loud.

1. You'll Be Able To Wear Your Memories For Longer

In your early 20s, life often has a way of being wild and free and full of bright light and colors. Responsibilities are often still at a relative low and possibilities are at a high. Granted, not all of us are quite so barefoot-in-the-grass, but the point is that your 20s can bring you some of the happiest, most untamed memories you'll create.

How cool would it be if you find yourself as a 45-year-old mom, looking in your bathroom mirror, seeing the tattooed mermaid on your side, and remembering what inspired you to get it two decades earlier? Those feelings and memories will come right back to you.

2. You Can Put Some Love On Your Skin

Not many people go the route of putting Big Bird on their upper thigh, unless it happened on one of those nights when Jäger is involved and bad decisions are made. Most people get inked out of love. Sure, some cynics might argue that "you can't know what love is when you're in your 20s," but that's simply not true.

You might not be ready for the type of love that deals with splitting mortgage payments and deciding what color to paint the bathroom, but you've likely experienced pure and simple love many times. One of my favorite tattoos I've ever seen was on a guy who had the Giving Tree on his upper arm. It was a love letter to his late mom, who used to read the story to him as a kid while they snuggled in bed. If you have love and need to express it, do it now — before you talk yourself out of it with practicalities.

Being in your early 20s is a scary thing. Many of us leave the safe routine of school behind, finding ourselves a semi-decent job and muddling our way through relationships. We begin to sort out who's important in life and who's just there as a background character. Sometimes a tattoo can be there to remind us that things aren't so bad.

I once met a girl on the bus who had "Just Breathe" tattooed on the inside of her wrist. If that helped center her every time she felt like her world was ready to fold, then wonderful. One of my closest friends inked an evil eye on the inside of her wrist to ward off bad energy from those who don't support her or want to see her fall flat on her face. And if that makes her feel stronger, amazing. Growing up is tough, but a permanent reminder that you can do this and you're hella strong can make it feel less intimidating.

4. You Can Show Your Appreciation For Beauty

This isn't true for everyone, of course, but once we get older, many of us put aside some things that are frivolous and start to get practical.

So get a tattoo while you still have the desire to do so. When you're 50 and worried about how much beef goes for at the grocery store, it'll remind you that there are more beautiful things in life waiting for your attention. Whether that's a piece of art on the sleeve of your arm or a poem that's reached in and touched something deep inside you, follow your whim and trap that beauty on your body.

5. You Can Capture Your Passions & Remind Yourself Not To Give Up

Another downside of growing up is that sometimes you get discouraged when it comes to those wild dreams you had when you were younger. Say in high school, you just knew you'd become the next big thing on Broadway. Maybe in college you had whole notebooks full of poetry that you were certain could touch people if only you found a way to get them into their hands.

IMO, only the people who work hard and can take large doses of rejection can make those big dreams happen, and if you have something permanent on your body reminding you of just how much said dreams mean to you, you might feel that much more determined.

6. It'll Help You Feel OK About Sticking Out From The Crowd

Dare to get a tramp stamp. Be bold enough to get a sleeve, even if people ask you how it'll look with a wedding dress on. Get a neck tattoo even though the consensus is often that you'll never get a job. Get something big and colorful even though you know it won't be everyone's cup of tea.

Becoming comfortable about sticking out when you're in your early 20s is hard, but getting a tattoo can break that ice for you. Plus, it'll show you that breaking away from the crowd is a point of pride, thus allowing you to let your freak flag fly.

7. It's Not Really That Big Of A Deal

One of the biggest reasons I've heard people have for not getting inked is that they're worried they'll regret it. They don't want to be 35 and have something silly etched onto their bod that they got on a drunken excursion in Thailand. But honestly, even if you hate it 10 years down the road, you'll likely love that you hate it. You got it during a time when you were slightly reckless and full of fun, and you did it for reasons that were huge to you back in the day.

Having that part of yourself printed on your body forever is its own kind of wonderful.