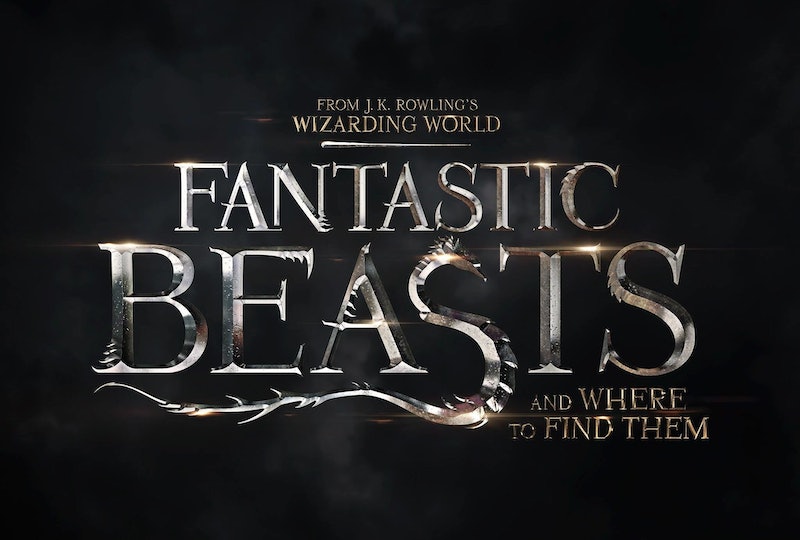 A staple of the Hogwarts reading list since its publication in 1927, Fantastic Beasts And Where To Find Them by Newt Scamander may seem like an odd choice on which to base a new series of films. But that's not going to stop author J.K. Rowling personally writing a screenplay directed by Harry Potter 5-8 helmer David Yates and starring recent Oscar-winner Eddie Redmayne, next year's Fantastic Beasts certainly sounds promising. And now we finally have the beginnings of a plot, to boot! Released exclusively by Entertainment Weekly, the spinoff won't be a faux-documentary-style look at Scamander's research into his textbook, but, rather, Rowling's Fantastic Beasts synopsis crafts what looks to be an action-packed first entry for the trilogy:

Eccentric magizoologist Newt Scamander comes to New York (for a reason we won’t disclose) with his trusty weathered case. This case is one of those way-way-way-bigger-on-the-inside magical devices, and within are expansive habitats for a collection of rare and endangered magical creatures from Newt’s travels around globe. He discovers the American wizarding community is fearfully hiding from Muggles (who are called “No-Maj” in the States) and the threat of public exposure is an even graver concern than in the UK (remember the Salem witch trials?). Fantastic Beasts is the story of what happens when this uniquely skilled English wizard travels to wiz-phobic America and a variety of his creatures, some quite dangerous… get out of their case.

We've already met many of Scamander's fantastic beasts over the course of the eight Harry Potter movies, including acromantulas, basilisks, centaurs, dragons, grindylows, hippogriffs, merpeople, phoenixes, unicorns, and werewolves... but there are over 70 more creatures listed in the pages of the book. Here are nine creatures I hope to see rampaging through the streets of 1920s Manhattan when Fantastic Beasts debuts next winter.

In the world of Fantastic Beasts, a chimaera is a creature with the head of a lion, the body of a goat, and a serpent's tail. It is one of the few creatures with a XXXXX designation under the Ministry of Magic Classification system, denoting the most dangerous of beasts.

Unlike the chimaera, demiguises are peaceful creatures that live in the forests of the Far East. Described as ape-like in appearance, these beasts would present a unique challenge to Scamander when it came time to rounding them up: they can make themselves invisible. The hair of the demiguise is what most invisibility cloaks are made out of.

The only piece of an erumpent readers encountered in the pages of Rowling's novels was a horn, which played a key role in Harry, Ron, and Hermione's escape from the Death Eaters while at Xenophilius Lovegood's house. Very similar to a rhinoceros, the main distinguishing characteristic of an erumpent is their distinct spiraling horn, which causes anyone or anything that's impaled by it to violently explode.

Ever since the first time I read Fantastic Beasts, the Lethifold is the creature that has most haunted my dreams. Appearing as little more than a shadowy black cloak, a Lethifold will slither into a witch or wizard's bed while they're sleeping, suffocate, and devour them, leaving no trace. Like dementors, lethifolds can only be repelled with a Patronus charm.

Like a chimaera, manticores are also magical hybrid creatures, consisting of the tail of a scorpion, the body of a lion, and a humanoid face. The blast-ended skrewts featured in The Goblet Of Fire resulted in Hagrid cross-breeding these dangerous creatures with Fire Crabs — thankfully, Scamander won't have to tackle any of those, since Hagrid's experiments didn't occur until some 70 odd years later.

Nifflers are perhaps not as dangerous as some of the other creatures on this list. They're actually quite affectionate and cuddly, with their long snouts, shovel-like paws, and predilection for gold. But their cute exterior belies the havock that these beasts can wreak when left unchecked: their rapacious appetite for anything vaguely shiny will lead them to ransack everything in sight. Just imagine a horde of these let loose on Wall Street... Gold for everyone!

Scamander describes the nundu as the most dangerous creature alive — which is saying something when coming from a wizard who has faced the likes of basilisks and werewolves. This leopard-like beast doesn't even need its sharp claws or fangs to maim and kill: its toxic breath alone is capable of wiping out an entire village. It takes no less than 100 witches or wizards working together to subdue a nundu... which should make for a climactic challenge for Scamander and the other characters of Fantastic Beasts.

Similar in size to an acromantula, a quintaped is a five-legged creature covered in a rust-colored pelt. It is native only to the Isle of Drear off the coast of Scotland, which was made magically Unplottable due to the dangerous of its carnivorous residents. Quintapeds are also referred to as Hairy McBoons, since legends tells that they originated when the rival McClivert clan transfigured the entire McBoon clan as retaliation for the death of one of their own. Of course, the transfigured McBoons made quick work of the McCliverts, and have ruled the island ever since.

No matter how you feel about the film adaptation of The Goblet Of Fire, one of the biggest disappointments was that the magical hedge maze of the Third Task didn't contain any of the magical creatures or obstacle-like spells it was chock-full of in the novel. The confrontation between Harry and the sphinx is a highlight of that chapter, and it would be great to include the absent beast in this new series. Scamander may have the courage to grapple with griffins; but does he have the intelligence to match wits with a riddle-spouting sphinx?

Fantastic Beasts And Where To Find Them will stampede into theaters on Nov. 18, 2016.