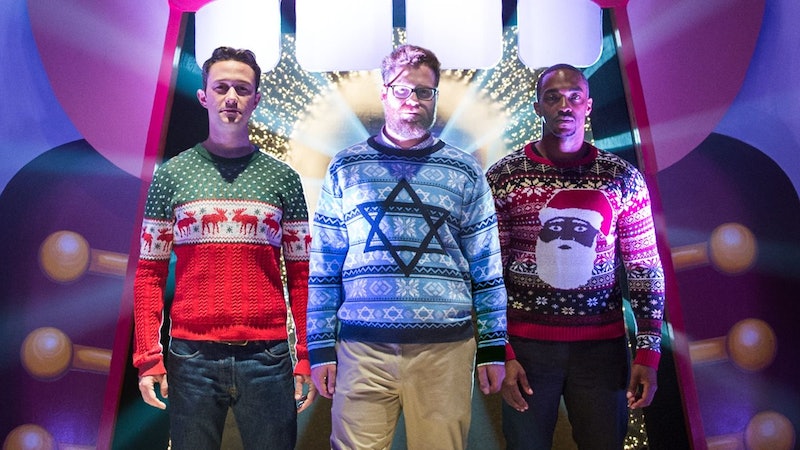 You remember The Hangover (2009). And The Hangover Part II (2011). And probably The Hangover Part III, if you're a masochist with a deep love for endless sequels. And while it's been confirmed that a fourth Hangover won't be happening, that doesn't mean there won't be another film of a similar genre inspired by the Wolfpack and their obscene hijinks coming soon. In case you weren't aware, that replacement is arriving quicker than you think. The Night Before, which will open in theaters Nov. 20, 2015, feels like the start of a series of Hangover proportions. Starring Seth Rogen, Joseph Gordon-Levitt, and Anthony Mackie, The Night Before tells the story of three friends who decide to spend their last Christmas Eve out together in pure debauchery, hitting up various holiday celebrations in New York City. And while it's not yet known of there will be a Night Before sequel, it definitely has the qualifications.

If you're not sure what I'm talking about, just check out the crazy, star-studded trailer below (oooh, hi Mindy Kaling!) and see for yourself (and, of course, catch The Night Before when it hits theaters this weekend). Doesn't this movie just seem made for a follow-up?

Here are five major reasons why The Night Before will probably garner a similar amount of popularity, therefore, sequels, as its predecessor, The Hangover.

1. The Night Before's Plot Is Similar To The Hangover's

The Hangover: Three friends travel to Vegas to party at another friend's bachelor's party. A wild night ensures. The gang wakes up the next morning with no memory of the night before and have to find the groom-to-be before his wedding by retracing the steps of said wild night, which involved drugs, alcohol, strippers, and gangsters.

The Night Before: Three childhood friends reunite on Christmas Eve — a yearly tradition of theirs. However, when one friend rises in fame while the other prepares to be a father, the friends decide to celebrate their last Christmas Eve in New York City together by going all out. Wild adventures also ensure, which involve drugs, alcohol... you get the idea.

2. The Night Before Is Produced By Seth Rogen And Evan Goldberg

These guys (and friends) have collaborated together on other films like The Interview (2014), This Is the End (2013), Pineapple Express (2008) and Superbad (2007). It can be said that the frat boy humor (often drug-laden) adventure genre is their specialty. They've got a history, and it seems likely they won't be slowing down anytime soon.

The Hangover had Mike Tyson (who actually owned three tigers at the time, did you know?). In The Night Before, Miley Cyrus appears as herself (among other surprise star cameos). And quite honestly, I can't think of a better celeb than Cyrus to throw into the mix of the raunchy sort of humor The Night Before is bound to bring.

4. Joseph Gordon-Levitt Is The Bradley Cooper Of The Night Before

The Hangover had Cooper, an actor who typically does more serious, high-brow movies, but who still took the plunge into a comedy. JGL is exactly that person for The Night Before and I applaud him all for it, because he is also one fantastic actor.

5. Both Movies Take Place In Cities Where Anything And Everything Is Known To Happen

The Hangover will always have Las Vegas, while The Night Before has decided to make New York its Sin City. As a bonafide New Yorker, I can vouch for the fact that I can totally buy a story as ridiculous The Night Before's happening on a Christmas Eve in the Big Apple. Or any other night of the week, for that matter.