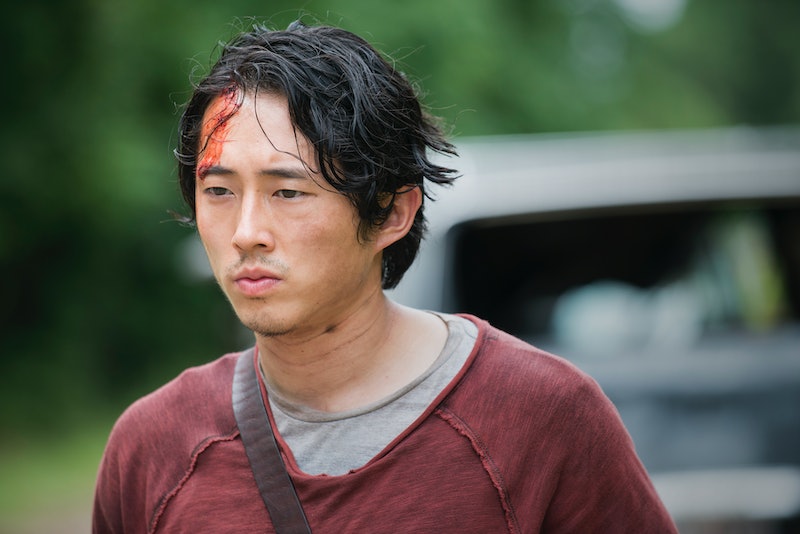 Glenn's body isn’t even cold yet (I mean, I think?) and AMC has already removed Steven Yeun’s name from The Walking Dead opening credits. We don’t even know if Glenn is actually dead yet, but, like most fans, I refuse to believe that this is the end for Glenn, the simple pizza boy who we fell in love with six seasons ago. Personally, after the major controversy surrounding Glenn’s supposed death, I feel like the writers and producers are now taunting us with his death by that very simple move last week. Like what Game of Thrones fans have been dealing with since last season, these subtle moves keep people talking long after the event. Why wouldn't they want to keep an air of mystery with Glenn’s “death”?

Here’s the thing though, his name has to reappear because even if he is dead, we would still need to see a body and he’s too important of a character to just leave without some form of physical evidence. I’m predicting that his name will be back in the next episode and that we'll get some sort of visual to answer the question on everyone's minds. But which way will it go? In order to prove my theory that the producers are simply taunting us and that Glenn will be back in some regard, I watched a lot of Walking Dead intros to see how they’ve handled deaths and the opening credits in the past.

So you know, if you don’t want to know who has died thus far, now would be the time to stop reading.

Shane Walsh was killed in Season 2, Episode 12. There were only 13 episodes in that season, but his name was included in the season finale, even though he was dead.

Lori Grimes died during childbirth in the fourth episode of the third season. Yes, she did come back in random episodes as hallucinations for Rick, but her name remained in the credits through the entirety of Season 3, even though she was not in most of the episodes.

Because Andrea died in a season finale, her name was taken off in the first episode of the following season. So technically she was removed the episode after, but I am willing to bet that if she died earlier, they would have kept her name on for at least a few more episodes.

Like Shane, Merle Dixon died in the second to last episode of a season. Therefore, they left his name in the credits for the episode that followed his death.

Even the much hated Governor got to stay in the credits in the episode following his death.

Hershel, who died in Season 4, Episode 8 also had his credit in the episode following his death. There is a chance it’s because we saw his decapitated head in the beginning, but when he returned in a flashback later in the season they did not re-add his name to the credit list.

Beth Greene’s name remained in the credits after she died as well. Her name was taken off and then brought back during an episode where she popped up in a flashback.

Tyreese is the one exception to the rest of these people. He was the only one to have his name removed from the credits directly after his untimely death. He came back for one more episode after he died, and his name was re-added for that one episode.

This break in the pattern (Tyreese was important, but not quite as high up there as Glenn) suggests that something out of the ordinary is going on with Glenn. What that actually means for Glenn fans, however, is still up in the air.