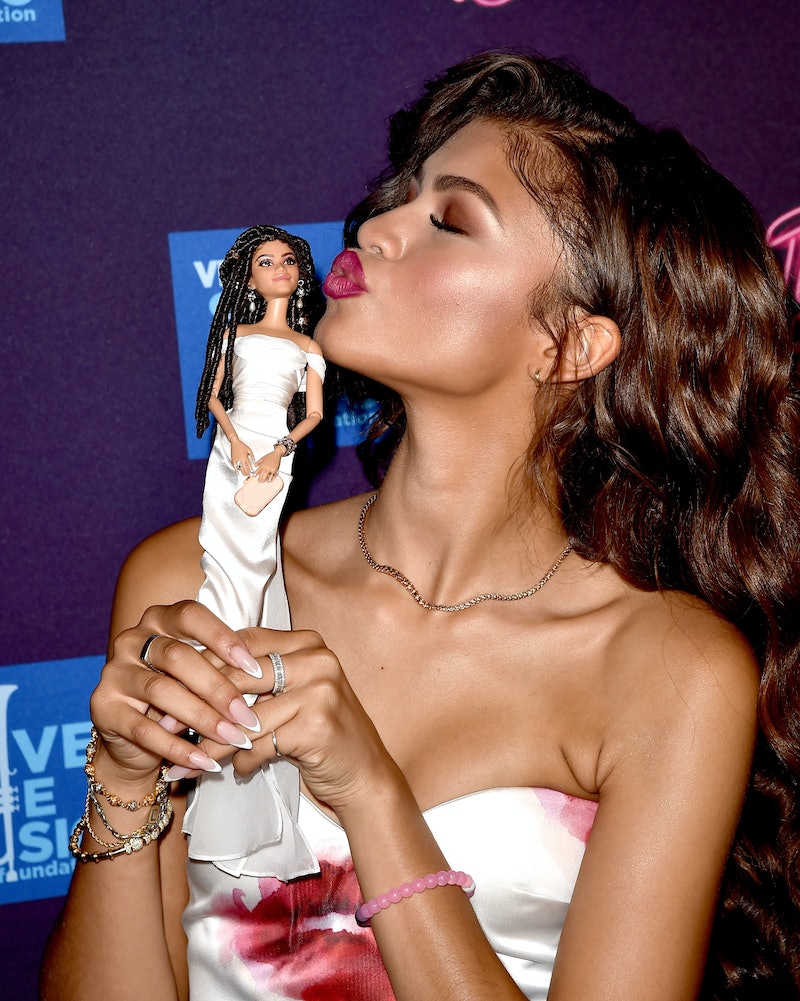 Celebrities are all about getting dolled up for red carpet appearances and award shows. But some stars out there have taken that adorable phrase to a much more literal level. Some celebrities have actually been made into dolls.

One of the most recent celebrity dolls was the Zendaya Barbie doll, released on Sept. 26 of this year. As you might remember, Zendaya was honored with a Barbie doll wearing the dress she wore to the 2015 Oscars, complete with the dreadlocks that she was criticized for by Giuliana Rancic during a now infamous episode of Fashion Police. So obviously, it was a huge deal. But Zendaya is far from the only star to be honored with a doll.

Some celebrity dolls commemorate important moments in pop culture, like the Zendaya one, while others pay homage to a super sweet moment, like the doll commemoration of Prince William and Duchess Kate Middleton's royal wedding. Some of them are a blast from the past, like the Marilyn Monroe or the Twiggy dolls. And some of them even sing. Take a look through this round up of celebrities who have their own doll, because sometimes getting dolled up just is not enough.

A huge victory for the diversification of the iconic brand, Zendaya proudly held her doll at the Barbie Rock 'n Royals Concert Experience.

Back in 2011, the hip-hop star who once referred to herself as the "Harajuku Barbie" found out that her name was a self-fulfilling prophecy when Mattel released a Barbie in her name.

The same year that Minaj was immortalized in Barbie form, Perry got the same honor, decked out in her "California Gurls" worthy cupcake attire.

She's a larger than life pop star, so it makes sense that Mother Monster would have a life-size doll, like this one made in Japan in 2013.

The Biebs' doll line, released in 2010, actually sang some of his hit songs.

You can still buy the Barbie doll of Queen Bey from her Destiny's Child days, but it'll likely cost you a lot more than a typical Barbie. Sears lists it as $165.51, for example.

The Latina pop star and actress was the inspiration for two different Barbies released in 2013. A huge win for diversification of the Mattel brand, for sure!

Talk about a great wedding anniversary present! In 2011, the year that the two country lovebirds celebrated their 15th anniversary, Mattel announced its commemoration of the couple. Aww!

Just in case you needed another couple to ooh and ahh over in doll form, the Prince and Duchess were also transformed into Barbies in 2012, in commemoration of the Royal Wedding.

The pop princess has been made into a doll many times, but you have to throw it back to her classic "Baby One More Time" doll.

Because it just wouldn't have been the late '90s without an Xtina doll, too.

Back in his *NSYNC days, the crooner was honored with his very own marionette doll. (Don't worry, the other guys were included, too.)

The late, great King of Pop was immortalized in doll form from his 1984 look, and the vintage piece is still up for grabs on eBay.

Barbie truly can do it all, and that includes rock n roll! That was proven with this 2010 commemoration of Blondie singer Debbie Harry.

The diva was honored with her own Barbie doll, donning a Bob Mackie gown. It was released in 2003.

Fun fact: the supermodel was the first celebrity who Barbie ever made into a doll. This one debuted in the '60s.

Some things just go together, and Marilyn Monroe as a Barbie is one of them. That's why it's unsurprising — yet so necessary — that the iconic superstar rounds off this list with her Barbie.

It is worth applauding all those on the list. After all, it's a huge honor to have a doll made in your likeness. It's a sign that you will be unforgettable, as all of these talented folks are.