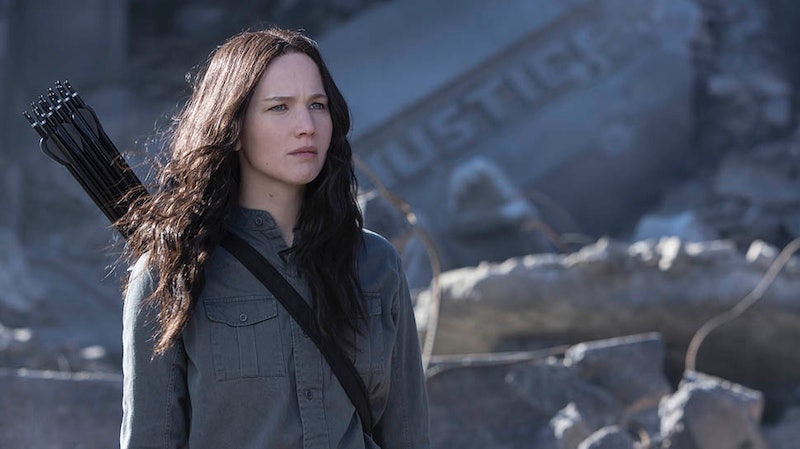 If you're a true HG fan, you're probably psyched for the upcoming release of The Hunger Games: Mockingjay, Part 2. This is the fourth and final film in the franchise, covering the story from the latter half of the book Mockingjay. In some ways it's great that the book was split into two movies, because it means that more detailed material from the novel can be included. But it also means that in order to fully appreciate all of said details, you need to be current with the story from the previous movies — particularly the most recent one. So, where can you watch Mockingjay, Part 1 online before heading to theaters to see Part 2?

Your first instinct might be to head to Netflix, in which case you might be disappointed: although the service has the DVD of Mockingjay, Part 1 for rental, there is no streaming option for the film (yet). But no worries; Amazon Prime and HuluPlus have you covered. You can stream Mockingjay, Part 1 for free on either of these platforms— as long as you're a member. If neither of these apply to you, there's still the option of purchasing the movie for streaming through Amazon or another digital vendor like iTunes. Sorry if it's a mild convenience... but the good news is that there are lots of other Part 1 movies online for free so you can prevent this situation from ever happening again. Check out these first-half movies online so you'll be ready to watch their sequels.

Maze Runner: Scorch Trials was just released in September, but the original 2014 adaptation of the YA dystopian novel is available on HBOGo now.

You can catch the first installment of Quentin Tarantino's Kill Bill series on Netflix. And a bonus: Netflix has Volume 2, too!

Because Hollywood hadn't made enough money off of J. R. R. Tolkien's stories after all three parts of The Lord of The Rings, they decided to make a three-part prequel out of its predecessor The Hobbit. The second and third films are currently available on HBOGo.

The infamous 2013 art film was split into two parts, both of which were also released with an extended director's cut. And guess what? Both versions of Volume I and Volume II are available on Netflix, for a combined runtime of almost nine and a half hours if you were to watch all four in a row.

It can be hard to stay on top of all the film series which have multiple parts nowadays, but the internet is definitely helpful in playing catch-up. Do your best to rewatch Mockingjay, Part 1 online, and you'll be ready for all the action in Part 2 when it hits theaters Nov. 20.