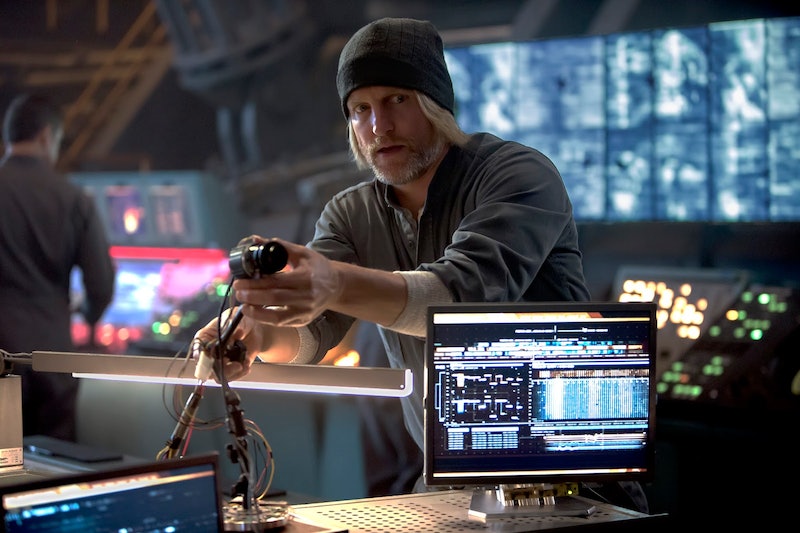 Fellow Hunger Games fans — the end is near. Can you believe it? As we get closer and closer to the film finale of the franchise with Mockingjay, Part 2, coming a theater near you on Nov. 20, I can't help but reflect on the future fates of all my favorite characters. In particular, although I'm obviously #TeamKatniss, I'm worried about Haymitch; I have a soft spot for the guy, portrayed in the films by Woody Harrelson. I want to know that what happens to Haymitch after Mockingjay is OK, and that he gets the ending he deserves.

Because while it would be easy to pin Haymitch as simply being the local drunk, his character evolves throughout the franchise and became a major, driving force of the rebellion plot during the 75th Games. The question now is, does Haymitch get a happy ending after the thrilling Hunger Games conclusion to come? (Well, as happy one can get in the Hunger Games world.) Spoilers ahead!

According to the books, Haymitch's ending is left somewhat open, but it's not nearly as bad as it could have been. We do know that he lives (yay!) and returns to District 12 to take up raising geese after the rebellion. It can be assumed that he remains alone, since President Snow cruelly killed his mother, younger brother, and girlfriend after he was made victor.

While geese can be charming (?), they're hardly a suitable replacement for a family and loved ones. And while Katniss and Peeta get a well-deserved ending that involved marriage and having children, I won't say that Haymitch necessarily should have found love. If he wanted to enter a healthy relationship, he would first have had to quit drinking and come to grips with all he'd endured since he earned his title of being the first victor from District 12 to win the Hunger Games, and that didn't really seem in the cards.

Alternatively, I would have loved to see Haymitch not live on his own, but reside with Katniss and Peeta as the quirky, slightly-unstable uncle to their children. As their mentor and ally in the takedown of President Snow and the Capitol, it seems only right that they'd get to live out the rest of their days together as a makeshift family of survivors, who can lean on each other for support for years to come. Because despite their newfound freedom, there's still a lot of healing to be done from the trauma and loss acquired during the Hunger Games and rebellion.