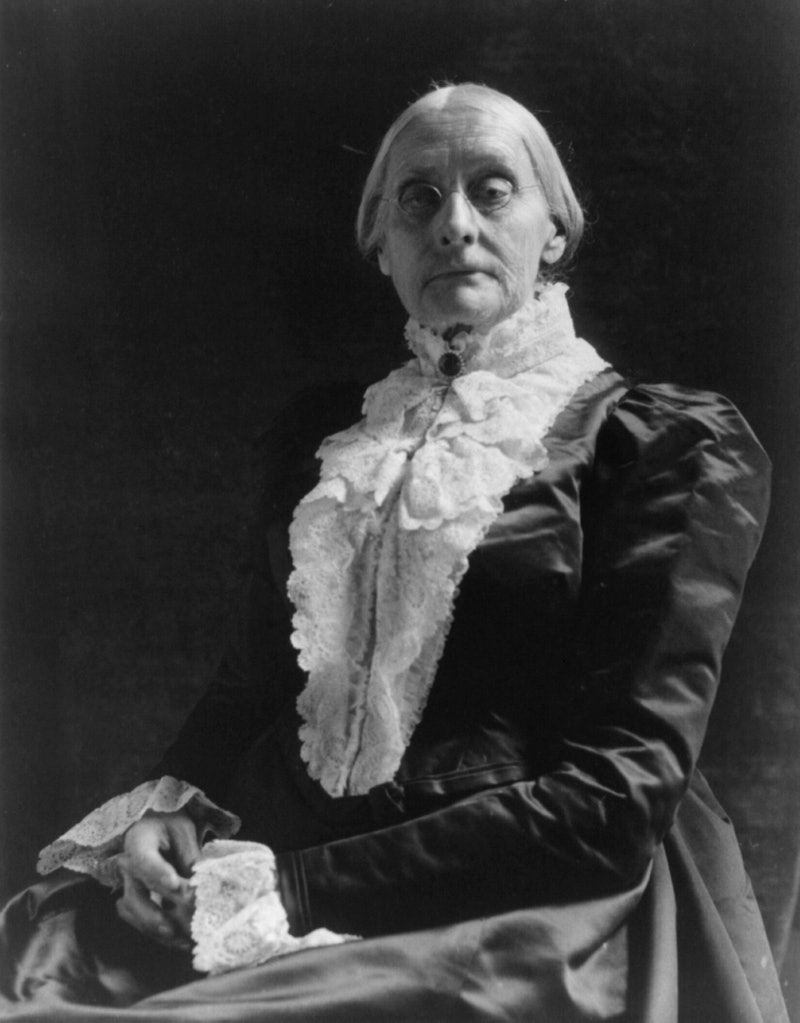 The stern looking lady in that photo up there is none other than famed suffragette Susan B. Anthony, cast a vote for Ulysses S. Grant in 1872 on this day in history, decades before women gained the right to vote. She was arrested on Thanksgiving of that year for the crime of voting, despite her firm belief that the 14th and 15th amendments guaranteed the woman's right to vote. The 19th amendment wouldn't be passed until 1919 or ratified until 1920.

Susan B. Anthony was a total badass. She started her lifelong pursuit of racial and gender equality at the age of 17, when she began collecting petitions for the abolition of slavery. She started the American Equal Rights Association, fought for black men and women to be allowed in public schools and colleges, campaigned for the right for women to own property and divorce their husbands, and worked with Harriet Tubman on the Underground Railroad. Nowadays, lots of intersectional feminists rightly point out that many first wave feminists were horribly racist (just as many abolitionists were sexist) but Anthony was also one of the most racially progressive of the bunch — she supported full integration, equal rights for everyone, and the abolition of slavery throughout her entire life. And just read her reaction to being arrested for voting as recounted by American Heritage:

On Thanksgiving Day, Thursday, November 28, an imposingly tall, impeccably attired, and very fidgety gentleman presented himself at the Anthony family’s front door. After a few nervous comments about the weather he began hesitantly, “Miss Anthony,” but could not continue.

“Won’t you sit down?” she said pleasantly.

“No thank you. You see, Miss Anthony …,” he stammered. “I am here on a most uncomfortable errand.” He hesitated again. “The fact is, Miss Anthony … I have come to arrest you.”

The unhappy deputy marshal, E. J. Keeney, seemed about to collapse, but he pressed on. “If you will oblige me by coming as soon as possible to the District Attorney’s office, no escort will be necessary.”

“Is this the usual manner of serving a warrant?”

Keeney blushed and drew the warrant from his pocket. It said she had violated an act of Congress.

The possibility of arrest had never occurred to Anthony, but she kept her composure. “I prefer to be arrested like anybody else. You may handcuff me as soon as I get my coat and hat.” Keeney refused.

In honor of Susan B. Anthony and the 15 other woman who, at Anthony's urging, voted and were arrested on this day 143 years ago, here are some other ways that women's rights have changed since 1872, besides the obvious right to the vote. After all, we still have a long way to go, but look at how far we've come:

1. Women Didn't Have the Right to Their Own Income

Early on in American history, when a women was married all her property became her husband's. Women also couldn't sign contracts or have a separate salary. Though there was some state-by-state piecemeal progress on this in the 19th century, in 1887, one-third of the states didn't allow women to control their own income.

2. Women Couldn't Be Lawyers, Politicians, or Many Other Careers

In fact, the very year that Susan B. Anthony illegally voted, the Supreme Court upheld women being barred from serving as lawyers.

3. Women Could Be Fired for Becoming Pregnant

This was allowed until the Pregnancy Discrimination Act was passed in 1978, people.

But they could be tried for crimes in front of juries. So much for a "jury of one's peers."

5. Women Couldn't Divorce Their Spouse Without Showing Cause

And, in some cases, were barred from receiving divorces if they couldn't prove that cause.