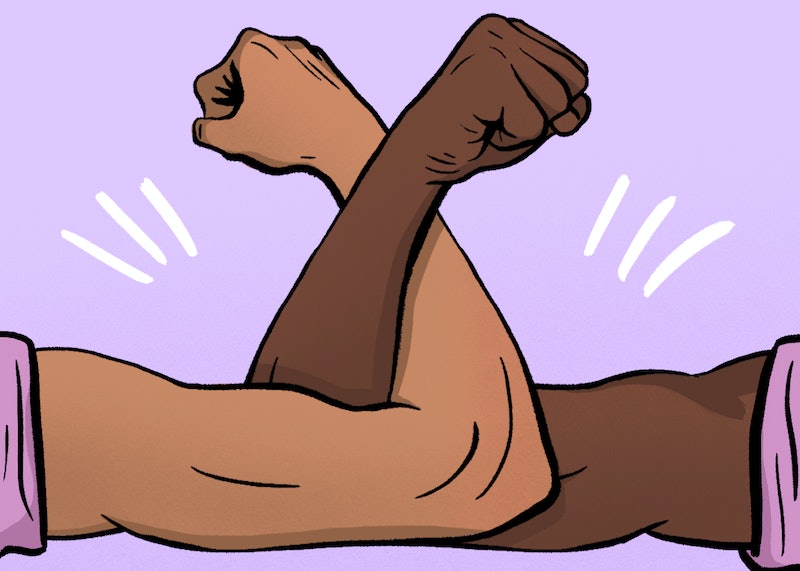 August 18 marks the 95th anniversary of the 19th Amendment to the Constitution, which granted women the right to vote. This day, August 26, is also known as Women's Equality Day. While this is a huge day for both women’s and human rights, there's clearly still so much work to be done. Let's take a quick look at the facts, shall we?

… and the list goes on and on and on.

The ratification of the 19th Amendment was a huge victory, but it addressed only one of the demands presented by early feminists. The questions 95 years later are "Where are we now?" and "Where do we go from here?" In order to understand the answer, we have to know our history. Here is a (very brief) look at the the first three waves of feminism, and where we might be going.

We generally mark the beginning of the feminist movement in the United States as 1848, the year of the first women’s rights convention in Seneca Falls New York. But doing so robs feminism of some of its most important mothers. It is more accurate to say that the first wave was feminism’s political movement, which began long before Elizabeth Cady Stanton and Susan B. Anthony.

1630s – Anne Hutchinson challenged the Puritans’ male hegemony by teaching both women and men in her home.

1659 – After Hutchinson’s banishment and death, her friend Mary Dyer took up her cause and was executed for preaching equality of the sexes.

1776 – Abigail Adams wrote a letter to her husband, John Adams, warning him not to leave women’s rights out of the Constitution. “If perticular care and attention is not paid to the Laidies we are determined to foment a Rebelion, and will not hold ourselves bound by any Laws in which we have no voice, or Representation [sic],” she said — an elegant insight that the founding father laughed away.

1782 – Deborah Sampson took her late brother’s name and dressed as a man to fight in the Revolutionary War. She was injured, discovered, and honorably discharged in 1783.

1848 – Elizabeth Cady Stanton (above) and other leaders of the Seneca Falls Convention rewrote the Declaration of Independence into their own Declaration of Sentiments, calling for full rights of citizenship for women, demanding women’s right to keep their own wages and property (ironically, American women at this time were victims of taxation without representation), demanding access to the same education levels, jobs, and wages as men, and demanding the right to vote.

1849 – Women were allowed to practice medicine in the United States, with Elizabeth Blackwell becoming the first woman to receive a medical degree.

1851 – Sojourner Truth (above) delivered her "Ain’t I a Woman" speech at the Ohio Women’s Rights Convention. She, along with Lucretia Mott and Lucy Stone, spoke for both the abolitionist and women’s rights movements. The two movements worked together until the conclusion of the Civil War.

1870 – The passage of the 15th Amendment gave black men the right to vote. Feminists expected women to be included in this amendment. When they weren’t, a schism developed. Some suffragists, led by Elizabeth Cady Stanton and Susan B. Anthony, felt betrayed by the abolitionists and split off to form their own suffrage movement, focused solely on women’s (consequently, solely white women’s) right to vote. This racial division would last through the first and second waves.

1900–1920 – The second generation of first-wavers, led by Carrie Chapman Catt, began the political campaigns first-wave feminism is most remembered for. At the same time, a radical branch of suffragists, led by Alice Paul and Lucy Burns, determined to settle for nothing less than a federal amendment to the Constitution. They picketed the White House, facing repeated beatings, arrests, and deplorable workhouse conditions. Their very public suffering helped turn the nation’s attention and compassion to the vulnerability of women’s positions in society.

1920 – The 19th Amendment finally passed, giving women the right to vote — a great victory for white women. Just as the abolitionists had decided not to back the feminist cause in 1870, white feminists in 1920 decided not to press the cause of black women — most of whom lived in Southern states, which would continue to marginalize them and make it nearly impossible for them to vote for the next 40 years.

Just as abolitionism catalyzed first-wave feminism, the second wave received its initial surge from the Civil Rights movement of the 1960s. The interim years had proven that a political movement wasn’t enough. The de jure rights of race and sex did little de facto. What was needed was a social movement.

Racism and sexism soared after World War II, as America desperately struggled to redefine its identity and reclaim a perceived innocence that years of depression and war had supposedly stripped away. The affluent white male reinforced himself as the pinnacle of society. As a result, far fewer women received college or graduate degrees or pursued skilled jobs than they had in previous decades. African Americans in the South experienced battles over school integration, and intense violence was directed at activists like the Freedom Riders.

Over the next 20 years, the social feminist movement would change society’s views on rape, abortion, and sexual harassment in the workplace. They would ensure that government organizations tasked with protecting women did their jobs. The movement’s slogan was “the personal is political.”

1961 – At the urging of Eleanor Roosevelt, President Kennedy established a Presidential Commission on the Status of Women. The commission revealed that women were not educated to the same level as men, nor did they participate in economics or politics at the same rate as men.

1963 – Betty Friedan’s book The Feminine Mystique described "the problem that had no name" (at least, the problem for straight, middle-class, white women). Friedan wrote about how women were stifled in the home, undereducated, and treated as children. The Equal Pay Act of 1963 passed this year, stating that men and women should receive equal pay for equal work.

1968 – Alice Walker’s first collection of poetry was published. She went on to publish many more works of poetry and short fiction, but is best known for her novels, such as The Color Purple. She, along with Toni Morrison and bell hooks, voiced what it meant (and means) to be a black woman in male-dominated America, overlooked by the white feminist movement.

1969 – A group of 400 feminists protested the Miss America Pageant, drawing global media attention. However, contrary to popular myth, no bras were actually burned.

1970 – NYC elected Bella Abzug, a leader in the feminist movement, to Congress.

1973 – Roe v. Wade, which ruled that states could not ban abortion, changed the landscape in women’s fights for control over their own bodies.

1974 – The Equal Credit Opportunity Act passed, enabling a woman to take out a credit card in her own name, rather than her husband’s.

In spite of its social success, the second wave broke in the late '70s. The racial division that plagued the first wave remained throughout the second, and expanded from a black/white divide to include divisions along economic lines, between various minorities, and between lesbians and straight women. The internal divisions fractured the larger movement into competing factions, which disillusioned many feminists and society as a whole.

The 1980s saw a second feminist backlash. Generally, this decade declared itself post-feminist. The daughters of the second-wavers built their own wave as more of a reaction against the second wave than a cohesive movement of its own.

Third-wavers were eager to dissociate from what they viewed as their mothers’ botched legacy. They decided to take back feminism, to redefine it. However, unlike the first and second waves, third-wave feminism never found a cohesive structure. It was deconstructionist in nature. Every woman could redefine feminism in her own way. Instead of a political or a social movement, this new feminism was individual.

1991 – The punk band Bikini Kill published the “Riot Grrrl Manifesto” and began a radical feminist musical genre that took off around the world, calling out for the empowerment of women’s voices and taking up the issues of violence against women and homophobia.

1992 – The Anita Hill case inspired Rebecca Walker, Alice Walker’s daughter, to publish a call for a new wave of feminism, titled “Becoming the Third Wave.” She summed up the individualist, deconstructionist nature of the movement in the final statement of her article: “I am the Third Wave.” Walker didn’t try to speak for women collectively — she spoke to each woman individually.

1994 – The Violence Against Women Act was passed.

1998 – After gaining notoriety for their billboards and posters throughout the previous decade, the Guerrilla Girls staged a protest at the San Jose Museum of Art over its lack of representation of female artists.

Where Are We Headed?

The third wave didn’t end so much as it was overtaken by a new wave of eager, tech-savvy millennials growing up in a post-9/11 society. The Internet has created a digital world that transcends borders and has brought feminists new ways to unite and speak out about oppression and injustice.

Since then, Fourth-Wavers have expanded on the third-wave fight against the portrayal of women in the media (and now online, as well) and brought attention to male domination of the news and entertainment industries — things that clearly shape culture. As the Internet has provided an endless supply of advertisements objectifying women’s bodies and entertainment sites perpetuating unrealistic beauty standards, feminists have fought back using social media, blogs, and websites.

We still have much to accomplish before we can say that we live in a truly egalitarian society, and it won’t be easy. However, if we remember to link our past to our present, with all the new technological tools we have at our disposal, then why can’t the fourth wave finally finish the work our earliest foremothers began?

Don’t let this anniversary pass unnoticed. Let our history inspire us to move forward, bold and unafraid and bolstered by women — both those who have gone before and those who surround us now in our global, digital fourth wave.