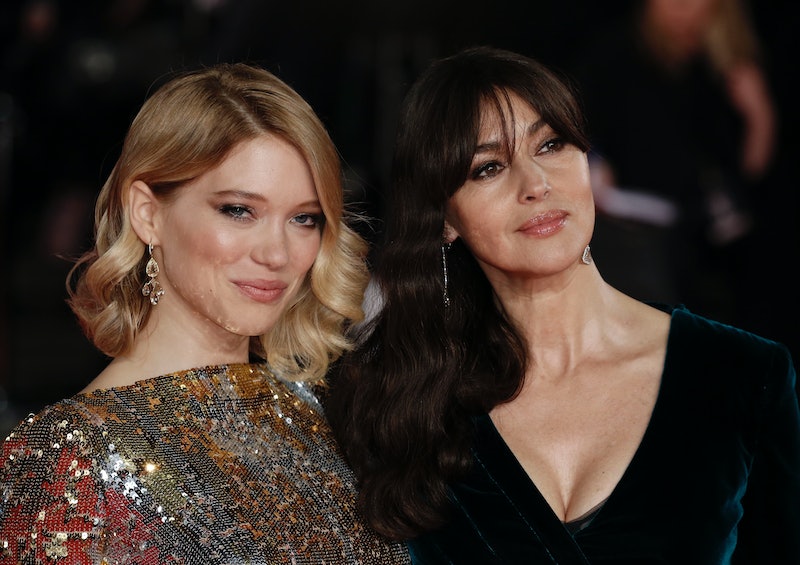 When you think of a Bond girl — or, a Bond woman, as I like to call them because it's a much better term for the title — what comes to your mind? It depends on what generation you were born into really, but one thing's for sure: Whoever you think of — be it Ursula Andress, Halle Berry, Eva Green, etc. — the Bond woman fits into a certain type of mold. Because the Bond woman, above all else, is a certain kind of character: Pop culturally speaking, she's long only really been celebrated for her femininity and classic beauty, which is a sad reality. But, in the newest installment of 007, Spectre, we're about to be given a new kind of Bond woman — actually, two of them — and guess what? They aren't afraid of breaking that mold. The Bond franchise welcomes Monica Bellucci and Léa Seydoux, who are advancing the role of "Bond woman" in ways that it's never been advanced before. All while stealing the screen and taking names in the process.

Seydoux, who plays the daughter of an assassin, Madeleine Swann, might seem like your average run of the mill Bond woman: Young, blonde, beautiful. But Seydoux doesn't see her role as limiting. As the actress said when she sat down with Screenrant to explain her character: "I think it is the first time that we see Bond in love….I like her because she is a very independent [woman]. She is a strong character... She knows how to protect herself." From the sound of this, it looks like Bond might have finally met his match, romantic and otherwise. It will be refreshing to see that side of Bond, as well as a female character with a deeper story line. Ever since the Bond womanwas introduced to us in the '60s, the prototype for her was, well, less than progressive. Thankfully the Bond woman has been shifting for quite some time (over the years she's become stronger, smarter, fiercer, more able to hold her own alongside Bond), but we've never seen Bond really fall in love since Eva Green's character, Vesper Lynd, in Casino Royale. Perhaps because we've never had a Bond girl quite like Seydoux's Madeleine to make that happen.

Monica Belluci's role in the film is game changing as well. She also told Screenrant, "I said, 'what am I going to do at my age, 50 years old, in Bond.' He was looking for a mature woman. Lucia is an Italian widow with secrets. Actually she doesn’t have the beauty of the youth anymore, but she has her femininity and this is going to save her." The representation of a woman over the age of 30 as feminine and desirable in a Bond film is actually a groundbreaking move, and something worth praising.

Belluci explains that there's a certain evolution of femininity in the movie that's highlighted by her character's arch. "I like the evolution of the femininity in the movie….Yes, she [Lucia] comes from a world where men have the only power. She actually tries to escape from this situation, and she needs Bond. Madeleine, she is the modernity of the future, so it is beautiful to see the evolution actually."

Although this seems like a subversion of everything that's thus far been discussed, and a retreat back to the original Bond woman who's dependent on a man, Belluci's not far off to see the beauty in this story line. Belluci represents Bond women of the past, and how problematic their reliance on beauty and femininity have become. The new generation, like Madeleine, or the "modernity of the future" as Belluci puts it, doesn't need to rely on anything but themselves. The clash of these two ideals — the outdated Bond woman being saved and the modern Bond girl saving herself — strikes something huge here. If we can look forward to modern Bond women like Madeleine, we can put to rest the outdated notion that a woman needs to be reliant on her femininity in order to have power.

With characters and story lines like this, maybe were not so far away from the ultimate Bond woman — you know the kind that has her own franchise. Just putting that out there.