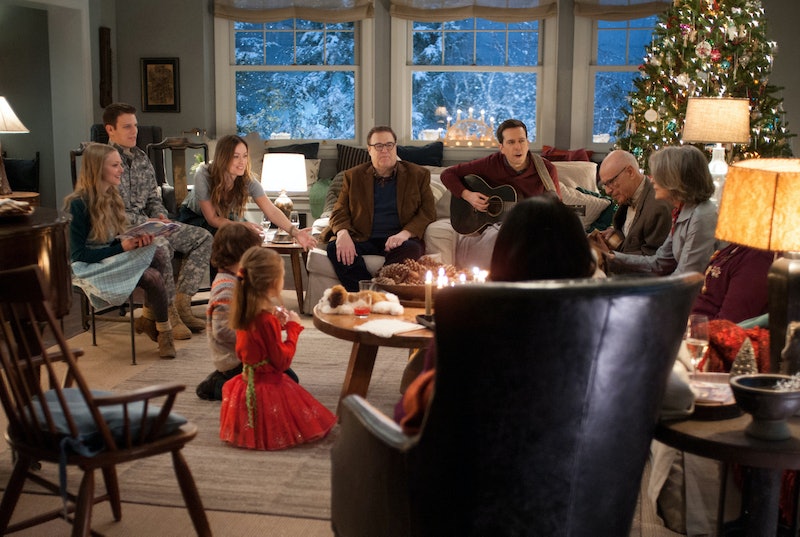 Diane Keaton is officially the queen of holiday movies about dysfunctional families. This year, the Academy Award-winning actress takes on the role of yet another Christmas season matriarch in Love the Coopers, a role that parallels her role in the 2005 favorite, The Family Stone. The two films are not exactly alike, but they both evoke the same joyous holiday spirit associated with disastrous yet loving family reunions that many can relate to. Ultimately, Love the Coopers is the new Family Stone, in all the best, craziest ways.

While, as I said, the two films aren't identical by any means, the similarities can't be avoided considering both Love the Coopers and The Family Stone fall strongly into the genre of "dysfunctional family dramedy set around Christmastime." In each the two films, Keaton plays a rattled mother trying to maintain the sanity of her entire family. In The Family Stone, the actress is Sybil, a bohemian mom of a liberal family, and in Love the Coopers, she plays Charlotte, a put-together, New England-type who is a bit uptight, but ultimately lovable. In both films, it's no spoiler to say that in the end, Keaton's character gets her family to enjoy being together during the holidays, but she has a hell of a time trying to keep it all together along the way. For some reason, the holidays (in movies and in real life) are a time when siblings regress to being bratty brothers and sisters, and as these two films show, reunions just inevitably get worse before they get better.

From there, the movies' similarities check all the boxes of your typical dysfunctional family dramedy. Both films take place in an East Coast suburb, and both feature a supportive patriarch played by a popular sitcom star from the '90s. The Family Stone has Craig T. Nelson from Coach playing Kelly, and Love the Coopers has John Goodman from Roseanne as Sam. Both movies also have a typical holiday dinner that is bound to go wrong, as well as a son or daughter coming home to introduce his/her significant other to the group (more on that later).

And what would a family movie be without a star-studded ensemble cast of siblings, all of whom have issues, usually involving their love lives? In The Family Stone, the oldest son, Everett (Dermot Mulroney) brings home his new girlfriend, Meredith (Sarah Jessica Parker) to meet the family. To his dismay, the family isn't too fond of her. In Love the Coopers, meanwhile, daughter Eleanor (Olivia Wilde) brings home her boyfriend, Joe (Jake Lacy), a military man who the family takes a liking to. There is one problem, though — he's not really her boyfriend. She met him in the airport and asked him to come home with her and act like her boyfriend in order to appease her nagging mother. So while the details of the two films' romance-centric issues may be different, the heart of them — bringing home a significant other, facing your judgmental family — is similar in every relatable cringeworthy way.

Then there are the other members of the family. Ed Helms from Coopers fulfills the troubled suburban parent part that Elizabeth Reaser filled in The Family Stone; Emma (Marisa Tomei), as Charlotte's younger sister in Coopers, serves as a good representation of the liberal-minded and misunderstood characters played by Rachel McAdams and Luke Wilson in The Family Stone. Even more, each movie also has gay characters confronting their sexual identities. In The Family Stone, the youngest son, Thad (Tyrone Giordano), talks about adopting a child with his partner. In Coopers, viewers are introduced to Officer Williams (Anthony Mackie) when he arrests Emma for shoplifting, and he later spills to "life coach" Emma that he is in the closet.

The similarities aren't a bad thing, of course; in fact, they'll make you appreciate each movie even more. And besides, while the constructs of the two movies may be similar, the outcome and the intentions are totally different. The Family Stone focuses more on the complicated love triangles happening between the siblings and their significant others, whereas Love the Coopers is more centered on valuing your elders (hence the inclusion of actors like Alan Arkin and June Squibb) and maintaining strong bonds with your family.

In the end, both movies are the same in some aspects, but very different overall. If you like one, then you are sure to like the other. It's like watching Diane Keaton lead two different families in two different realities to holiday happiness — and who doesn't want that?

More like this
22 Movies On Netflix That Are Perfect For The Whole Family
By Bustle Editors
What’s New On Netflix: 'Never Have I Ever' & 'Indian Matchmaking' Return
By Arya Roshanian
At 14, Rachel Sennott Had A Sexual Awakening While Reading 'Twilight'
By Samantha Leach
Christina Perri Reacts To Her 'Twilight' Song Being One Of YouTube's Most-Viewed Ever
By Radhika Menon
Get Even More From Bustle — Sign Up For The Newsletter