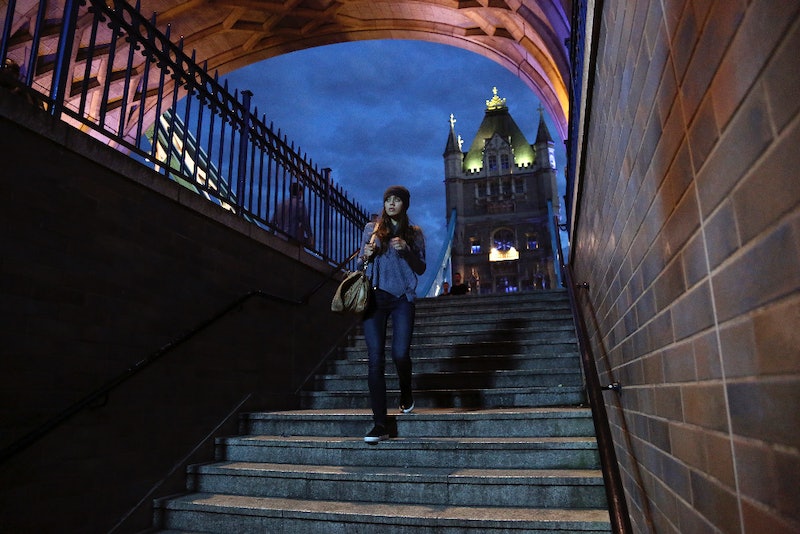 Sad but true: we may only have a season and a half left of our beloved Pretty Little Liars. Though the ABC Family series has been renewed through Season 7, there's no word yet on whether or not we will get more of the mystery series after that. (BRB while I curl up into the fetal position and sob as I ponder that thought.) Fortunately, there is some good news: while Pretty Little Liars may end in 2017, ABC Family isn't done with its twisted mysteries. According to The Hollywood Reporter, ABC Family has ordered television drama Guilt to series, and it sounds like the kind of show that may be able to help us through the impending PLL withdrawal — because it sounds a great deal like PLL itself.

The premise of Guilt is surprisingly dark, and appears to be based on a tragic real-life case. According to The Hollywood Reporter, the series is loosely based on the story of Amanda Knox, an American college student who was accused of killing her roommate while studying abroad in Italy. Knox went through an exhaustive legal battle before being acquitted for the murder in 2015. The new television series also follows an American accused of murdering her roommate while abroad — only this time, the story takes place in London. The accused's behavior is put under the microscope of the ruthless British tabloids, and as secrets begin to surface, even her own sister has doubts about her innocence.

Sounds intense, right? Here's why Guilt might just be the next ABC Family show you obsess over, Pretty Little Liars style:

1. It's All About Secrets

There's seemingly more to this mystery than whether or not the American suspect really murdered her roommate. This girl is hiding some major secrets, and even if she's not a killer, she may have other skeletons lurking in her closet waiting to destroy her.

2. The Main Character Could Be Our "Ali"

When Ali first came out of hiding, she was filled with secrets that she often protected with lies. The series seems to be setting up the murder suspect as another unreliable character, one both the audience and the characters within the show have a hard time trusting.

3. We'll Need To Piece Together A New "That Night"

Remember how the night Ali disappeared was the biggest deal ever? Well, we're getting another "that night" on Guilt: the night someone killed our suspect's roommate. Finding out the truth will be a whole new mystery to untangle.

4. It Will Feature Complex Female Characters

OK, OK: we don't know that for sure, but we do know that the series will already feature a character we have to wrangle the truth out of. Let's hope she's as complicated and interesting of a character as the series suggests she is, even if she ultimately becomes the show's villain.

Because yes, I want complex female characters with more going on than what boy they're crushing on, but I also want love triangles and steamy make out sessions on my ABC Family show, damn it! Fortunately, The Hollywood Reporter has already coined the series "soapy," which almost guarantees lots of luuurve drama on the horizon.

6. The Mystery Will Be Mind Melting

Real talk: if Guilt gets a second season, good luck getting any real answers to this mystery by the first. How else is the show going to keep us hooked?

I'm stoked for this new series, and here's hoping that it is as PLL like as the synopsis suggests it to be. We're going to need an awesome, twisted show to fill in the pretty little gap in our week.