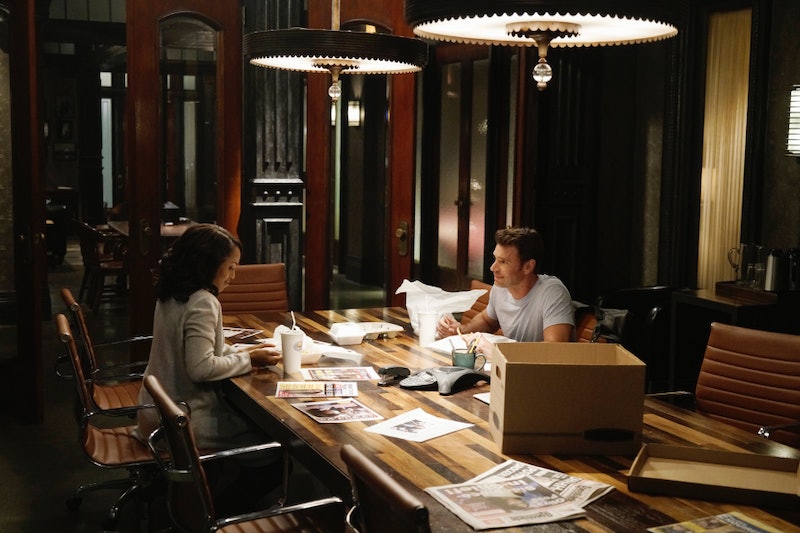 Just when you think Eli Pope — aka Rowan — can't possibly get any more evil, he totally does. On last week's Scandal, we saw Mellie get him out of jail free, and he wasted no time putting a bullet in Jake's secret wife's back. It was heartbreaking to see poor, ridiculously good looking Jake find her dead instead of alive and waiting for him, and now, he has even more motivation to get revenge against Rowan for all of the things he's done. So obviously, the fact that Fitz tasked Jake with finding Rowan on Scandal makes a lot of sense. He's the perfect man for the job — and not just because he's skilled in spy tactics.

At first, Jake was beside himself with grief... so much so that he surprise attacked Olivia, blaming her for Elise's death. OK, that's not fair — yeah, she was trying to save Fitz from being impeached, but she had no idea that meant Rowan would roam free and immediately track down Elise to kill her. So to find out later that Fitz had changed his mind and decided to track Rowan down after all, and that Jake would be the man to do it. Not a bad choice, even if it does put Olivia in an awkward position.

And, you know, the faster we can get this creepy guy out of here, the better.

And here's the best part (and by best part, I mean the worst): She had no idea, despite the visit from Jake the night before and the fact that she and Fitz are in an official relationship. She may be the almost FLOTUS, but nobody's filling her in on their efforts to, oh, kill her father? Guys, come on.

And that seems to be exactly Jake's plan. Fitz may not have directly told Jake to bring him back dead, but that's definitely his game plan, especially now that Elise is dead because of him.

Good luck escaping this time, Rowan. Jake's pretty pissed. But then again, knowing Scandal? Chances are pretty good that Rowan will live to see another episode.