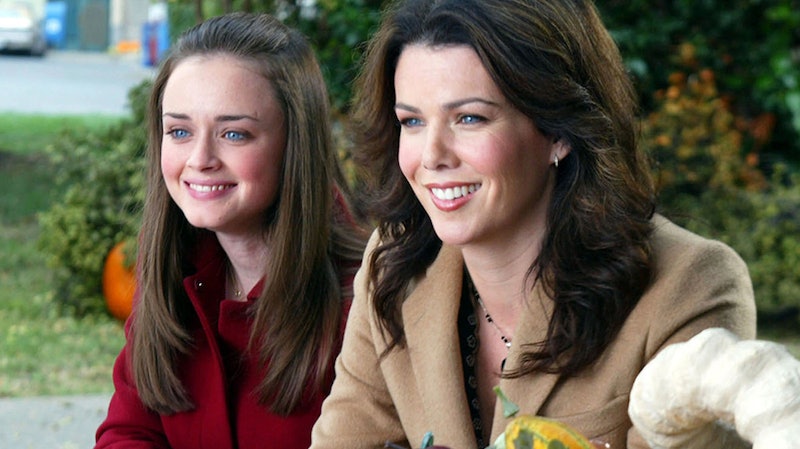 With Gilmore Girls approaching a rumored revival, it's only fitting that we look back and visit the show and the not-too-distant time period in which it debuted. For many of us, this means looking back at past episodes, but for those of us who have seen each episode multiple times (like so many times you could put on your own one-woman show for each one), there is still a lot of Gilmore Girls universe trivia that even the most devoted fans might not know about. Heck, you could watch the entire show three times on Netflix and still miss some of these little tidbits of behind-the-scenes dirt.

And for a show that feels so much like home, it might come as a shock that we don't totally know its every nook and cranny. For starters, it's nice to think that Lauren Graham and Alexis Bledel are exactly like the Gilmore girls themselves, but, if you take a look behind the scenes, it becomes apparent that these women are not clones of their characters. After all, Rory and Lorelai are like mystical unicorns — there's no way anyone in real life could match their magic to a T. It's also a little bit jarring to see how different the show could easily have been, who could have played a beloved character before casting was sealed, or what storylines ended up on the cutting room floor. And then there's the intense level of care and thought that creator Amy Sherman-Palladino put into Gilmore Girls. So yeah, there's still a lot to learn about this beloved series.

In fact, I can list 17 surprising facts about Gilmore Girls. Just get ready to have your mind blown.

1. Lauren Graham Was Warned About Playing A Mom

In a Redbook interview in 2010, Graham said that before she took the role of Lorelai Gilmore at age 32, "people were like, 'You shouldn't play a mom. People will think you're too old.' And I was like, why? People are mothers at my age." Luckily for us, Graham did not listen.

2. The Network Considered A Show With Only One Of The Gilmores

Graham mentioned to TV Guide in 2007 that the CW considered making the show focus on only Rory during the final season. She said that, "if [Bledel] was in a place where she wanted, like, her own show or her own spin-off... They were trying to think of everything." GASP.

3. There's A Reason Mother & Daughter Were So Physically Close

People praised the chemistry and physical closeness between Graham and Bledel, but there is actually a very logical reason for this: Bledel was just starting out acting and had a tougher time making her marks, so the veteran Graham often physically moved Bledel to make sure she was in the right place. Graham told this adorable anecdote to The Today Show in 2015: "The camerawork on that show is very specific and we really had to hit certain marks, which especially when you start out, is just a foreign concept...I remember a lot of times just kind of grabbing her, just kind of leading her arm. So, in the beginning, people are like, 'You have such great chemistry.' And I'm like, 'I'm mauling her. That's why.'"

4. Alexis Bledel Wasn't The Only Mad Men Actor To Get A Start On Gilmore Girls

Before starring as Don Draper, Jon Hamm played a brief and obnoxious flame of Lorelai's named Peyton Sanders. If you're looking to see your favorite shows come together, it's Season 3, Episode 5, called, of course, “Eight O’Clock At The Oasis”/“Take The Deviled Eggs...”

5. Rory's Stilted Spanish Was A Lie

6. It Wasn't Always Coffee In Those Mugs

Graham told Entertainment Weekly in October 2015 that she had to drink so much coffee on set that she would have to switch to water so that she would not "keel over dead.”

7. Gilmore Girls Was Not The Dragonfly Inn's Only TV Appearance

The exterior shots of the adorable building was sometimes the family home of the iconic '70s series The Waltons, as well as Aunt Carol's house on Pretty Little Liars, as shown above.

8. Scott Patterson Was Once A Professional Baseball Player

The actor who played Luke Danes was a minor league pitcher for the Atlanta Braves; he was very close to making the major leagues.

9. Bledel Is Not Team Logan, Team Jess, Or Team Dean

In an awesome reveal, Bledel refused to participate in the obsession many Gilmore Girls fans have about Rory's love interests, instead saying in a reunion interview with Janet Shamlian of The Today Show that she imagined Rory "seeing someone new, or she'd be single and focused on her career."

10. The Theme Song Was Actually Written About A Romantic Relationship

According to Sherman-Palladino, the iconic theme song by Carole King had been retired by the singer before the show started because she no longer liked the idea of a woman following a man, which was the song's initial narrative. Sherman-Palladino revealed this story of the theme song to Entertainment Weekly: "We got to her and what was weird is she said, 'I don't do that song anymore in concert because it's about a woman following a man and I feel that the times are different and I don't want to be singing about a woman following a man. But I love the idea of a mother and a daughter and if I could re-record it with my daughter and turn this song that I wrote into something more relevant, I would love to do that.'"

11. Jess Almost Got A Spinoff

According to a 2003 report from the Chicago Tribune, the Jess spinoff was supposed to follow the bad boy's attempts at a relationship with his father, but the show never got off the ground, as the shooting price was too high for the WB. (Some of it was shot, though.)

In October 2015, Entertainment Weekly reported that Sherman-Palladino gave credit to the actress for the town's name; Sherman-Palladino said she based the name of Stars Hollow on the iconic actress and activist's home, which is called Frog Hollow.

13. The Gilmore Girls Sometimes Had To Use Spit Buckets For All The Junk Food

If you think acting is a noble craft, just imagine Graham and Bledel spitting a hamburger into a bucket. In the Today Show interview in June 2015, Graham said that they used spit buckets, though Bledel said they often actually ate all the junk food.

14. Graham Modeled Lorelai After Her Dad

Graham was raised primarily by her father, and she told Rookie Magazine in Oct. 2015 that the Rory/Lorelai relationship was somewhat based on her relationship with her father.

15. The Actress Who Played Lane Was Long Out Of High School

Keiko Agena, who played Lane Kim, was 27 years old when the pilot was shot, a fact that she confirmed in her Reddit AMA.

Alex Bornstein was almost Sookie, and she told Buzzfeed's Kate Arthur in 2013 that she was overcommitted with a gig at MadTV. Bornstein said that, "I wanted to do both. They wouldn’t share me." Fun fact: At the time Borstein was also married to Jackson Douglas, who played Sookie's love interest and eventual husband, Jackson.

17. Lane Kim Was Based On A Real Person

According to an interview with Sherman-Palladino in Outsmart Magazine, a real life friend of Sherman Palladino's named Helen Pai inspired Lane. Actress Agena also revealed in a Reddit AMA that her character Lane was based on Pai, and Lane's band Hep Alien is an anagram of Pai's name.

Now that you know all this, can you even wait for the (alleged) upcoming season? Oy with the poodles already, indeed.