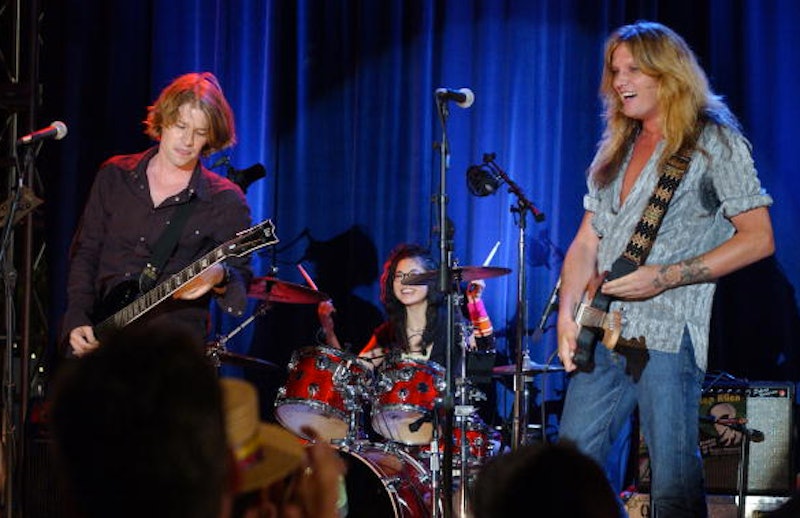 One of the many underrated shining gems in Gilmore Girls was always Lane Kim, Rory Gilmore's audiophile best friend. Lane and her musical ambitions were, in turn, at the center of Hep Alien, Gilmore Girl s ' favorite garage band. The show's recent Netflix premiere brought about something glorious in relation to this Gilmore staple: The reunion of Hep Alien. Bless nostalgia culture.

Hep Alien, an anagram of Helen Pai — Gilmore producer and best friend of creator Amy Sherman-Palladino — came to be in Season 3 when Lane teamed up with pre- O.C. Adam Brody. Brody was sadly nowhere to be seen in the reunion. Apparently Dave Rygalski takes "moving to California" pretty seriously.

But there's plenty of memories wrapped up in Zack (True Blood's Todd Lowe), and Brian (John Cabrera), with Keiko Agena on the drums where she belongs. Tragically there was no Sebastian Bach. They only reunited for the one song ("Fell In Love With A Girl" by The White Stripes) and shamefully there is no video of this blessed event, but I am grateful for whatever Gilmore reunion I can get.

The series ended with Zack going off on a tour and leaving (but not leaving leaving) wife Lane and twin sons Steve and Kwon staying behind. To rectify this I really must picture Lane seven years later back in the drum seat as a badass musician fulfilling all of her dreams.

Now if only Lauren Graham and Alexis Bledel would have brunch together and take a selfie.

More like this
'Gilmore Girls’ Lauren Graham Just Revived Our Hopes For A New Reunion
By El Hunt
Shania Twain Replaced Brad Pitt’s Name In “That Don’t Impress Me Much” At The PCAs
By Jake Viswanath
You’ve Been Singing The Wrong Lyrics To “All I Want For Christmas Is You”
By Sam Ramsden
These 'Law & Order: SVU' Throwback Pics Show 23 Years Of Shipping History
By Grace Wehniainen
Get Even More From Bustle — Sign Up For The Newsletter